On September 17, World CleanUp Day, Rio de Janeiro’s Sustainable Favela Network (SFN) members came together with community youth in Vila Cruzeiro, in the Penha Complex of favelas in the city’s North Zone, to support the Transvida Recycling Cooperative at a local public school, José Carlos Brandão Monteiro State School, for a full-day program focused on solid waste. Workshops were held on composting, recycled handicraft production, vertical gardening and more, with 113 in attendance. The first SFN member booklet was launched in support of the Transvida Cooperative, with SFN members distributing over 100 as they walked the community at the end of the day’s activities. Check out the above video, activating English subtitles, on YouTube, here. 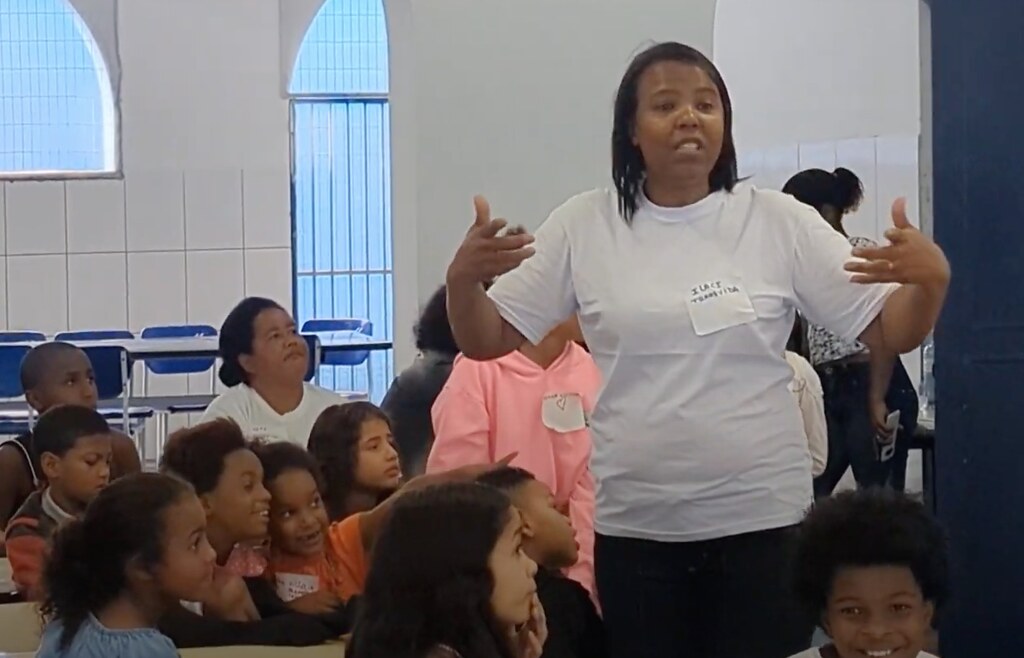 Ilaci Oliveira Luiz opened the exchange by introducing the Transvida Cooperative, a socio-environmental initiative that, as she describes, works to collect and recycle the community’s waste, ensuring a more reliable source of income to waste pickers who are among the community’s most vulnerable residents.

While developing Transvida, Oliveira noticed that many children of waste pickers accompanied their parents to help with trash collection. So she founded the Instituto Nacional Lar dos Sonhos (The Home of Dreams National Institute) to educate and engage the children of 250 families in Vila Cruzeiro, aged 3 to 16. Her goal is to “change the fate of the next generations.”

“My hope for the future is to find a space to receive the waste pickers. Because we have no space to sort through the waste! Not even the Home of Dreams National Institute has an adequate space. This makes the work harder, but we will resolve it with with deduction. We’ve been at it for 11, 12 years. We’re force, focus and power! — Ilaci Oliveira

The emotional opening was followed by the launch of the first SFN member booklet, this one focused on recycling and solid waste and the Transvida Cooperative. The booklet was produced per a suggestion made by Oliveira in 2021 that all mapped SFN community members have printed material that ties their projects to the network as a way to educate the community and supporters.

Next up, local youth split off for arts and crafts while the favela leaders from the Sustainable Favela Network had a round of introductions, followed by the day’s workshops.

The first workshop was offered by Dona Josefa, a community organizer with grassroots group Verdejar located in the favelas of nearby Complexo do Alemão. Dona Josefa introduced participants to the fundamentals of composting. She mixed a layer of soil with organic food waste and covered it up with leaves, answering questions as she went along. “Food waste is not trash,” she explained, “If more people composted, there would be much less trash in the streets.”

“We must build awareness among people to separate all their residual waste, not just adults, but also kids. Everyone should be responsibie for their own waste, which we call trash, but it’s not trash: it’s recyclable and reusable!” — Dona Josefa

Oliveira organized a workshop for children at the event to make musical instruments by reusing waste materials. Small plastic bottles were personalied by kids through paint, stickers, ribbons and sparkles and filled with a bit of rice. Rattles were created that are a common percussion instrument in Brazilian music.

A diverse, partially locally-produced and low-waste lunch was served by a team of women led by Ana Santos of the Serra da Misericórdia Integration Center (CEM), who had led an SFN exchange the prior month. She worked with the school principal who hosted the event, Rachel de Lima, and cooking staff to produce a healthy, vegetable-based lunch, then led participants in song.

“As we work in the kitchen, first of all we’re talking about a kitchen replete with affection, because we’re all women. And a kitchen with even more affection because it’s inside a school! School meals are the most importante meals for our students, for a student who lives in a favela.” — Ana Santos

After lunch, Fátima de Castro Clemente, an eco-designer and environmental educator, taught how to create a vertical vegetable garden with little space and money. Using plastic bottles and a bit of rope, she showed how spices and leafy greens can be planted in the home. When asked what motivates her, she said she believes that “Rio’s problem is trash,” and that “gardening can be a tool of environmental education.” 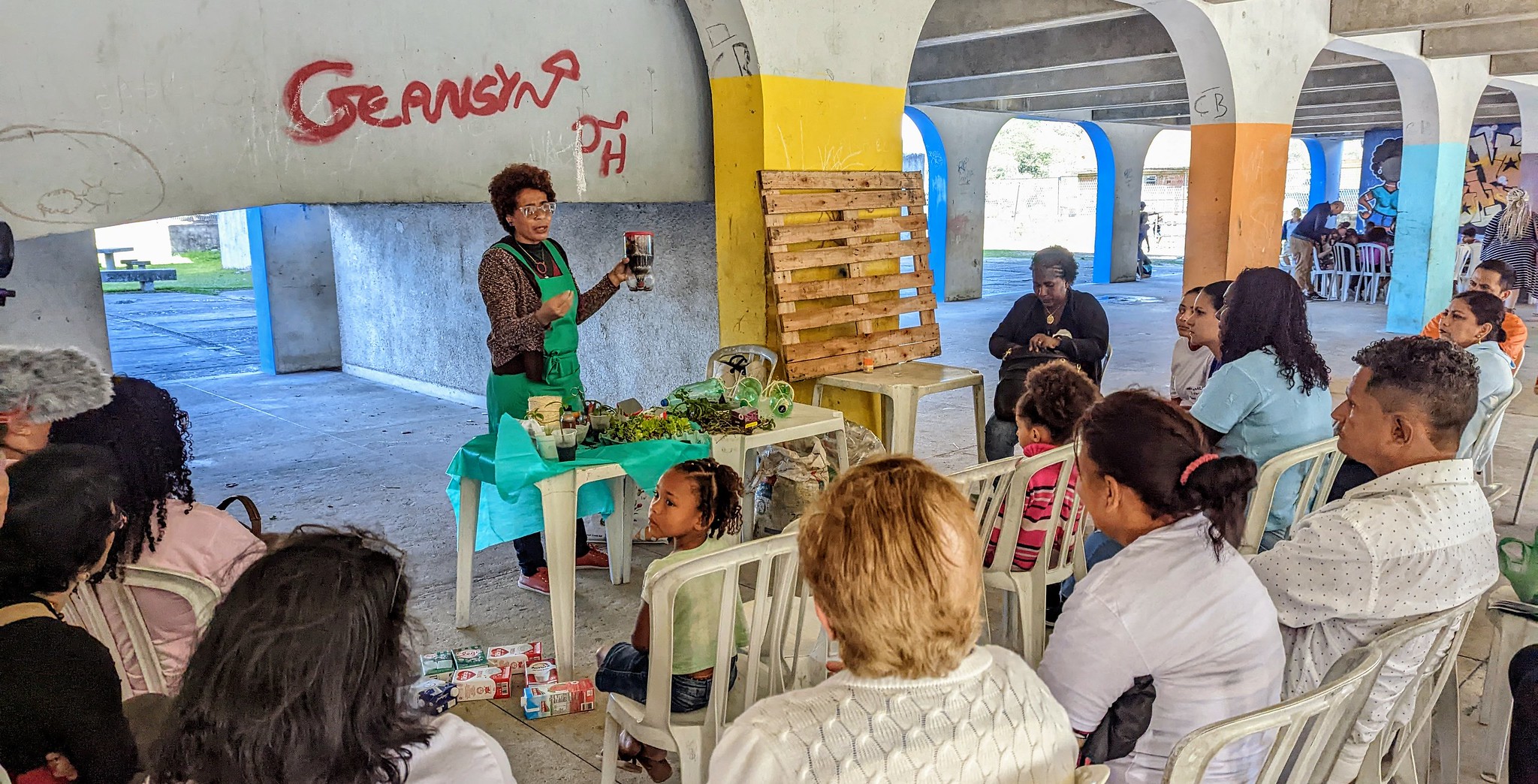 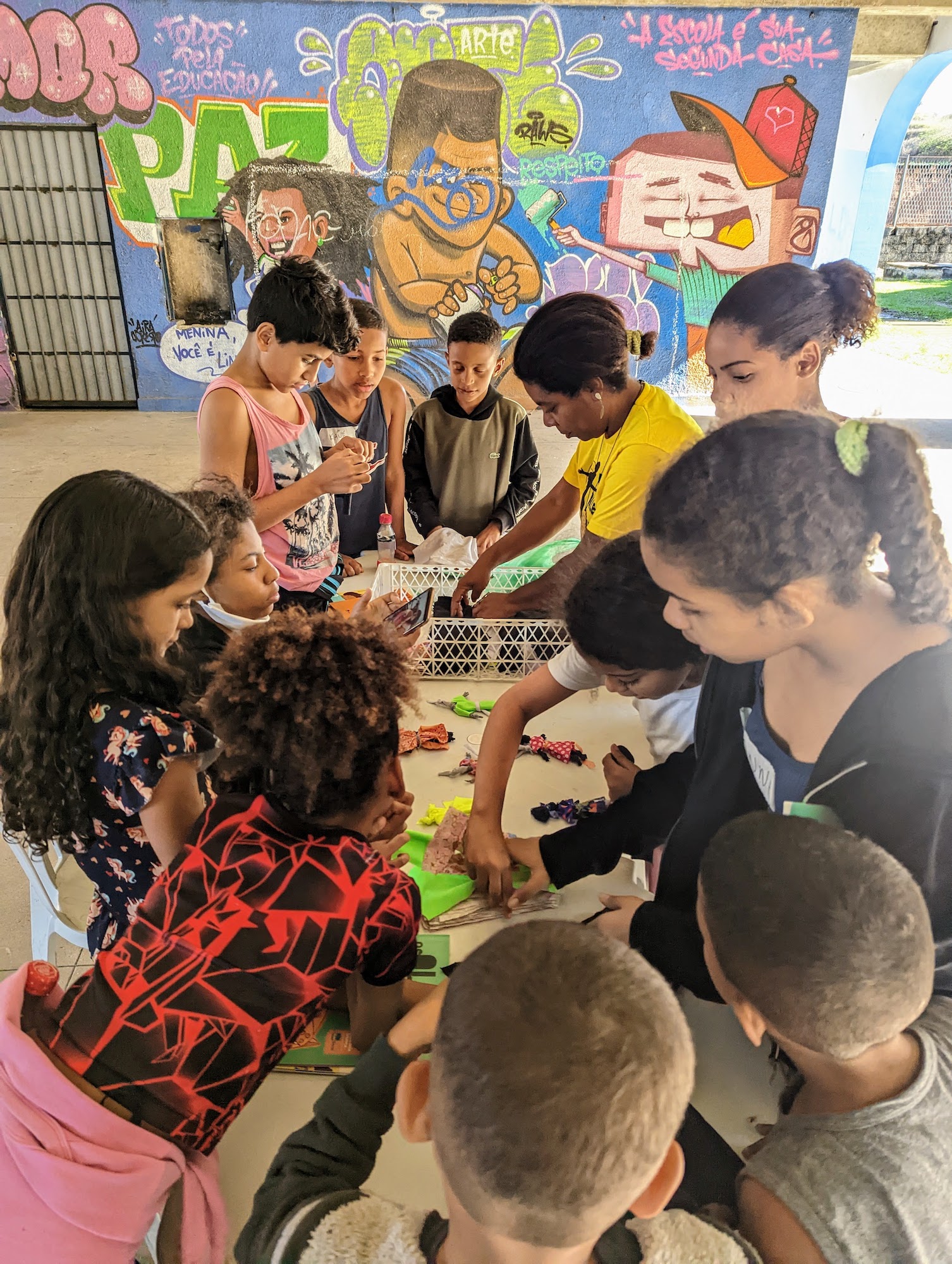 Another volunteer, Kátia Freire of the Heroes Gallery Association in Greater Rio’s Belford Roxo municipality, held a workshop for youth in the creation of Abayomi dolls that are traditionally made out of scraps of cloth. As the African dolls were prepared, she told the story of how these dolls emerged. As the story goes, enslaved women in Brazil would take scraps of cloth from their own clothes to create dolls that were cherished by their children or other kids that lived in slavery. The workshop introduced a recognition of history and the black body to the day’s events, together with a tradition of reuse of materials, stimulating the children’s creativity and joy.

The last workshop of the day was organized by Valdirene Militão from Projeto Ricardo Barriga, who demonstrated how to make colorful yet simple jewelry out of coffee capsules, illustrating that one’s own business can be built around reusing what is already available.

“Trash never leaves the planet! We have only one planet and it’s already very full. So we need to look at what we call trash, which would be that which serves no additional use, that can’t be transformed into anything else, and decide what we’re going to do with this material. What can we do to generate income from this? We need to look at the potential of what people call trash!” — Valdirene Militão 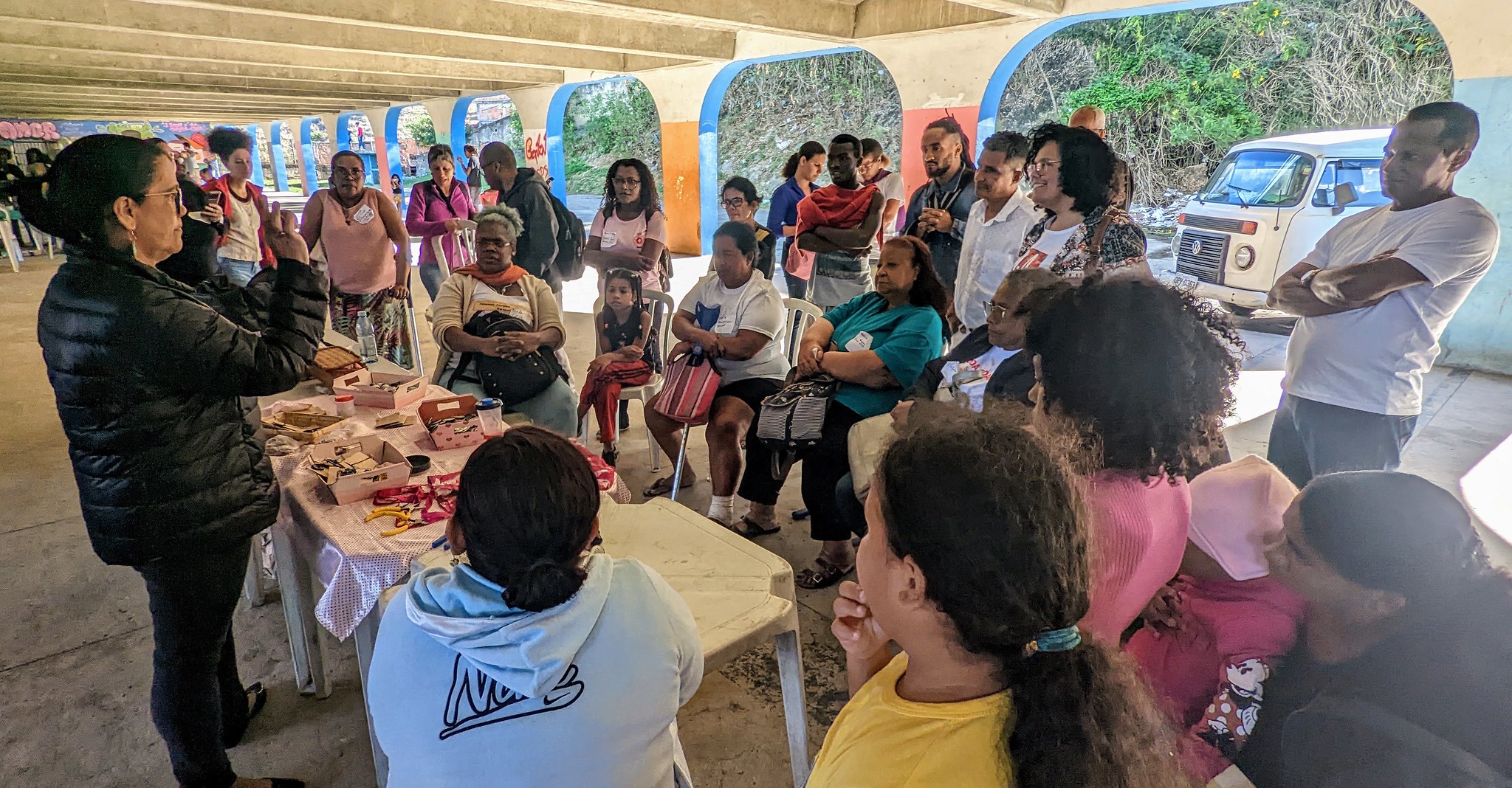 The workshops were followed by a discussion coordinated by Fabbi Silva, mobilization coordinator at Casa Fluminense, a metropolitan organization that, among other advocacy activities, maps injustices and inequality across Greater Rio de Janeiro. Silva invited the dozens of community organizers present to form groups by region and discuss issues with waste management in each of their corresponding areas. One participant talked about how the municipal waste collection utility mismanages materials separated by residents: “People separate their trash, but when it is collected, it is mixed up again.”  Another community organizer called for community mobilization using social media platforms, where residents can discuss waste problems facing their community. 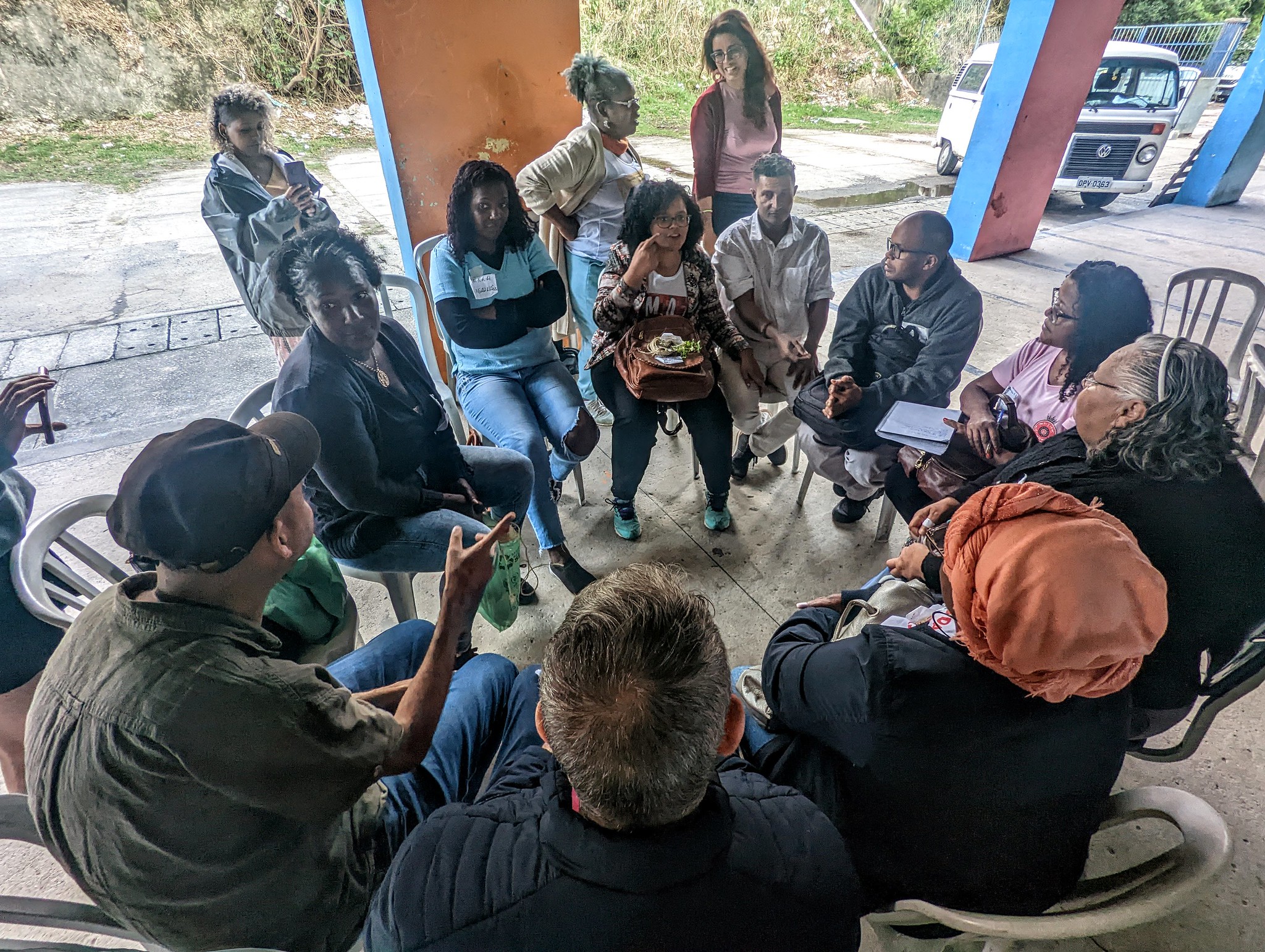 Meanwhile, as the day ended a two-man team led by André Rongo from Rio’s Graffiti Museum joined the event to paint a mural at the school. Joining art and recycling, the artistic intervention called attention to the theme of recycling, involving kids and the educational space in the discussion. The artwork remained registered with its bright colors and shapes on a wall on the covered school yard: a sign language “Sustainable Favela Network” with the word “Recycling.” 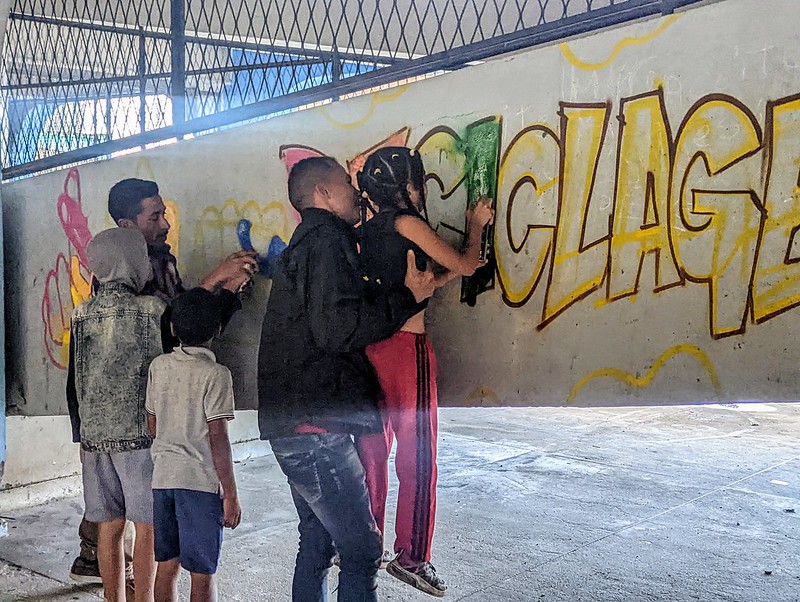 Finally, at the end of the day, Ilaci Oliveira led exchange participants through Vila Cruzeiro, where over 100 Transvida educational booklets launched in the morning were handed out to residents. The group ended up at the headquarters of Lar dos Sonhos, where Oliveira and other volunteers support hundreds of community youth through a number of activities, trying to steer them onto better paths. There, she shared a heartfelt and emotional reflection on the children the organization had helped get to college and who were now working to help their community, and others they had been unable to ensure better outcomes due to the difficult circumstances faced by the surrounding community. In fact, this day had originally been scheduled for early June, only to be postponed due to Vila Cruzeiro having just prior been victimized by the second most deadly police massacre in Rio’s history.

With dusk approaching, the group made its way back to the school, taking with them reflections on how sharing in knowledge, sensibilities and creativity can promote a more just and sustainable path forward.

Video by David Amen. Watch the video of the exchange and activate English subtitles here.