The first major act of resistance by Vila União de Curicica, a community that lies on the path of the TransOlimpica Bus Rapid Transit line, took place on Saturday September 27. Originally marked to receive upgrading and infrastructure through the Morar Carioca favela upgrading program, the neighborhood is now to be removed entirely for the new Olympic transit line that stretches north-south between Deodoro and Barra da Tijuca.

Residents gathered outside the local establishment Bar do Divino at 10am and made their way through the neighborhood eventually arriving at the existing BRT route on Estrada dos Bandeirantes. This made for a peaceful, but stark encounter between protesters and BRT passengers on passing buses, who could be seen through the tinted glass, turning in their seats to observe the demonstration. 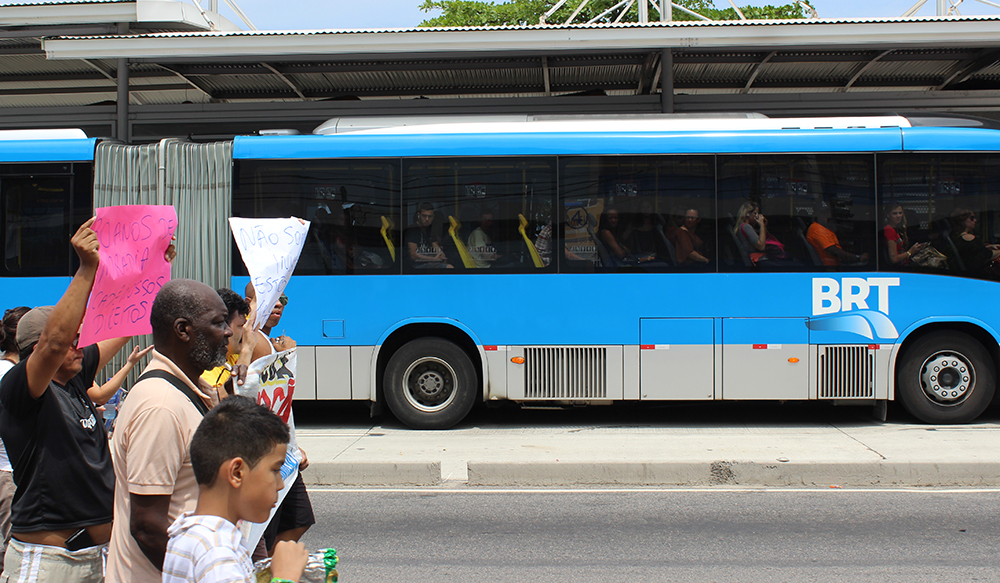 The mobilization of Vila União got off to a late start, in part due to how the community was misled about its future by Mayor Eduardo Paes’ administration, but also due to lack of engagement in questioning removals by the Neighborhood Association, the official body responsible for representing residents. The resistance has thus been organized by a small group of fearless residents who insist they were not consulted and their voices haven’t been heard. Robson, a 37 year old father of two, is one of the leaders and told TV Record: “We are not requesting anything but the law, we are asking for what is just.”

Via a truck-mounted megaphone, those marching encouraged residents to come out and join the demonstration. However, many participants felt the majority of onlookers fear there will be repercussions if they participate in the resistance. Despite evidence to the contrary time and again across the city in recent years, many believe fighting eviction will jeopardize their chance to receive just compensation for their home.

Many of those marching on Saturday have been in Vila União for nearly 30 years, since its founding. Jonas Soares, part of this founding cohort of residents, explained that “from the beginning, the [Neighborhood] Association has not been helping us, it’s been helping the city government to remove everyone.”

Jonas’ sister, Raquel, exemplifies those whose livelihood is distinctly attached to the community: she owns three stores in the area.

“[In public housing] it’s all residential. What will I do with just an apartment and no income from my stores?” she asked. Jorge, a long-time resident of 29 years, typifies those who simply want fair compensation should he be forced out. His current home in Vila União is 150m2, while the apartments in Colônia Juliano Moreira, where residents are to be resettled, are a mere 38m2.

Another resident, Luiza, also living in Vila União for 30 years, explained why participation in the resistance has been limited: “Why don’t the majority of residents come? They don’t come to the protest because they are afraid, because they have heard if they join the protest they will end up without their homes or an apartment–they think they’ll end up in the street. It’s a lack of information,” she concluded.

This sentiment has left many hesitant to speak on record about the situation at all. Just as it does for Raquel, eviction to a new apartment creates new problems for Luiza: “My son is getting married and was going to build his home on top of mine. We can’t do this now because we’re leaving. It changed our plans for the future.”

State Representative Janira Rocha was also present and spoke during the march. She claimed “the number of participants today doesn’t reflect the consensus that exists within a large portion of the community.” Like some residents, she attributed this to a general fear among residents of area militias, which have been an increasingly troubling phenomenon in Rio’s peripheries in the past decade. Militias are often involved with local and state representatives and Rocha pointed out that “the government uses this fear politically, to impede the mobilization of the community” enabling it to carry out projects more easily.

More broadly, people echoed the same accusations heard in Vila Autodromo: that the local government is too closely aligned with real-estate developers and have teamed up to systematically remove favelas from the Jacarepaguá area–essentially using the 2016 Olympics as leverage for a land-grab. In fact, the area is increasingly being referred to and classified as “northern Barra da Tijuca,” the wealthy beachside neighborhood resemblant of Miami that provides much of Mayor Paes’ financial and voting base.