Today, March 8, in celebration of International Women´s Day, we celebrate some of the many warrior women of Vila Autódromo who have been battling against the City for more than five years to save their land, their community, their homes and their families from eviction due to the construction works for the 2016 Rio Olympics.

These women have stepped out of their perceived role as caretakers and nurturers and entered the frontline of a battlefield, as warriors who face what often feels like a never ending war.

Alongside their participation in community activities, such as the production and updating of the Vila Autódromo People´s Plan, an award-winning upgrading project that demonstrates they can live together with the Olympics, a community breakfast hosted to seek greater recognition of their struggle and cultural festivals inviting supporters to celebrate their resistance, the women of Vila Autódromo show individual, unique examples of leadership.

Jane Nascimento has been an important spokeswoman and leader for her community for many years, speaking out not just at community events but also alongside social movements city-wide. In May 2015 she gave testimony to the Human Rights Commission of the Rio de Janeiro State Legislative Assembly (ALERJ).

In August 2015, after a decade-long battle with the City, Jane, a mother, worker and community leader, was forced to leave her home in Vila Autódromo stating: “I will leave my house, but I will not leave the struggle.”

Jane’s reluctant departure was due to a number of painful conditions. She suffered through the violent eviction process and faced psychological pressures, living in rubble and between the torn down homes of her neighbors. Finally, the City’s eminent domain decree targeted her home, among others, leaving her no option.

Her physical removal from the community, however, did not weaken her fight. Since her relocation, Jane has continued to be an active voice for Vila Autódromo’s resistance. She participates in community meetings, protests and has been a community representative for a number of panel discussions on Olympic Rio and housing rights, including at the Museu da República in October 2015 and the Getúlio Vargas Foundation in November 2015.

Jane’s unwavering commitment to her community’s resistance is expressed every time she takes to the microphone. She reaffirmed this once again on February 24 when the community’s Neighborhood Association was demolished: “I will continue fighting, my house fell but my fight has not ended.”

Heloisa Helena, known also by her Candomblé name Luizinha of Naña, lived in her home in Vila Autódromo for 36 years. Built by the Jacarepaguá Lagoon, her home was also a Candomblé spiritual center. In her moving open letter published by RioOnWatch in September 2015 she relays that “the physical construction of a Candomblé house is difficult, mainly because there is much going on, such as having to help people in need of spiritual work and of basic material necessities at the same time.”

Heloisa fought for the negotiation and relocation of her house and spiritual center, suffering with the intensification of existing medical conditions: “For two years, I have not been living, I have been fighting. My body has been taken over by chronic pains as a result of the surgery, eight screws, two plates, lack of treatment due to lack of time or emotional stress.” But she explained that this isn’t even the worst part. Her departure from the community and religious site has left her feeling “empty on the inside, deprived, invaded, violated.”

Despite her medical problems and increasing pressures, Heloisa still fights and strives for justice. In her second letter published by RioOnWatch last month she outlined the terror of receiving death threats. She wrote: “Since my community always gives me strength to speak, a cry for freedom came from me. I told the community that I was being threatened. They gave me strength and I started to fight again.”

Heloisa’s home and spiritual center was demolished by the City on February 24. On March 3, Heloisa shared a video on her Facebook page alongside text that wrote:

“They demolished the house of Naña, but Naña didn’t fall. The physical house of Naña was demolished. We are all traumatized at the moment, with the profound disrespect demonstrated against my social class and my religion. I heard [from City officials at the time of demolition] with suffering–that my house was trash, that the house of Naña was to be trashed. But I am here and I am not leaving until I have a piece of land for Naña. I fight for Vila Autódromo, we are strong and our fight continues. Our voice says upgrade now!“

Sandra Maria is a mother of four children aged between 11 and 20 who has become an active voice and face of Vila Autódromo’s resistance in recent months.

In November last year, Sandra welcomed the Rio Urban Agriculture Network and students from PUC University into Vila Autódromo taking the groups around and educating them in the community’s ongoing battle. She reflected on the community where her four children grew up, where “everyone knew everyone,” where they were “free” and “very safe,” where they have their life story.

Sandra highlighted: “A major part of the community is the women. The women think about everything and everyone. What’s going to happen and what the solutions will be.”

In the past couple of months Sandra Maria has stepped up and become a voice for the community, featuring in a TIME Magazine article and the Popular Committee’s video denouncing Eduardo Paes’ claims against their work.

Last week Vila Autódromo shared a video on their Facebook page in which Sandra reflected on the tense recent weeks in Vila Autódromo. Evidently tired from the ongoing stress, she recounted the government’s more recent psychological pressures and efforts to diminish what remains of the community and thanked all those who support Vila Autódromo in their battle.

Alongside fellow residents and supporters, Sandra affirms that Vila Autódromo will continue to resist. At the recent demolition of the Neighborhood Association she said:

“The history of Vila Autódromo isn´t so easily removed… When these (luxury) buildings that Mr. Carlos Carvalho says he will build are constructed here, we will be here. The image of today, all of these images that have been documented here, including beatings of residents, all this will still exist.” 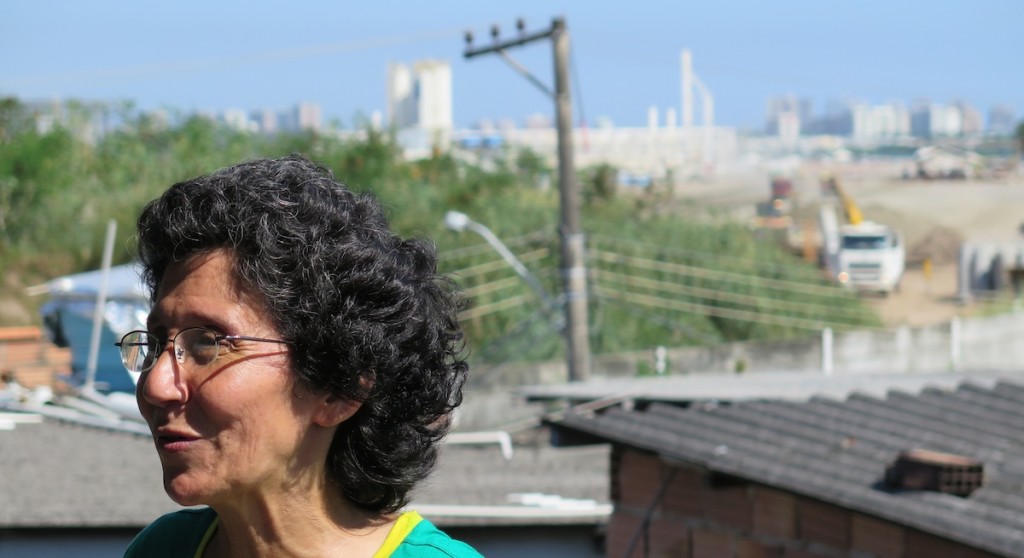 “I will not give up 22 years of history for 15 days of Olympic Games.”

Although her petite frame and humble personality might not show it, Maria da Penha, commonly known just as Penha, is one of Vila Autodromo’s boldest and bravest activists.

On June 3 2015, riot police were sent into Vila Autódromo to forcibly evict residents in a shocking lightning eviction. Police used rubber bullets, pepper spray and batons during a physical attack on residents which left Penha with a broken nose and seriously injured.

Nine months since the injury, Penha fights stronger than ever. Her home is one of the few houses that still remain in Vila Autódromo. The extreme threat of the past two weeks has turned to certain demolition, today in fact. As we click ‘publish’ Penha’s home is circled by Municipal Guards.

On February 21 she welcomed around 30 community supporters into her home to camp out in preparation for an early morning demolition. “I’ll stay on my feet,” she said, paying more attention to her guests’ needs than her own. “Even if the house falls, I will stay on my feet.”

Penha, who has lived in the community for 23 years, insists that no amount of money can compensate her house, her community, her memories: “Your house is not just a house, it’s a story of your life,” she affirms.

Maria da Penha’s daughter Nathalia has recently joined her mother on the frontline of Vila Autódromo’s resistance battle with her bold attitude and strong, persuasive speech, representing a new generation of resistance within Vila Autódromo and beyond.

Nathalia maintains a positive vision for change and the permanence in the community where she was born and raised: “What the community needs… is urban reconstruction and basic infrastructure.” She and her fellow women warriors believe the Mayor must keep his word and upgrade the remaining 50 homes in the community. She envisions a cultural center, a medical center and a nursery for the future community. “These will not only help our community but surrounding communities—it will be of collective benefit.”

Vila Autódromo’s women are not just fighting for just themselves, their family or their community. They are also fighting for all communities that face oppression and eviction around the world. Nathalia affirms:

“I have already seen how similar our story is to what is happening to other communities… Even in other states, other countries, too. There are too many stories of people going through the same pain we are going through here… Our resistance moves them to continue their own resistance.”