On Wednesday May 11, Heloisa Helena Costa Berto, an Afro-Brazilian Candomblé priestess, also known by her Candomblé name Luizinha of Nanã, whose home and spiritual center in Vila Autódromo were demolished to make way for the Olympic Park, received the Dandara Award from the Rio de Janeiro State Assembly. The Dandara Award is named after the colonial era warrior woman who fought alongside her husband Zumbi, the last leader of the historic runaway slave community Palmares. State Deputy Flavio Serafini delivered the award established to recognize the exceptional work of Afro-Brazilian, Latin American and Caribbean women in the State of Rio de Janeiro.

Heloisa’s strong commitment to her Candomblé faith and struggle to save not only her home but the homes of her neighbors in the Vila Autódromo community made her an obvious choice, said Serafini, as he delivered the award, Heloisa Helena being its first recipient. Heloisa Helena had recently received the Pedro Ernesto Medal from the City Council of Rio de Janeiro in recognition of her fight for housing and religious rights.

“Our reality is built by those who work, those who struggle, and those who resist. We had no doubt after following the struggle in Vila Autódromo that Heloisa was a more than deserving recipient for this award,” stated Serafini. He also recognized that Heloisa’s struggles were compounded by the fact that she is “from Vila Autódromo, black, and a Candomblé practioner.”

Many remaining and former residents of Vila Autódromo attended the event, and Serafini also dedicated the award to all those who fought against the real estate speculation and abuses carried out in Vila Autódromo that reproduce centuries of oppressive practices in Brazil. “You all are our heroes, because you build your lives with your own hands and with your own work, without trampling on others and without exploiting others.”

Serafini was joined in honoring Heloisa Helena by Maria da Penha, another female leader from Vila Autódromo, historian Katiuscia Barbosa, and housing public defender and recently appointed Superintendent of National Institute for Colonization and Agrarian Reform (INCRA) for the State of Rio de Janeiro Maria Lúcia de Pontes. The award ceremony was also a celebration of Afro-Brazilian culture, with jongo performances led by the group Sopro de Gaia and singing from the group Awre.

Pontes, who in her role as public defender was often on the front lines of Vila Autódromo’s struggle, was clearly moved by Helena Heloisa’s poise in the face of the psychological pressure that eventually forced her from her home. “I witnessed Heloisa’s fight, which blends with the fight of Vila Autódromo, but there is also a very particular component, that of African ancestry. Afro-descendants who maintain their origins and culture and who have the courage to fight for them suffer much more than others.”

Many of the city’s tactics against Heloisa Helena speak to this particular prejudice. The city encircled her home and Candomblé center along the lagoon within the Olympic construction site, forcing her and her family to seek permission to use an entrance 5km away from her home. When her home was demolished on February 24, the city had received an extension from the courts to demolish her home after 6pm, despite that being the typical cut off, leaving her with little notice to save her pets and gather the remaining religious items in her home. She was also called names and made to wait enormous amounts of time, despite physical pain, during her painfully long negotiations with the city.

“I want to thank you,” Pontes continued, “Even though we didn’t meet in the best moment you’ve taught me so much.”

For historian Katiuscia Barbosa, much of the challenge in combating prejudice and racism in Brazil stems from the “job very well done” by the dominant European, Christian sectors of society throughout history to coerce Afro-Brazilians to reject and disparage their own culture to the point that “the oppressed wants to be the oppressor and wants to occupy the spaces of the oppressor, even though they will never be theirs.” Barbosa cited the current “extermination of black youth,” who comprise 77% of all homicides in Brazil, as evidence of the disregard for blackness in Brazil and the continued “extermination of black culture” since the 15th century.

Education, according to Barbosa, is the essential first step in dismantling Brazilian white supremacy. Heloisa Helena, who graduated from college at the age of 40 and put all four of her children through prestigious public universities, is an example of the power of an education that recognizes Brazil’s rich Afro-descendant history.

Though Afro-Brazilian history and culture has been a mandatory part of the curriculum since 2003, its teaching has been poorly implemented. The law that mandates Afro-Brazilian history and culture be taught in Brazilian schools is like many laws and rights in Brazil, beautiful on paper. This was a theme underscored by Maria da Penha as she shared in congratulating her friend and comrade in Vila Autódromo’s struggle.

While Penha recognized that the deal reached with the city for the remaining 20 families to remain in Vila Autódromo was a partial victory, the psychological trauma the community had to endure, coupled with the near complete fragmentation of the community’s collective bonds, rendered it bittersweet.

“I often say that 23 years of my life have been a nightmare because every year we were threatened to leave that community,” lamented Maria da Penha. “Unfortunately it is very hard. It’s very difficult to lose the tranquility of being in your own home, in your community, in your favela, where you live, a right that everyone has. Rights that many times when mega-events come or when progress comes, our politicians who don’t know how to govern for the people, evict you from your home, your community, from your favela and cut you off from your history.” 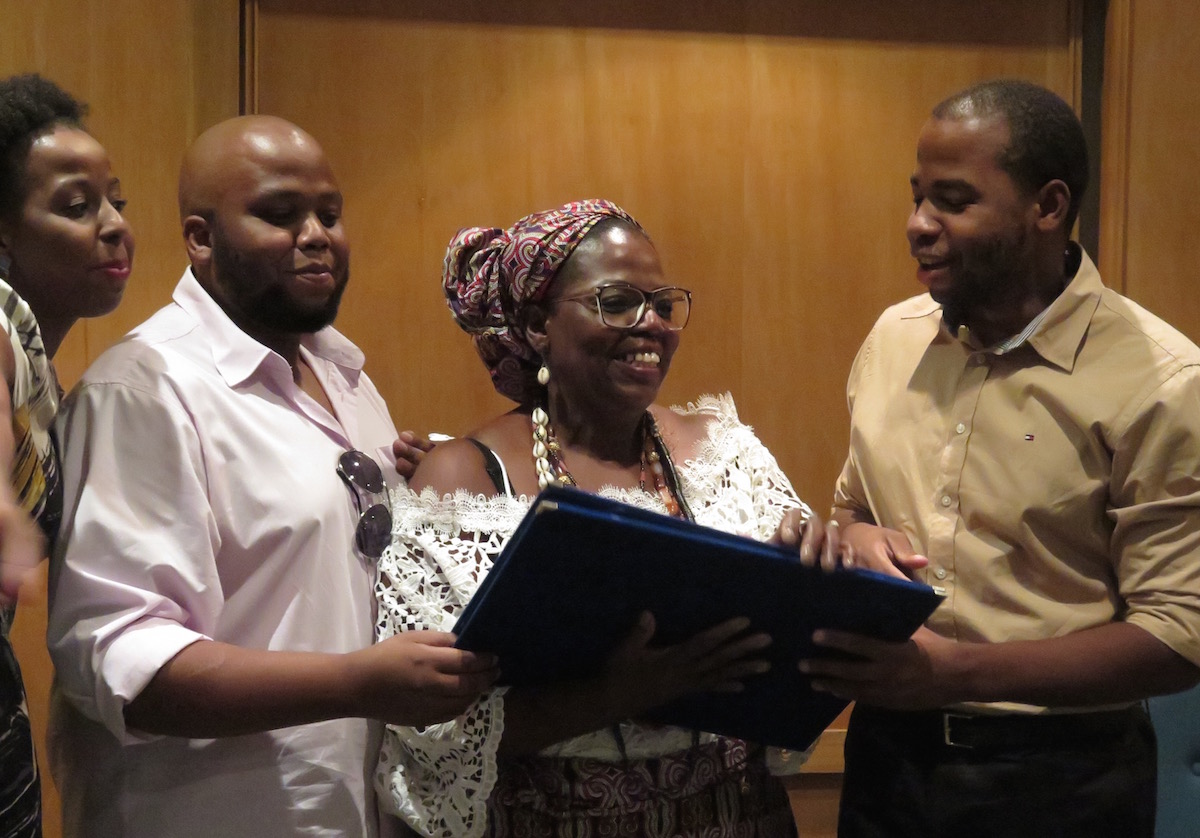 As she accepted the Dandara Award, Heloisa Helena asserted that the award held a significance beyond herself.

“I am immensely happy and moved by the presence of all of you. I know that many have come from far away to attend this moment of victory, which in reality is not just mine, but rather a victory for all of us black people, Candomblé practitioners, and favela residents, or, those who are all three, like myself. This prize represents a recognition of our everyday struggle. Blacks who suffer veiled prejudice daily and are treated as if we exaggerate, as if racial prejudice doesn’t exist in this country. But those who suffer know that yes, it does exist, disguised in pleasantries and hidden through jokes.

It also represents a victory for us practitioners of Candomblé. Even though I wasn’t able to reach my main goal of remaining by the lagoon in the home of my mother [Orisha] Nanã, I consider myself victorious. I was able to reach so many other goals. I see this in the number of people who have joined me in this cause. People of various religions who support me in the right to freely practice my religion and to own the house of my mother Nanã. This true and permanent support that always moves me.”

She went on to thank many people and organizations, including her neighbors in Vila Autódromo and all those who supported her struggle. In the end, however, she signaled out her son Pedro Henrique to share the award with her: “If I am Dandara, Pedro Henrique is Zumbi.”

Heloisa Helena sees the award as just one more step on her journey toward a more inclusive, tolerant Brazil. She hopes to soon open up an educational NGO offering opportunities to other black favela residents and to combat the prejudice that continues to put Afro-Brazilian lives and livelihoods at risk.