For the original article by Raquel Rolnik in Portuguese click here.

Sunday, January 22, 2012, 6:00 am, São José dos Campos (SP). Thousands of men, women, children and elderly residents of the Pinheirinho occupation were surprised by a fence of helicopters, armored cars, and more than 1,800 armed Military Policemen. In addition to blocking off exits of the occupation, water, electricity and telephone lines were cut, and the order was given for families to gather together so the initial process of removal could begin. Determined to resist — since the reinstatement of land rights had been suspended on Friday — the residents did not accept the order, giving start to a dramatically violent situation that lasted the entire day and resulted in families without shelter, injuries, detentions and rumored deaths. 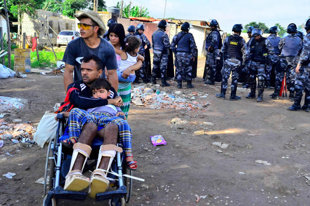 Over the last eight years, residents of the occupation have fought to remain in the area. They sought agreements with government agencies to promote land regularization of the community, counting on the fact that the area has a million dollar property tax debt with City Hall. The land pertains to the bankrupt portion of the business Selecta, whose owner is the financial speculator Naji Nahas, who was already investigated and temporarily arrested by the Federal Police in the Satiagraha operation. Over the weekend, there were various judicial comings and goings, ranging between favoring and opposing reintegration, in addition to dealings among Federal, State, and Local governments and legislators to find a peaceful end to the conflict. With the negotiation process still in progress and contradictory judicial decisions coming forward, the State government decided to arm a war operation to end the matter. 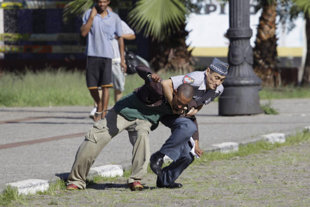 January 3, 2012, Luz region, São Paulo city center. The Military Police start a “cleansing” action in a region City Hall calls Cracolândia (an area overun by crack users and dealers). In 14 days of action, more than 103 drug users and denizens of the region were arrested by the police with the use of mounted police, pepper spray and much brutality. Afterward, more than thirty buildings were sealed off and some demolished. This region is target of a “revitalization” project by São Paulo City Hall, who intends to hand it over “clean” to private enterprise to construct office towers, housing, and a theater for opera and dance in the location. Residents of the closed off rental buildings were intimidated and told to leave the area even though they had nowhere to go. Businessmen who run the largest hub of consumer electronics in Latin America, Santa Efigênia, along with residents who have lived there for decades, have been trying since 2010 to block this project since it completely disregards their demands. 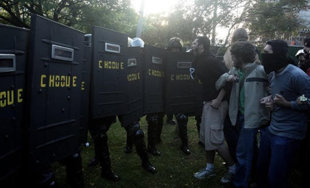 November 8, 2011, 5:10 a.m., University City, São Paulo. A police officer points a gun at a student with arms raised, the SWAT team enters the building, breaking down doors (even though the police are already inside), without letting anyone else enter (not even the press, by the way) nor leave, all with excessive brutality. This was the beginning of the ousting of the occupation of the President’s Office of the University of São Paulo, occupied by students in protest of military police presence on campus. The students were taken by surprise by a fence formed by the SWAT team and mounted police, totaling more than 300 Military Policemen. After hours of violent action, more than 73 students were removed from the building and arrested. An armored tankand helicopters accompanied the action.

What do these three recent regrettable episodes and atrocities have in common?

The three events involve conflicts of management and occupation of territory. The three are complex situations that, to be effectively handled, would demand a combination of policies in the short, medium and long term. The three require enormous mediation and negotiation efforts.

However, what was the answer for this complexity of conflict? Violence, suppression of communication, and intensification of conflict.

Some may say — but why do Pinheirinho occupants resist? Why didn’t they leave immediately, avoiding the injuries of the confrontation?

Because they know that those who have been “ousted” or “forced out” in these and other “cleansings,” were left homeless. In other words, for those who promoted the eviction or the cleansing, what matters is emptying the location, and not the fate of who was there, much less the reasons those people were living there in those conditions in the first place or addressing and resolving these issues. “Resolving” the question is simply a matter of making the “problem” disappear from the landscape.

Even graver still, in these situations the supposed “illegality” (land occupation/drug use) is sufficient reason to promote every and all types of violation of laws and rights in the name of order, in this embarrassing regression of the advances of democracy in the country.