Rio de Janeiro’s Popular Committee on the World Cup and Olympics has been marking the final 100 days before the Rio 2016 Olympics with a social media campaign to highlight 100 rights violations related to the Games. The campaign’s name, #CemDiasSemDireitos, translates to “100 days without rights.”

Beginning on April 27, the Popular Committee posted an example of a rights violation in pre-Olympics Rio each day on Facebook and Twitter. The 51 violations identified so far include the forced removals of whole or parts of communities, broken social and environmental legacy promises, and violence by police against protesters and other civilians. A number of the violations highlight concessions granted to business interests, ranging from the privatization of public land in general to “changes in the law to favor [the company] Cyrela in the Marapendi Reserve,” where the Olympic golf course has been built on a protected environment. Others highlight the City and International Olympic Committee’s apparent disregard for non-elites: spending on Olympic infrastructure as public education funds run dry, the restriction of informal traders’ licenses, the end of the affordable standing sections in the Maracanã stadium. 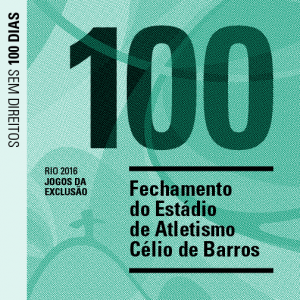 Each Facebook post comes with an explanation of the highlighted issue and why the Popular Committee sees it as a “violation.” The #52 post from Tuesday, for example, was the “rationalization of buses,” referring to the City’s move to cut and alter numerous existing bus lines in an effort to reduce inefficiencies and unnecessary bus traffic. The Popular Committee argues the implemented changes reflected a “corporate logic of increasing the lucrativeness of bus companies” rather than “the real needs of the city’s population.” The result is “[bus] lines that are more fragmented, forcing an increase in the number of transfers that are not totally covered by the Bilhete Único [Single Ticket],” and the “extinction of lines that offered direct links between peripheral neighborhoods and the South Zone beaches, strengthening spacial, financial, and police controls over ‘protected areas’ for tourism and for the city’s affluent classes.” In sum, the Facebook post argues, the result is an “Olympic City [that is] more and more segregated and unequal.”

This latest digestible presentation of human rights violations builds on a number of extensive dossiers the Popular Committee has published ahead of the 2014 World Cup and 2016 Olympics. It represents another critical contribution to a growing body of evidence of the ‘state of exception‘ brought about by sporting mega-events, in which ‘inconveniences’ required by law such as community participation and government transparency get swept aside to deliver a world-class event on time.

Read the Popular Committee’s “100 Days Without Rights” list so far: