“We were a rural quilombo that became an urban quilombo,” Adilson Batista Almeida explains as he describes the Quilombo do Camorim do Maciço da Pedra Branca in Jacarepaguá, an area in the West Zone of Rio de Janeiro close to the Olympic Park.

Almeida is the founder, president and director of the Camorim Cultural Association (ACUCA), a community organization that represents Camorim residents’ claims to collective land titles in order to preserve the territory’s history as a quilombo—historically the communities formed by runaway slaves. Like its neighbor Vila Autódromo, Quilombo do Camorim has been threatened by the real estate speculation in Barra de Tijuca that began in the 1980s and has accelerated in recent years due to the Rio 2016 Olympics. Parts of the territory claimed by Quilombo do Camorim were deforested to make way for recently constructed condominiums that will house international journalists covering the Games.

“Within our history, we have all of this cultural, environmental, and historical knowledge,” Almeida states, detailing the quilombo’s history in front of a turn-of-the-20th-century CEDAE water utility reservoir built by residents within the state park. Faced with the completed condominiums, as well as tensions within the community, Quilombo do Camorim is currently struggling to retain this knowledge and way of life.

Situated near the entrance of the Pedra Branca State Park, part of the world’s largest urban forest and an important site for the conservation of Atlantic Forest biodiversity, and stretching throughout much of what is now Barra de Tijuca, Camorim’s history dates back to the indigenous Tupi-Guarani who inhabited the area prior to the Portuguese colonization of Brazil. The name Camorim comes from a fish that local inhabitants caught in the Jacarepaguá Lagoon. When Salvador Correia de Sá the Elder, cousin of colonial governor Mem de Sá, claimed the area for his plantation and sugar mill, he kept the local indigenous name.

Though the road leading to Quilombo do Camorim is now lined with gated condominiums, one of the lesser-known jewels of colonial architecture in Rio, São Gonçalo do Amarante Chapel welcomes you as you enter the community. Built by enslaved Africans in 1625 and retaining much of its original structure, the white and sky blue chapel is a testament to the continuous cultural production and occupation of the community by Afro-descendants. In 1965 the Cultural Heritage Institute for the state of Rio de Janeiro recognized the chapel as a historic landmark and it was recently restored in 2000. The annex and square next to the church are also important spaces for ACUCA’s cultural—capoeira, jongo, maculele—and environmental activities since the quilombo lacks a community center.

According to Almeida, the territory also boasts important archaeological sites. The original senzala—slave quarters—located near the church still has some of its original structure, though it has been altered significantly by residents over the years. Trails that are now part of the state park retrace the steps of those who fled and resisted slavery. The remnants of their hideouts—small caves, rock formations, and wattle and daub houses—can be found throughout the forest on the way to Pedra do Quilombo, a peak that served as an important lookout for the quilombolas—members of quilombo communities. “They were experts of this forest,” affirms Almeida, and it was this knowledge of their natural surroundings that enabled quilombola resistance in the region.

Almeida and ACUCA continue this history of environmental expertise by offering guided tours of the community and state park. Almeida insists that visitors respect the nature reserve, and he has countless stories of unguided people contaminating the water supply by swimming in the reservoir or would-be bushwackers needing to be rescued by him and other members of the community when they venture off the trails of the over 12,500 hectare park. As stewards of their ancestral lands, ACUCA regularly hosts reforestation and park cleaning events, the most recent of which was on June 5 to commemorate World Environment Day.

Camorim and Almeida are examples of the complexity of the history of slavery, race, and racism within Brazil. Though he strongly laments the fact, Almeida does not hide that he is the descendant of a capitão do mato (forest captain), an often black or mixed-raced man tasked with finding and returning runaway slaves. Almeida’s great-grandfather, Caetano do Camorim, was even mentioned in Magalhães Corrêa’s early 20th century chronicles of then remote Jacarepaguá and Barra, O Sertão Carioca, or “Rio’s Hinterland.” “I don’t like to talk much about this but it is history. Unfortunately, a black man captured his brothers so that they could be whipped. This is part of my history but it’s not my history. Today I struggle to maintain all of our history as a quilombo, all of our Afro-descendant traditions, all of our history alive, retold, and documented.” 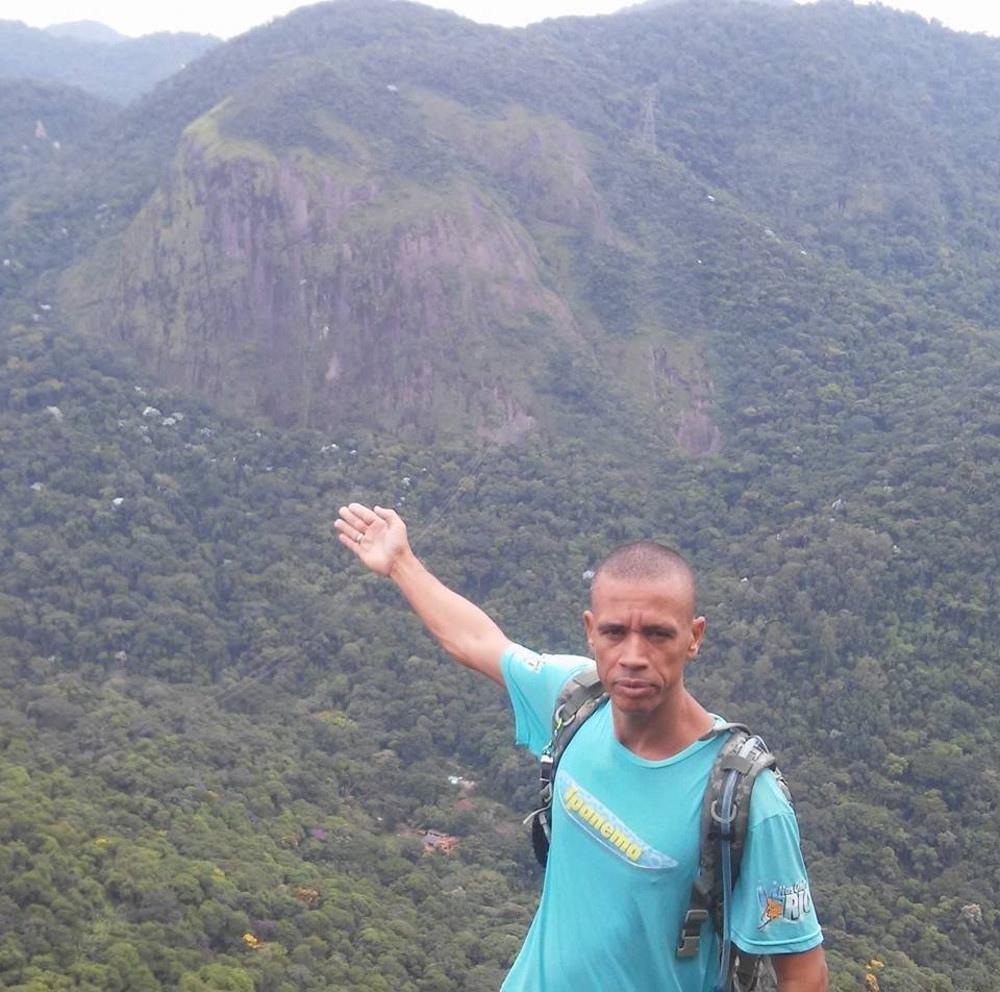 Despite this deep historical, cultural, and environmental connection to the territory—all heavily considered when determining quilombo status—Quilombo do Camorim has yet to be granted collective title to their lands. In 2004 members of Camorim solicited recognition as a quilombo through the National Institute for Settlement and Agrarian Reform (INCRA). “The process with [the federal authority] INCRA has been very difficult. I went to find out information and there wasn’t much orientation,” contends Almeida.

In 2003, a presidential decree divided the process of quilombo recognition into two stages involving two separate government agencies. First, the Palmares Cultural Foundation (FCP) must register and recognize a community’s self-identification as a quilombo. The community then begins a long process with INCRA to officially demarcate both the community and territory through an anthropologist-led technical report that can take anywhere from two to over five years to produce. Once INCRA has checked its registries and approved the demarcated land, the institute begins negotiations to repossess property from private holders who do not identify with the quilombola community.

Though ACUCA first went to INCRA in 2004, they were not made aware that they needed to first register with the FCP given the bureaucratic change and so the case was archived in 2009. ACUCA only received quilombo recognition from the FCP in 2014 and has recently reopened its original 2004 INCRA case, but that means ten years passed before Camorim’s claims were effectively taken up by the government due to lack of accessible information and mismanagement.

Though INCRA had recently made steps to better inform quilombola communities of their rights, ministerial changes under interim President Temer—parts of the quilombo demarcation and titling process were recently reassigned to the Office of the Chief of Staff in partnership with INCRA and changes in the Secretary of Education could affect the already poorly implemented teaching of Afro-Brazilian history and culture—have left many fearful that these gains for Brazil’s Afro-descendants will stall due to a muddled bureaucracy or be reversed due to powerful agricultural lobbies and members of the interim government who actively oppose quilombo territorial rights.

Timing is essential for quilombo communities, which face both external and internal pressure. Shortly after Quilombo do Camorim was recognized by FCP in 2014, Living, a subsidiary of the Cyrela construction group, began building on land claimed by the community. The nearly finished condominiums will house international journalists covering the Rio 2016 Olympics before joining a real estate market that has ushered in a nearly 224% increase in housing prices in the neighborhood according to research by the Observatório das Metrópoles. Almeida admits that trying at this point to reclaim the territory would be a bureaucratic and legal uphill battle. Instead he hopes for Cyrela to recognize the quilombo and, ideally, offer to build a community center for ACUCA’s cultural activities and events, a request that ACUCA made to the city in February of 2014.

In fact, none of the quilombos within the municipality of Rio de Janeiro that have been recognized by the Palmares Cultural Foundation—Quilombo Pedra do Sal in the Port Zone, Quilombo Cafundá Astrogilda also in the Pedra Branca State park near Vargem Grande, and Quilombo Sacopã in Lagoa in the South Zone—have received full collective title to their land. Only about 10% of Brazil’s more than 2,800 recognized quilombos have received full title. Those that have full collective titles are overwhelmingly rural, in part due to a perception that affects both indigenous and Afro-descendant groups that what is traditional is necessarily rural.

Because of their similar struggle for the recognition of their rights, livelihoods, and sense of territorial belonging, Quilombo do Camorim has been particularly supportive of the Vila Autódromo favela’s fight against removals in the face of the construction of the Olympic Park. Members of the capoeira group participated in a cultural occupation of Vila Autódromo in November 2015.

Almeida understands the sense of territorial belonging that many in Vila Autódromo had: “The City removes them, but they want to do it to a place [Parque Carioca, public housing near Camorim] that is totally different from their reality. As a representative of Quilombo do Camorim, for me, they are my brothers. They are in our territory; we should have a union, unite our struggles for the same goals.”

The construction of condominiums in the area is not a recent development. The growth of Jacarepaguá and Barra da Tijuca driven by real estate speculation over the last decades has seen people from outside of the quilombo settling in both the heart of the quilombo around the chapel and in the surrounding areas in gated condominiums.

This growth, however, has brought new social actors like the Evangelical churches that have created divisions within the community. On May 28 and 29, ACUCA held an event inviting university professors, members of the community and members of the Evangelical church—no leaders from the Catholic Church participated despite being invited—to discuss tensions in the community and the possibilities for inter-religious dialogue. Many quilombolas lamented that their neighbors and family members had disassociated themselves from an Afro-Brazilian identity due to the perception that capoeira and Candomblé are “macumba” or “witchcraft.” Heloisa Helena Costa Berto, a Candomblé practitioner whose home and spiritual center in Vila Autódromo were demolished, attended the event and echoed similar sentiments of feeling ostracized in the region for her role as a spiritual leader and advocate for housing and Afro-Brazilian religious rights.

According to Almeida, those who take part in ACUCA cultural activities and events are typically from the nearby condos rather than from the community itself. Almeida estimates that only 20-30 families within the quilombo territory identify as quilombola. Rosilane, Almeida’s daughter, who also serves as the vice-president of ACUCA, recognizes her father’s role as a living encyclopedia for the community: “I need to learn more, he knows everything and it’s important for the community that others learn our history.”

Almeida understands his mission as one of leaving a legacy of Afro-Brazilian historical and cultural resistance for the youth not only of Quilombo do Camorim but of Rio and Brazil:

“We have a [dance] choreography that we named sankofa, [symbolized by] a bird [that looks backwards], so we look backwards to find our origins, learn the good, bring it to the present, and build a better a future… The legacy is for the children, they need to learn about their own origins because they also contributed to the creation of Brazil. Everything that we see here in this forest is tied to a people who really fought to preserve it, they suffered, many died and were whipped, and now we have this cultural and environmental icon.”

Though a cultural center would not restore the territory that the community has already lost, it may serve to preserve the historical, cultural, environmental, and political wealth that Quilombo do Camorim has cultivated for generations.

Stephanie Reist is pursuing both a Masters in Public Policy and a PhD in Latin American Studies at Duke University. Her research looks at center-periphery dynamics, belonging and citizenship, and land rights in Rio’s favelas and quilombos.