Last week a delegation from the Black Lives Matter movement joined with activist groups based in Rio de Janeiro for a series of events under the name “Julho Negro” or “Black July.” During the four-day visit from July 20 to 23, groups met in various locations across the city to discuss a wide range of issues facing black communities in Brazil and the US.

Escalating police brutality in the lead up to the Olympic Games

At the forefront of discussions were concerns over escalating police brutality in the lead up to the Olympic Games.  According to Amnesty International Brazil and the Public Security Institute (ISP), police killings have increased by 135% in the last year. Figures show 75% of those killed by police in the past year were black men.

In the United States, police brutality often involves an unarmed black man being shot by a white male police officer. In Brazil however, the majority of police officers are black and often from favelas themselves. During an event at the Clóvis Monteiro State School in Manguinhos in the North Zone, Rachel Barros, a leader from the Rio de Janeiro Youth Forum, emphasized these differences when speaking to a group of 80 high schoolers and favela residents. She argued that although police officers come from similar backgrounds to the victims of police violence, once they enter the institution their job is to “act on behalf of a racist state.”

Policing violence in favelas is often justified as a response to drug trafficking. Visiting US lawyer and activist Deborah Small, executive director and founder of Break the Chains: Communities of Color and the War on Drugs, said this is not a “war on drugs,” but a war on blacks.

Small went on to contextualize this within Brazil’s history as a country built on slave labor in the sugar, tobacco and coffee industries. “Think about what it means to be the descendants of people who were enslaved in order to promote addiction for profit, who are now being subject to punishment by the same government that built its wealth on addiction for profit,” she said at Saturday’s Joven Negro Vivo (Black Youth Alive) event in Méier. “I don’t know about you but that strikes me as the height of hypocrisy.”

Mental health and trauma in the black community

The impact of state violence on the psychological health of black communities was also discussed during the visit. Research shows that 65% of favela residents fear the police in their communities and the trauma of police violence and operations can have grave negative impacts on residents’ mental and physical health.

“By chance you live in a space, a favela or in the periphery, far from the city center, and that means you have to live with this fear, the insecurity, the risk of imminent death and, on top of that, possible criminalization,” said Bruno Duarte of Amnesty International Brazil.

Trauma permeates the lives of survivors of violence, the families who have lost loved ones, and those who live in the presence of violence on a daily basis. Black Lives Matter activist Waltrina Middleton asked students at the Clovis Monteiro school to show with hands how many of them were accustomed to hearing gunshots. The majority of students raised their hands and said they constantly hear gunshots being fired.

In response, Middleton spoke about the mental harm of hearing everyday violence.“The normalcy of gunshots, living with the gunshots, living with the brutality, is enslavement. It’s trauma. It’s suffering against our souls. It is important for you to break the chains of oppression and to fight back, to be conscious of the statistics that impact your community and to support each other.”

Though many of the activists involved in the meetings had lost loved ones, the pain of losing a child can be too much to bear. On the day of the press release, activists remembered Joselita de Souza, mother of Roberto de Souza Penha, one of the five young men to be shot by Military Police 111 times while in a car in Costa Barros in November last year. Joselita de Souza passed away on July 7 from “sadness.”

“There is ‘orphan,’ there is ‘widow,’ but there is no word for a mother who loses her child,” said Monica Cunha of the Network of Communities and Movements Against Violence.

A further tragedy occurred during the Black July events with the sudden death of poet, activist, and educator Elaine Freitas. Freitas died of a heart attack shortly after experiencing chest pain at the Wednesday demonstration against the continued imprisonment of Rafael Braga, the only person still detained following the 2013 protests.

The delegation’s Thursday afternoon visit to Maré was cancelled following Freitas’ death, however the activists decided to still hold a morning session at the Terreiro Omi Ojú Art, a Candomblé spiritual center in the Miguel Couto neighborhood of Nova Iguaçu in the Baixada Fluminense. 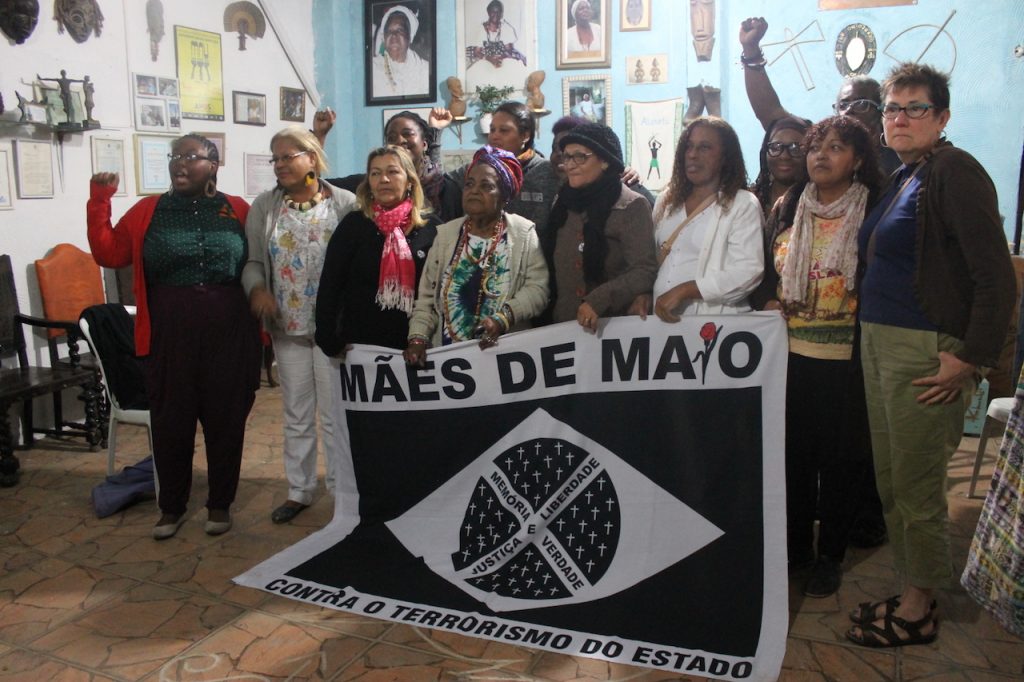 Despite the Baixada Fluminense having some of the highest rates of violence in Rio state, it is rarely covered in local and international media. Luciene Silva, whose son Raphael Silva Couto died in the 2005 massacre in which police killed 30 people in Nova Iguaçu and Queimados, spoke of the intense violence in the region and how that impacts how families mourn: “These deaths that happen in the Baixada, many of them aren’t reported to the police and their bodies aren’t found. Often families can’t even bury [their loved ones].”

Though stigmatized by violence, the Baixada also boasts some of the highest concentrations of sacred Afro-Brazilian religious houses in the state, and Mãe Beata de Iemanjá, spiritual leader at the Omi Ojú Art center, has offered guidance and space to many social movements and activists in the region.

Middleton, who lost her cousin DePayne Middleton-Doctor in last year’s Charleston massacre at the historic Mother Emanuel church, underscored that though many in the room shared trauma and pain, they were also gathered in a sacred diasporic space of healing and black solidarity: “I come today not as a stranger but as your sister connected through the diaspora and very honored to be able to walk on this sacred ground with you. And I thank the ancestors for making it possible for me to be here. And while I did not know our sister Elaine, I feel your pain and I grieve with you, but I also celebrate that she is among the ancestors watching over us.”

One of the most moving moments of shared struggle, pain, healing, and resistance came when Reverend Doctor John L. Selders Jr. of Black Lives Matter led those gathered in song. “I am going to sing, because my spirituality, my religious practice, and my activism is convergent in the music that we share in community.” Despite language barriers, those present sang along to gospel song Speak To My Heart and freedom song Ain’t Gonna Let Nobody Turn Me Around.

Resilience of black women: the strength on the front lines

During the final Black July event hosted in partnership with Amnesty International Brazil, women were brought together to discuss the unique challenges that face black women in Brazil. With black women at the forefront of racial justice movements, panelists argued they should be recognized for both their strength but also the psychological strain of this position. 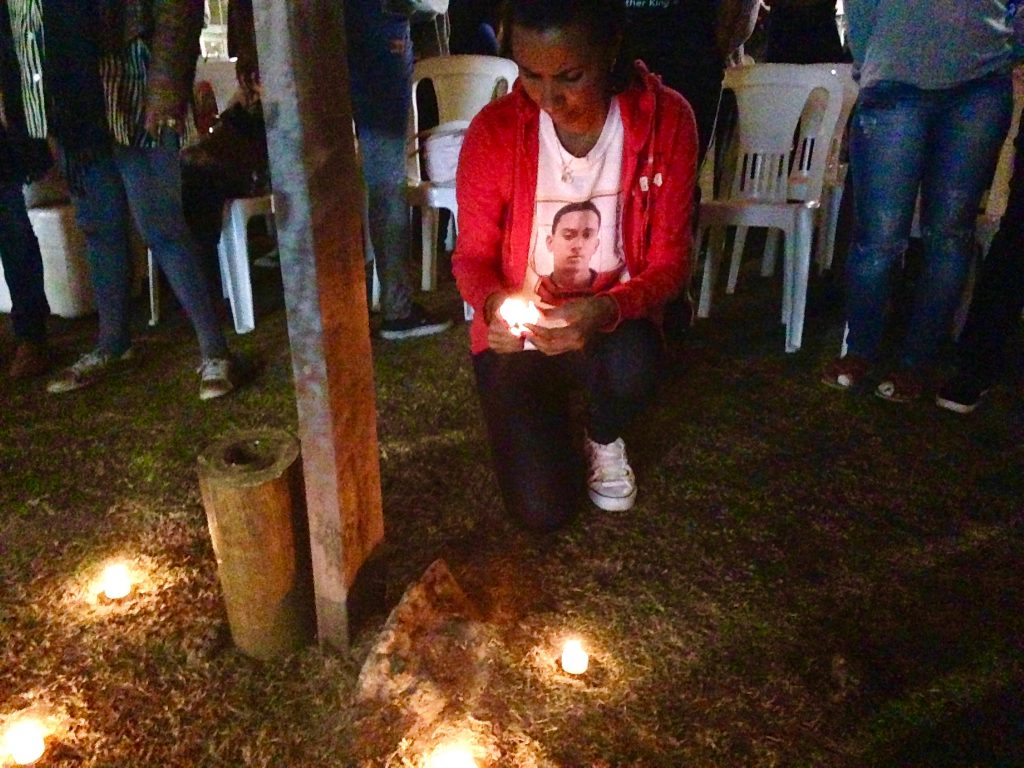 Many panelists emphasized the importance of caring for and supporting black women. “There is this idea of women as just emotional. But not black women. The black woman is strong, she is a fortress,” said educator Nathalia Grilo. “It’s really important to care for and give love to your black sister, your black wife, aunt, mother. Give this woman love because to be strong every day is tiring and it is inhumane.”

Throughout the events, activists noted the irony that Brazil is a country that proudly promotes black culture, but does not embrace black people. “Racism places the black body as a body without value,” said Rachel Barros at Friday’s panel at the Clóvis Monteiro School.

Black activists from both the United States and Brazil emphasized the importance of the media. Activists explained that the media legitimizes police killings when they criminalize the mostly black victims in their reporting, or worse, do not report on these incidents at all. In cases regarding police killings of unarmed black men in the United States, the media tends to either criminalize or discredit the victim, presenting an image of the victim as aggressive, or “no angel.”

Activists urged people to use social media and their cell phones to combat police violence. For example, representatives from the Rio de Janeiro Youth Forum spoke about their application Nós por Nós, which favela residents can use to denounce police violence.

The collaboration between Brazilian and American activists was principally an exchange of narratives, information, and strategies for organizing around the common movement to value black lives in an international context. While the presence of American representatives from Black Lives Matter at the Black July events contributed to the publicity of the discussions, workshops, and activities, the intention is to exchange knowledge and generate collaboration between existing activist networks in the two countries. Organizers announced that plans are already being made for a Black July 2017.