Part of Rise Up & Care’s Reimagine Rio Festival, the film Gira and the Circus of Life (Portuguese title No Risco do Circo no Risco da Vida) directed by Kátia Lund and Lili Fialho tells the story of the Circo Crescer e Viver (Growing and Living Circus) in Praça Onze in central Rio. Founded by old school friends Vinicius and Júnior, the circus is a place of refuge, inspiration and personal development for young people in the local community and from across Rio de Janeiro.

The circus stands in what used to be a half-abandoned parking lot which was used as storage for tow trucks at night and a place of prostitution and drug abuse during the day. The circus moved here after Vinicius and Júnior were evicted from their original location in Nova Iguaçu in the Baixada Fluminense and currently provides training in circus arts for youth aged 7 to 17 as well as formal circus training and regular performances. 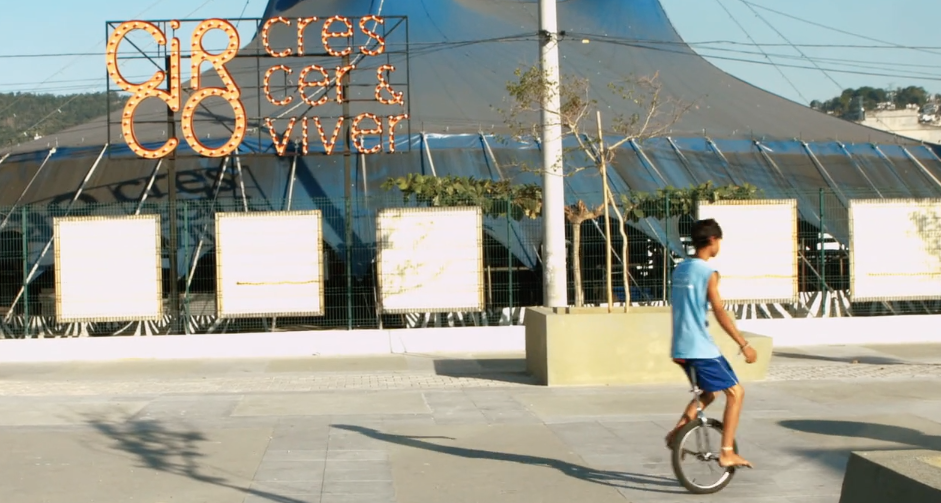 Gira and the Circus of Life brings to the forefront the social importance of the circus and its activities. At the film’s premiere in Praça Onze on August 11, Vinicius, founder of Circo Crescer e Viver, said the film made him “start to understand the dimension of what we do.” Júnior echoed his co-founder’s feelings: “No one quite comprehended the dimension and complexity of the impact we have here.”

Featuring footage of kids doing acrobatic jumps down the street or teaching each other new tricks, the film follows individual stories of some of the students in the lead up to their most anticipated performance, Gira.

Alessandro, also known as Gigante, is 15 years old and has been in the circus for eight years. Francisco, 13 years old, has been there for six years. The pair delivered an impressive acrobatic performance preceding the film premiere. They both love the circus very much, viewing it as a way to grow and learn, and a place to give expression to their artist self.

Djeferson, a man of large stature, defies all stereotypes when he enters the circus world as a trapeze artist. In 2003, after having tried out for the National Circus School and being rejected three years in a row, he sees his dreams disappearing. But with the launch of the circus in Praça Onze in October 2004, his dreams were reignited.

Rayssa has always been fascinated with biology but when she encountered the circus, her focus changed. She was introduced to new sensations and immediately fell in love. A calm and sensitive girl, Rayssa speaks to the camera about the circus as if it were a person, one that has the power to change lives, and that brings her happiness.

Tayane is moved by the opportunities the circus has offered her. Living in Santa Marta, a favela in the South Zone of Rio de Janeiro, she is now completing an internship with PROFAC, the circus’ Program for Circus Artist Training. Rise Up & Care’s filmmakers follow Tayane in her home in Santa Marta and document the emotional moments the circus has brought her.

Letícia has always been part of the circus, until she became pregnant and had to take a break. The support she receives and the celebration that occurs within her circus family at the birth of her child shows that Circo Crescer e Viver is not just an arts school–it is a place that offers a much-needed support network to the lives of these children and young adults.

Speaking at the film premiere, Vinicius thanked the Rise Up & Care team for bringing visibility to the circus and community and making it possible for residents to see their lives from another perspective: “Today, these kids, their mothers and fathers and families, were all inside the circus watching themselves, watching their stories, the stories of their neighbors, in a way that is positive, poetic, human, with dignity, and that gives them value.”