On Sunday June 11, during the Virada Sustentável Rio de Janeiro (Sustainable Turnaround Rio de Janeiro), an introductory workshop on permaculture and composting, organized by Horta Inteligente (Intelligent Garden), was held at the foot of Morro da Providência (located in Rio de Janeiro’s Port Region). The project was borne from a personal concern of founder Elisêngela Cielo, who today lives there but is originally from Bahia, owing to the lack of a positive role model for children about environmental issues and her perceived idleness of children outside of school time. Along with other collaborators like Lorena Portela, an environmental engineer, Elisêngela founded the NGO Horta Inteligente, based in the Instituto Central do Povo (ICP – People’s Central Institute), a Methodist center which has been a source of support for Providência and its young people since 1906.

The Tia Dora Day Care, located at ICP and the focus of Horta Inteligente’s work, cares for children between the ages of two and five. At this age, children are at a crucial stage in development to receive positive stimuli for creative and ecological learning. “The children are so smart, and already know a lot about the garden–enough to teach their friends and family at home. They’re multipliers of the project,” says Elisêngela. In addition to the activities at the center, Horta Inteligente performs clean ups and maintenance work on the green space, participates in public and private events demonstrating permaculture practices while raising funds for the project. Horta Inteligente previously received financial assistance from City Hall but owing to lack of funds this support was stopped.

The aim of the workshop was to bring together all the people who wanted to move away from conventional practices that are harmful to the environment and to encourage them to contribute to the dialogue by sharing their own experiences and knowledge. “It is still difficult to get involved. I want to dedicate myself to it more and make a home garden,” said Marcos, a participant in the event and resident of Providência.

The event was attended by a diverse group in age, ethnicity, personal and professional training who added much value to the debate and experience. Everyone was invited to present a little about themselves and to say how they felt they could contribute to the project and help the environment as well as present any related projects they were participating in in order to increase the network sharing. It was a collaborative exchange that helped participants learn how to better their communities. “I do not believe in politics anymore, we have to do it ourselves, pass the knowledge on, that’s politics! We still lack information and communication but we need to exchange what we can and do good things without worrying about being too old to learn and form a better relationship with our planet,” affirmed Mariana, a geographer who was also the event photographer.

The workshop sought to show that designing spaces to be harmonious with nature is a life philosophy, and that it is necessary to establish systems based on natural patterns in order to create sustainable human communities. Examples of housing built from local, natural and renewable materials often considered as waste or materials of no value were considered. It also reinforced the principle of returning to our origins, observing how indigenous peoples created settlements, and how rural dwellers with scarce resources build homes. Lorena said, “The wattle and daub house works well but is unfortunately associated with underdevelopment, and Chagas disease, when in actual fact–when done properly with the correct and consistent maintenance–it works very well.” 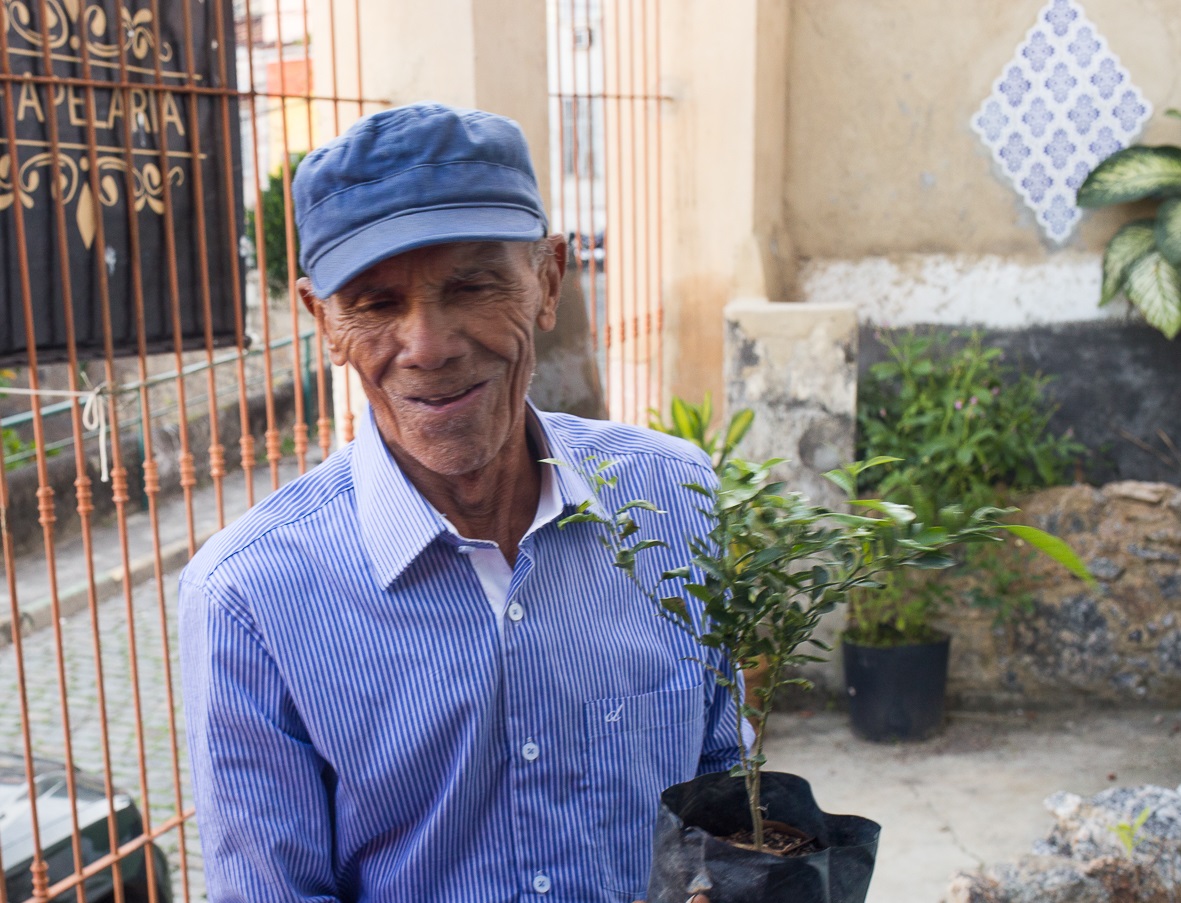 Genaro Martins, resident of Santo Cristo, told participants, “I believe that I’m the oldest person here so I think it’s good to share my experience: I came to Rio from Bahia when I was 23 years old, and until now I’ve never taken any modern medicine. I only ever use natural cures. My family is really large; I have sisters who have had 15 children who are all well. In my building, along with my family, I grow and cultivate over 200 different species of plants, I live off this cultivation.”

The roundtable, integration and debate revolved around the three pillars of permaculture: caring for the environment (soil, forest, water); collaborative economy (the sharing of surplus); and caring for people. “Small farmers are encouraged to cultivate using fertilizers and other toxic products on their land. They spread poison. We’ve already noticed that these agents cause diseases; people are dying out in the fields. We need to reintegrate ourselves with nature, to really understand and know the environment we live in,” added Lorena. The project encouraged participants to purchase seedlings at the headquarters which had been grown by the initiative not only to raise funds but to complement or start their own green space at home.

As a finale to the workshop event, a practical class in composting was held to make participants aware of the socio-environmental importance of separating organic waste and that even if people cannot or do not compost at home by separating their waste when they throw it out they facilitate the work of waste pickers, reducing the need for landfills and garbage dumps. All the organic remains that were used in the class came from the breakfast that had been offered at the headquarters. “We can reuse so much of what we generally consider waste–like bagasse (sugar cane residue), fibre, and fruit seeds to complement our foods. If not, just put it in the food recycling to compost,” said Elisêngela.

A composter can be made from 3.5L buckets like those we get chlorine or margarine in because they’re made of resistant plastic and have good dimensions for this purpose. It’s generally recommended that you stack three buckets for an average-sized family of three to four people. For larger families or communities, it is recommended that specific plastic crates are purchased. Participants learned that any object of natural origin–such as paper, coffee filters, and plant leaves–can be aggregated according to the correct moist residue ratios. When done correctly, the compost will form nutrient rich humus within the space of a few months which can be used on the garden as bio-fertilizer, a free and sustainable practice that can even be done indoors.