On Saturday, July 1, 2017, the Aldeia Maracanã urban indigenous settlement hosted an agroforestry workshop with the organization Popular Education in Cinelândia. About fifteen people gathered to maintain the garden at the occupation. Volunteers added green material to the plot, transplanted donated plants, and literally broke apart concrete to prepare the soil below for planting. Throughout the process, the group learned about inputs to agroforestry systems and medicinal herbs.

Popular Education in Cinelândia was founded as a rejection of the monetization of permaculture and bioconstruction knowledge–classes often cost as much as R$1000 (US$300) and are structured as full-day sessions in remote sites, a condition that removes this knowledge from the everyday urban context where it could be applied, and excludes people unable to invest money and time. Popular Education’s free Friday evening lessons in Cinelândia Square in downtown Rio are offered as an open course and alternative to expensive bioconstruction and permaculture classes. Saturday’s workshop gave the group an opportunity to learn and practice these principles while supporting the efforts of the Aldeia Maracanã. 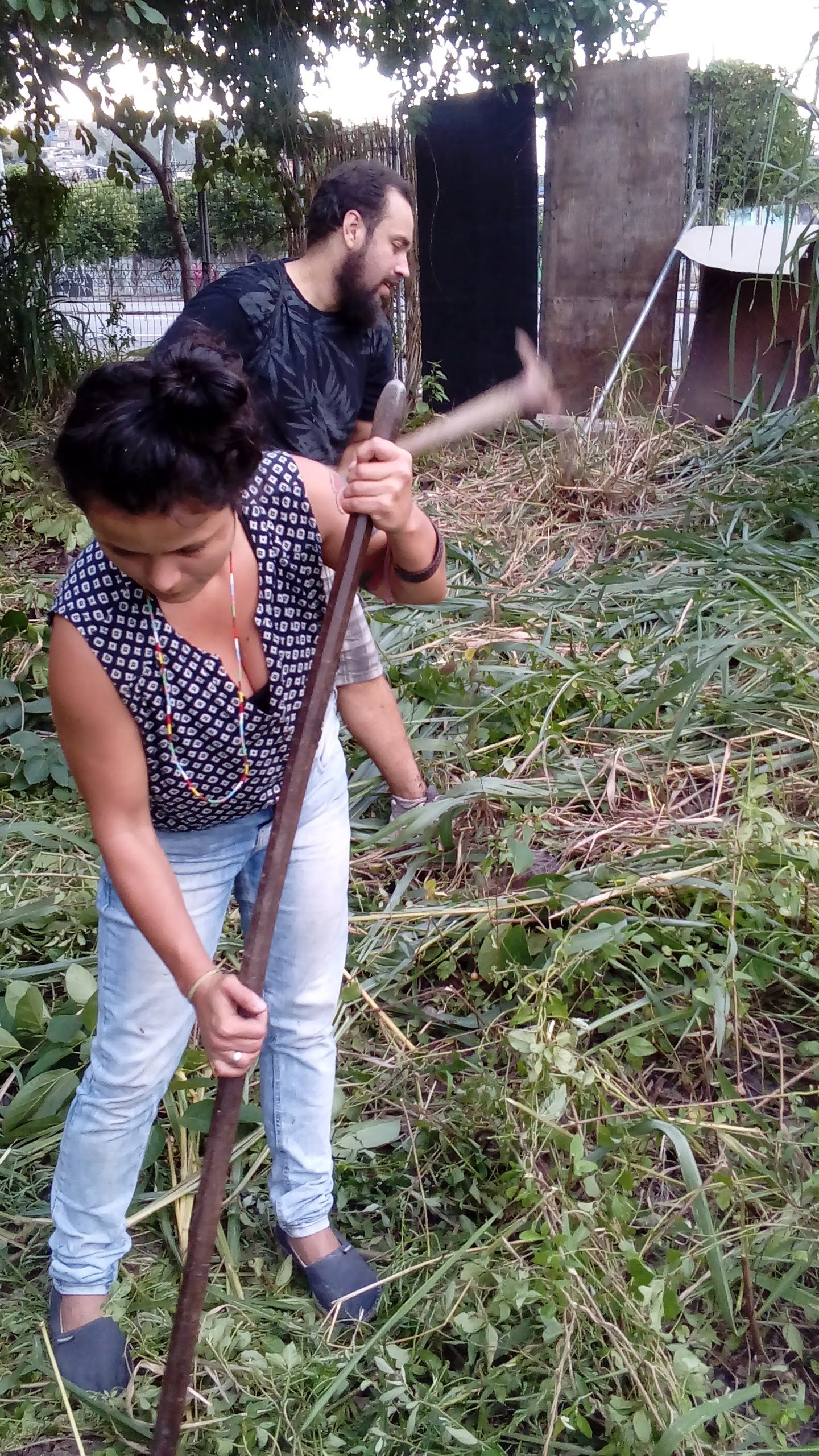 After the collective action, or mutirão, Urutau Guajajara, leader of the Aldeia, linguistics researcher at the Federal University of Rio de Janeiro (UFRJ)’s National Museum, and professor of linguistics at the technical school FAETEC-ISERJ, spoke about the land’s history and occupation. Once the site of the Indigenous Museum founded by Darcy Ribeiro in 1953, the plot was abandoned in the 1970s, then used by the Agriculture Institute to store seeds and conduct research, and finally reoccupied in 2006 by indigenous resistance. The occupation was removed by the State of Rio in 2013 in the lead up to the World Cup, many of the families being relocated to public housing as part of the Minha Casa Minha Vida public housing program. The Aldeia was reoccupied yet again in 2016 by families living at the site and a few garden plots reclaiming the parking lot. The building itself is in need of maintenance–the city had promised to restore the building but soon after scheduled it for demolition.

Guajajara criticized the “Xinguan” perception of indigenous people–the belief that they only live in rural settlements, only speak indigenous languages, and cannot be considered in a contemporary or urban context. He emphasized that it is imperative for the government to see the indigenous community as it is, with its multiplicity of experiences. Until then, policy and conversation will remain unequal and prejudiced. About the injustice of the state’s attempts to expel the occupation of the Aldeia, Guajajara explains, “it’s cruel to know that the only space we have is here,” especially since “the issue here is cultural. And everything that is done here within [the Aldeia] is with respect to the cultural issue.”

The resistance movement has hopes to one day create an Indigenous University at the site, devoted to the study of language and culture, with agriculture being another form of learning and conservation of indigenous culture. Guajajara explains that “being an Indigenous University, other projects fall within its [purview]: a Cultural Center, Points of Culture, and projects with various ethnicities and indigenous peoples.” However, if a Cultural Center alone is created, there would not be the opportunity for as many programs and functions as a university structure would allow, one that is “planned and created by indigenous people, who would be its graduates.”

Guajajara explained that the Aldeia’s location and context makes it ideal for agricultural activities. With its proximity to four universities, history with the Ministry of Agriculture, and because “various courses [are] returning to the question of family agriculture, urban agriculture, agroecology. Because of this, the space is an ideal location,” Guajajara explains.

Following the discussion, leaders of the Popular Education project held a conversation circle on the topic of agrotoxins and chemicals used in farming. The talk related the issue both to the benefits of growing organically at home, as well as the topics of workers’ rights and health, pollution, and destruction of wildlife. After this, as night fell, Guajajara led the group on a tour of the old Indigenous Museum building. Cellphone lights bounced off the walls, illuminating protest murals, poems, and other images of resistance. To conclude, the Aldeia Maracanã community hosted workshop attendees at a bonfire with traditional music of both Guarani and indigenous Peruvian traditions.