Last Monday, July 31, the Institute of Alternative Policies for the Southern Cone (PACS Institute) launched their latest publication, “Post-Olympic Rio: The legacy of the Games one year later” at Casa Pública, Botafogo. Reflecting on the aftermath of the Games, the report illuminates the mismatch between their promised benefits and the everyday reality experienced by city residents. PACS invited speakers from Horto, Complexo da Maré, Vila Autódromo and Maracanã to share their stories of community resistance and defiance. The event highlighted how development strategies for the mega-event specifically targeted Rio’s favelas through increased police interventions by the UPP, ongoing incidents of forced evictions of favelas, market exclusion and public neglect. Following the core tenets of the publication, the event focused on two questions: What legacy has been left? For whom has it been beneficial?

The first speaker, Sandra Quintela, coordinator of PACS’s civil society platform, explained that the Olympics have forsaken a mosaic of unfinished social projects and interventions, as well as a financially and socially indebted Rio. Reaffirming the argument of a growing anti-Olympic movement Sandra underlined how mega-events often impose structural violence on the poorer segments of society: “We know that the Olympics is a private initiative, an initiative that disregards the city and favors the big economic groups so they can use Rio as a showcase for their products.” She continued: “This publication mainly serves to enable researchers and ‘fighters’ to deepen the cause of their research and struggle. We want to create acknowledgement through this struggle, specifically in this dramatic moment of the state of Rio de Janeiro.”

Maria da Penha spoke on the panel as a leader in the resident movement against forced evictions in Vila Autódromo. Vila Autódromo is one of the many favelas that was scheduled for removal in the lead up to the Games. It gained international attention in its fight against eviction. Penha explains that one year after the Olympics, Vila Autódromo is still facing many hardships, but that memory and remembering hold a special power: “memories are quickly lost, but this cannot [be allowed to] happen. This is why today’s gathering is so important. We are living sad memories, but memories that strengthen us.”

Emilia Maria de Souza, a resident of Horto and representative of the Horto Museum and Horto Residents’ Association, elaborated on this thread by explaining the ongoing struggle against eviction. Horto is an eco-oriented community that due to its location behind the Botanical Gardens and near the Tijuca National Park, has been targeted with eviction. While Horto’s history dates back 200 years, the recent upsurge in real estate speculation in the lead up to the Olympics mounted pressure to remove the community. The Horto Residents’ Association rejects the double standards the municipality, state and federal governments use to justify the relocation of favelas around the Tijuca National Park, while ignoring the wealthy villas and mansions built higher up the same hills. Emilia explained how they strategized their resistance according to the same legal discourse of environmental conservation in the Organic Municipal Law, by delivering a proposal to the government on the solution to this question of land ownership: “We proposed the removal of all networks from within the area of the Tijuca zone, all mansions, public and private companies that are within that perimeter. Then, let us talk about a proposal for re-alignment with the community.”

Edneida Freire, former athlete and physical educator, was coordinator of sport programs at the Célio do Barros Stadium, which was closed on January 9, 2013 and later on demolished to make way for the Maracanã complex. Many children and adults from neighboring communities participated in social and physical education programs. At first expecting to receive benefits from the proximity to the reformed Maracanã stadium, Edneida expressed: “We always had the hope they would spare a piece of cake, that they would improve the bathrooms and bleachers. Nothing happened and without prior warning the stadium was closed.” They were not allowed to enter the premises for six months, while the sports complex was not being used by anyone. While promised they would return to the complex, to this day Edneida can only say “malicious” things about the Olympics: “How can a stadium, said to be mythical, not even have one athletic initiation program. We cannot enter Maracanã. Only by paying, but who lives in the community needs free physical education.”

Surely the most heavily perceived legacy the Games left behind is the increased militarization of police forces and their operations in Rio’s favelas. Although state violence in favelas is not a new phenomenon and has many root causes, the incidents of violent police interventions have significantly increased in the run-up to and since the Olympics. Gizele Martins, well-known community journalist and resident from Maré, summed-up a timeline of shocking incidents associated with state violence and public neglect demonstrating the devastating impact of the mega-events like the Confederations Cup, World Cup and the Olympics that dominated Rio’s public policy for a decade. 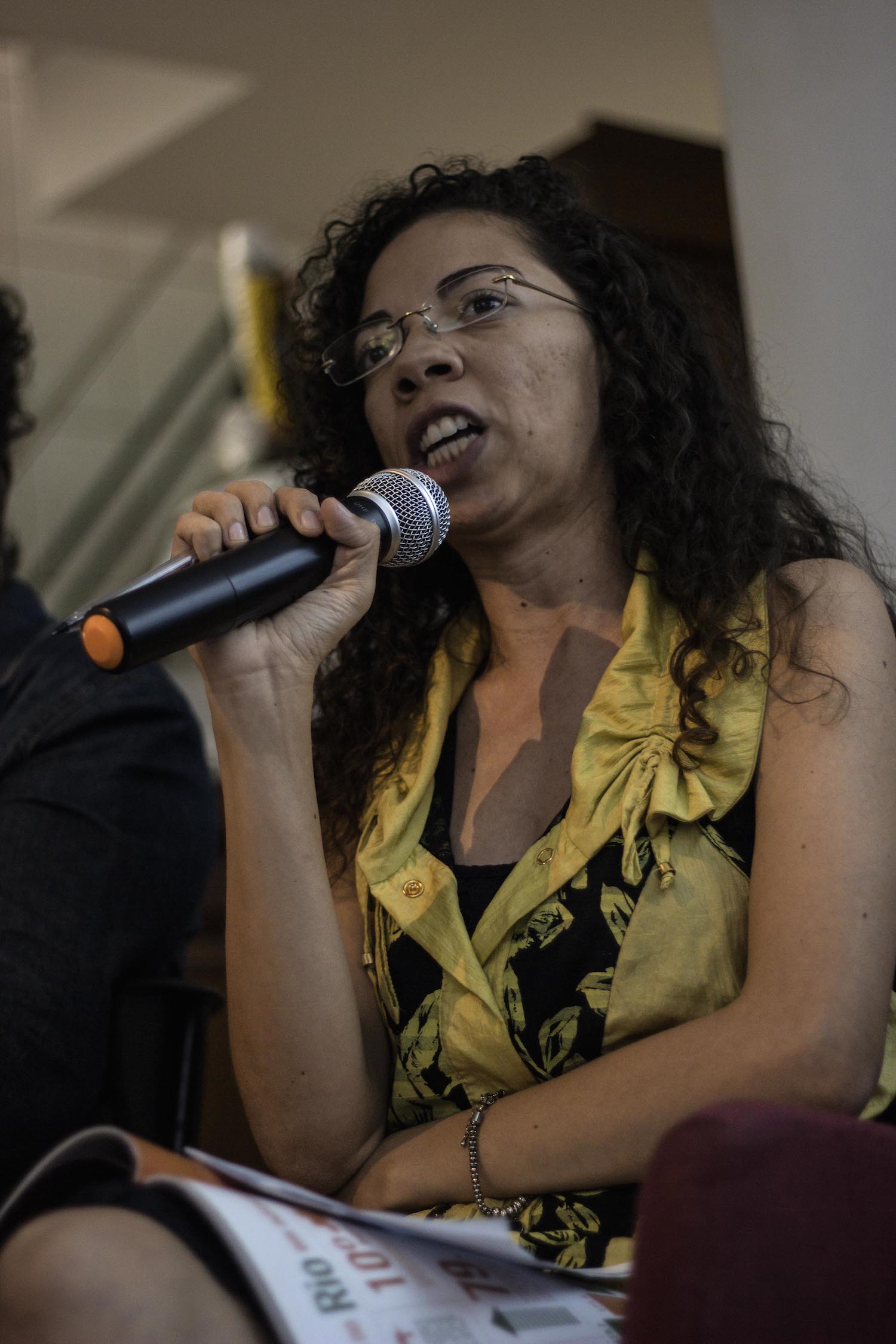 Starting her story in 2007, Gizele reminded the audience of the segregative politics behind the urban renewal projects of these mega-events. The construction of what she calls the wall of shame along the Red Highway, an important North-South road that extends from Rio’s International Airport to the South Zone beach neighborhoods, is an example of this: “It separates the Red Highway and the Maré favela. Why: Because it’s the principal gateway to enter and leave Rio.” She continues: “The buses we had to circulate the city to work in the South Zone were cut during the Olympics.”

During the year of the Olympics, Gizele explains, the exclusionary politics reached a new level through increased militarization by police forces in Maré: “The discourse is that we are enemies of the state. Who lives in the favelas, we, favela residents, are not considered to be part of the city. Because if we would be considered as part of the city, Maré wouldn’t have received a tank during the World Cup.”

One year after Rio’s “shining moment,” the city’s inequality continuous to grow during the current state of political and economic demise. The huge state deficits as a result of public investment in the mega-construction of the Olympic parks and infrastructure projects like the BRT have not brought promised opportunities to the city. For example in Ramos, where the construction of the Olympic BRT infrastructure resulted in a significant loss of green and public space. UPPs in favelas are today more associated with state terrorism than public security, causing more deaths of innocents than saving lives. After all, it appears that dilapidating Olympic sites are more valued than important historic communities like Aldeia Maracanã, Vila Autódromo, Maré, Horto and many others that have been and still are being disregarded and excluded from their rights to land and a safe environment.

Yet, the legacy of the Olympics is not all about pain, injustice and exclusion. Through these struggle and those who continue sharing their stories, as highlighted by all speakers at the PACS event, the Olympics left behind a memory and know-how of resistance. This memory is utilized to strengthen resistance in other communities, is seen though a rapidly growing trend in social museology across Rio’s favelas, and continues to inspire far-reaching coverage, including cinematographic depictions of the consequences of the Games such as in the just-released Favela Olímpica documentary.