As of 2015, the City of Rio’s own data showed that 22,059 families (an estimated 77,000 individuals) across the city had been evicted from their homes since 2009, whether in the name of environmental protection, moving people out of ‘areas of risk,’ urban upgrades and transportation infrastructure, or mega-event construction. Although exact figures are hard to come by, we know that number has increased since 2015.

Across eight years of covering evictions in Rio, RioOnWatch has documented a range of tactics employed by authorities to split up communities and push residents to leave their homes. This article compiles and analyzes four tactics that have stood out for appearing time and time again: 1) misinformation, 2) canceled services, 3) ‘divide and conquer,’ and 4) the ‘Trojan horse.’

In this article, we feature a couple of cases illustrating each tactic, but it is important to keep in mind that each has been used in countless communities. The article also details how communities have resisted each government tactic, offering a point of reference for people suffering from eviction threats today.

Examples of misinformation in Rio evictions have included false promises to remain, sustained threats of removal without execution, misleading negotiation processes, promises of debt-free or better outcomes in public housing which are later seen to be empty or even inaccurate, and changing explanations for why a given eviction is necessary, among others. What the diverse cases have in common is the creation of a climate of uncertainty for residents, who experience psychological stress as their state of vulnerability is often drawn out over months and years.

Perhaps the most infamous case of misinformation is former mayor Eduardo Paes’ administration’s treatment of Vila Autódromo, next to the Olympic Park in the West Zone. In August 2013, after early resistance from residents showed they would not be forced out easily, Paes made a public commitment that those who wanted to stay could stay. Yet in the months that followed, city officials visited Vila Autódromo and repeatedly tried to convince people to leave, implying that the whole community would ultimately be removed and that residents would be able to strike a better deal earlier rather than later. As one resident told RioOnWatch in 2016, “They give false statements saying that everyone has already negotiated with the city, which is a lie.” Residents were also told they would immediately be able to sell the public housing apartments received as compensation, only to find out later this was not the case at all. A number of other communities experienced this type of misinformation about public housing too. Families removed from Rua Ipady, São Sebastião and Vila União de Curicica were told they were getting a “key for a key”—apartments in exchange for their demolished homes—but the City never gave them copies of the paperwork and the families found themselves having to dispute charges for the apartments.

110 former Vila Autódromo families who accepted Minha Casa Minha Vida apartments have since gone to court to argue their negotiation process was not fair. Throughout the whole evictions process, a strong resistance movement mobilized against misinformation by working with public defenders and academics to obtain accurate legal information, keep community members informed, and debunk government claims that the community had to go by developing a People’s Plan for how the community and Olympic Park could co-exist. Residents also attracted significant local and international media attention, which enabled them to publicly challenge the City’s narrative that nearly everyone wanted to leave.

Residents of Horto, a more than 200-year-old community located next to the Botanical Gardens in Rio’s South Zone, have been struggling against eviction in a drawn out conflict with the Botanical Gardens Research Institute. In recent years, individual families have received eviction notices stating that shock troops could arrive to demolish their homes at any moment without any offer of compensation. In late 2016 a court granted the Botanical Gardens 90 days in which to remove the entire community. But with the majority of these notices, no eviction has taken place (with one notable exception). Organizers see the repeated threats as a method to put their neighbors under stress to lead them to leave. There has also been a dearth of official communication about the removal plans. At times, information regarding evictions has come through the police and the media rather than the Botanical Gardens or public officials.

In Horto’s case, misinformation is also directed outwards, with newspaper O Globo, whose headquarters is in the neighborhood and that has direct links to the management of the Botanical Gardens, spreading misinformation of Horto residents as “invaders,” despite the community’s history dating back to the early 1800s.

Horto residents are experienced with resistance after decades of struggle, and have taken action against the removal threats. About 200 families filed lawsuits against the Botanical Gardens, with lawyers representing their case in Brasília since the land is under federal domain. Organized by the Residents’ Commission, the Horto resistance movement has engaged both residents and outside supporters in numerous demonstrations through which it asserts residents’ right to remain and spreads a message of unity. They have also developed and maintained the Horto Museum, documenting the community’s long history alongside the Botanical Gardens as a public contestation of O Globo‘s narrative.

Canceling public services in a neighborhood targeted for eviction is a common method employed by the City to pressure residents to move out, with consequences for the mental and physical health of residents.

After it was decided that more space was needed around the Maracanã Stadium ahead of the 2014 World Cup, allegedly for a parking lot, nearby Favela do Metrô suffered from multiple waves of demolitions that left parts of the community in ruin. Once some residents were removed, the City left half-demolished homes that were then occupied by homeless drug addicts, and large lots of rubble that attracted dengue-carrying mosquitoes and rats. The City also ceased to provide basic services such as garbage collection, making life for remaining residents tough to bear. 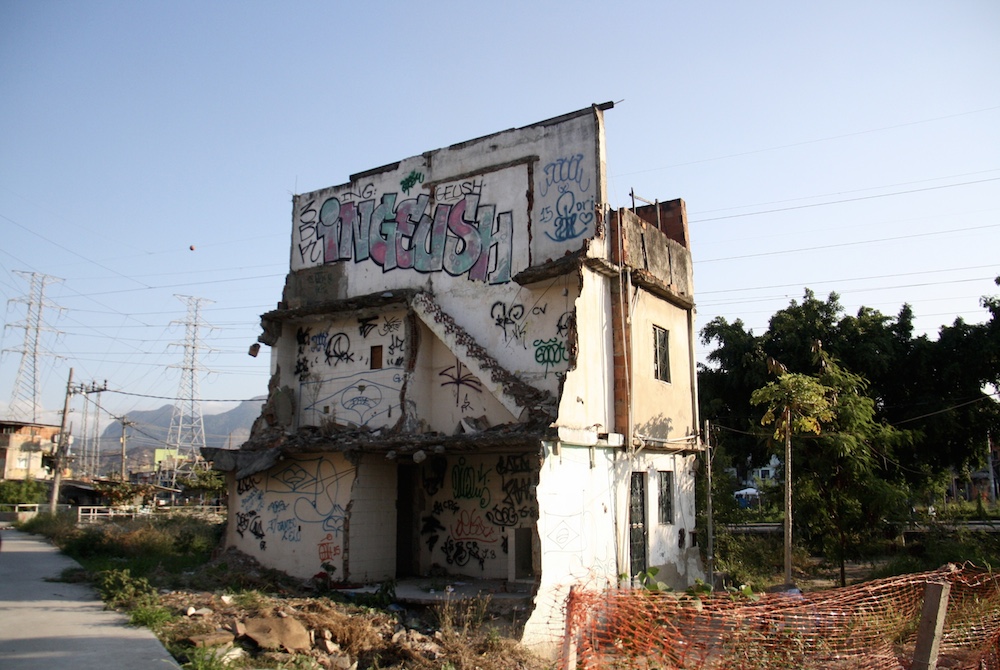 Events in Beira Rio, Manguinhos, in the North Zone, followed a similar pattern. The favela has been partially demolished since evictions began in 2009, theoretically to clear way for Growth Acceleration Program (PAC) projects to benefit the community. As demolitions were carried out, electricity and water supplies were cut without warning for neighboring houses. Residents who resisted had to live among trash and rubble, and without street lighting and garbage collection, for years. As of 2016, seven years after evictions began in Beira Rio, over 1000 houses had been removed and resident Vanderson José Martins Guimarães reported that the government continued to cut off electricity or water for days at a time, in what he saw as an ongoing effort to pressure the just ten remaining families to leave.

Through “divide and conquer” tactics, authorities seek to divide residents of a community in order to make removals more feasible. In many cases in Rio, the City negotiated with individual families rather than allowing the community to negotiate collectively. This enabled officials to get away with offering lower compensation offers or using misleading information to pressure families to accept. Families feared their neighbors were negotiating and they would be left with worse outcomes if they did not do so as well. In some cases, the City raised the compensation offer until a family accepted, but in other cases, like in Largo do Tanque, it gradually reduced offers over time, pressuring residents to accept offers quickly. Some families in Tanque were told they should accept the initial offer without complaint or lose everything. They were also told that if they talked to lawyers they would get nothing, thus creating a fear that would maintain them misinformed. Across many different communities, once a family negotiated they were usually quickly removed and their house demolished, creating a sense of blight in the neighborhood and weakening their neighbors’ ability and resolve to resist.

In the wake of the heavy rainfalls that struck Rio in 2010, experts from the local government argued that Estradinha, in Tabajaras in the South Zone, was located in a landslide risk zone and needed to be removed. Worried by the government’s assessment, most residents agreed to sell their homes to the government, in spite of the irregular and unregulated negotiation process. 250 out of 350 homes were demolished and the remaining residents were left with the rubble.

To resist, the remaining residents partnered with an independent group of lawyers, architects, engineers, and students, who carried out their own assessment showing no risk of landslides and therefore no technical or legal reason for evictions. Independent engineer Mauricio Campos did a stricter assessment than that conducted by the government, and concluded that many of the homes were not actually at risk and containment was a cheaper alternative in cases where risk exists. In 2013, when the mayor tried to negotiate the rest of the community’s relocation to public housing in the North Zone, residents remained united and none accepted the relocation offer. As leader Irmã Fatima emphasized, sticking together was essential to counter the ‘divide and conquer’ tactics, since “as long as one house is at risk of removal, the entire community is at risk.”

In other cases, residents have suspected the City has deliberately created animosity among neighbors. In 2014 many Vila União de Curicica residents were relieved when the City announced a new route for the TransOlímpica BRT lanes that would reduce the number of families it would move from 881 to 191. However, the new plan meant that those who wanted and had accepted public housing offers no longer qualified for resettlement. The changes raised tensions within the community, and some questioned whether the real purpose of the route change was to neutralize the thus far successful resistance movement. More explicitly in Vila Autódromo, City officials falsely told some residents who wanted to leave that delays in their resettlement process were due to a court injunction brought about by the resistance movement, framing their neighbors as their adversaries.

The Trojan horse tactic refers to cases in which authorities publicly announce the cancelation or reduction of previously planned evictions when they actually still hope to go ahead with them, albeit via a revised process. Leaders of targeted communities grew to suspect such public announcements as an attempt to defuse the resistance movement. The aforementioned announcement about a reduction in evictions in Vila União de Curicica is one example, while Mayor Eduardo Paes’ claim about Vila Autódromo—that everyone who wanted to stay could stay—is another.

In October 2017, in the West Zone favela of Rio das Pedras, a representative of new Mayor Marcelo Crivella promised the crowd that “there [would] be no evictions,” announcing a departure from the City’s Strategic Plan proposal to remove and rehouse a large section of the community in high-rise apartments in the area. However, the City’s new project called for construction work on existing buildings’ foundations—which residents feared would actually destabilize houses—and a Bus Rapid Transit (BRT) line through the neighborhood, which residents knew had been used as a justification for evictions in communities around the city.

In each case of a suspected (or confirmed) Trojan horse tactic, the key element of resistance has been for leaders to keep their neighbors aware of the ongoing risk and to continue organizing. The Rio das Pedras commission is certain of its ability to stand strong against the authorities. It has organized events to inform residents about the dangers of the City’s new plan and uses a Facebook group with over 24,000 members to reinforce that message, share updates and commentary, and keep residents actively engaged in local issues. The optimism stems from a confidence that the movement is fighting on the right side—as commission organizer Andrea Ferreira said: “We are able to mobilize because our arguments are really strong… When you work with the truth, everything is easier. You don’t need to lie, you don’t need to deceive.”