Two months into the (at least) ten-month federal military intervention in Rio de Janeiro, the Intervention Observatory held an event on April 26 to present its first report and launch its new site. The Observatory is one of several new civil society initiatives formed in order to monitor, critique, or advocate change in the context of the intervention. The group’s report, coordinated by Silvia Ramos of the Center for Security and Citizenship Studies (CESeC), consolidated new data surrounding the intervention and consequently provides a platform for constructive debate with the federal government.

Ramos opened the event by presenting a graph tracking homicide rates in Rio de Janeiro and nationally over the past 35 years. She stressed that although Rio’s rates are down compared to the 1990s, the intervention decreed on February 16 represents the same old model of public security based on violent confrontation that has failed to make long-lasting positive impacts in reducing violence in the city, as demonstrated by the recent uptick in homicide rates since 2014. Such statistics, Ramos argued, are reflective of the futility and inefficiency of the model and how it has created “new problems” instead of much needed solutions.

In collaboration with the shooting monitoring app Fogo Cruzado, the Brazilian Forum on Public Safety (FBSP), and the Public Security Institute (ISP), the Intervention Observatory produced an Intervention Map displaying the 70 police or military operations that the team monitored over the last two months. The map shows the distribution of operations across the municipality, with the highest numbers of operations taking place in Vila Kennedy (7) and Bangu (6) in the West Zone and Rocinha (6) in the South Zone. In the months of February and March a total of 940 people were killed, with 209 (22%) killed by police and 19 (2%) police officers killed, according to the ISP’s data. The report also highlighted that fewer shootings were recorded by Fogo Cruzado in the two months prior to the intervention (1,299) than during the first two months of intervention (1,502). This increase reinforced the title of the Observatory’s report: “Adrift—No Plan, No Results, No Direction.” Ramos underscored how those in charge “still have not disclosed what will be spent”, their “aims” or their “plans.” 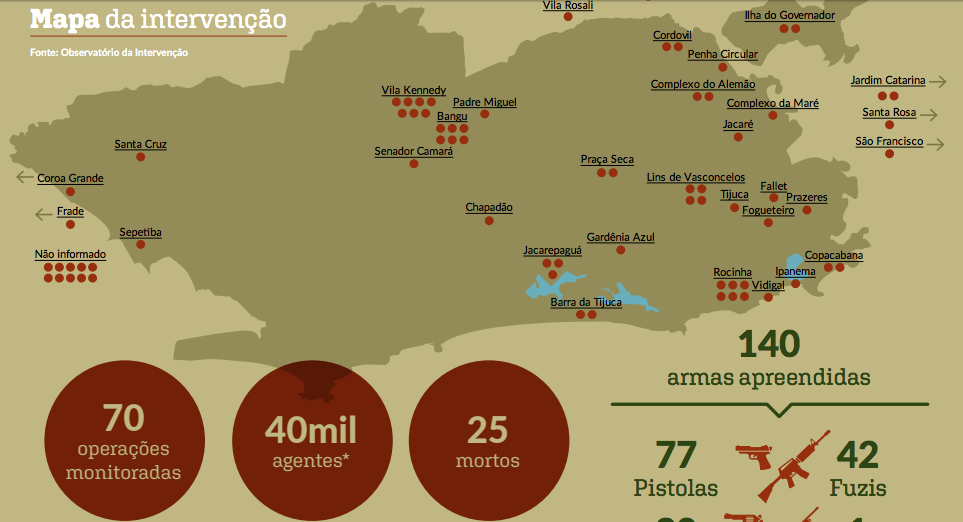 Ramos highlighted that among those killed in the aforementioned shootings were eight young men in Rocinha, in revenge for the killing of one police officer there three days before. Such stories contribute to a deteriorating sense of public security; according to data from the FBSP, 92% of Rio residents are scared of being hit by a stray bullet and the same percentage fears getting caught up in a shootout between officers and gangs. Ramos explained that authorities can use the “fear of the population” to justify an ineffective policy that brings further violence and controversy. She called for more targeted investments in places with the worst security indicators, like the Baixada Fluminense and São Gonçalo. The Observatory team believes that some immediate results can be achieved by increasing investments in intelligence and in the smart use of technology. This proposal is captured in the report’s list of five changes that the Observatory believes would be the bare minimum requirements to improve Rio’s security:

The Observatory’s event also featured speakers from institutions such as the Federation of Favelas of the State of Rio de Janeiro (FAFERJ), the violence monitoring app Defezap, and the NGO Favelas Observatory, among others. Amnesty International Brazil representative Renata Neder reflected that one only needs to look at past examples of increased military presence in other states to see clearly that “the use of armed forces has not reduced violence or crime.” Raquel Willadino from the Favelas Observatory highlighted how taking a “critical but also constructive perspective” was necessary in order to help change future policy and respect the rights of those most affected by the violence perpetuated by the military intervention.

Cecília Oliveira, co-creator of the Fogo Cruzado app, stressed the importance of collecting and presenting data that has been “systematically ignored by the authorities.” The accessibility of facts through the Observatory’s new site and report, she added, will allow the general public to see “the bigger picture of what is being done” in their city. By aggregating data on shootings around the city, technology such as Fogo Cruzado and data consolidated by the Observatory impede the dangerous normalization of violence around the city.

The report presentation came to a close with an important reminder from former Military Police commander Colonel Íbis Pereira that although the military intervention has been going on for just two months, the Armed Forces have been present and active in the state of Rio de Janeiro since August last year. Continuing this way would be “crossing a dangerous line for democracy,” he argued, calling for significant changes to Rio’s public security model. Ramos assured the audience that the Intervention Observatory will continue to monitor and present all data collected, while pushing the authorities for transparency on expenditures and plans for the intervention’s future directions.