For the original article by Jorge Barbosa in Portuguese published by Observatório de Favelas click here.

Favelas are fruitful places for the creation of culture. Samba, capoeira, and choro are dances and music that have defined Rio’s aesthetic. Funk, hip-hop, break dancing and forró represent the experiences of the people living in favelas. Graffiti, photography and video have re-written what it means to belong to this city.

Favelas make culture flourish in Rio de Janeiro. In their alleys, narrow roads and small squares happen the interactions that weave an extensive fabric of sociability, religion and humanity. It’s the mix of art and life that transforms everyday hope into culture.

It is for this reason, and many others, that favelas are territories of experimentation with simplicities and challenges. From afar we don’t identify monumental cultural facilities. There are no grand buildings, nor do favelas illustrate the city’s landscape. But as we approach them, a plurality of inventions and practices that give meaning to human existence gain prominence. 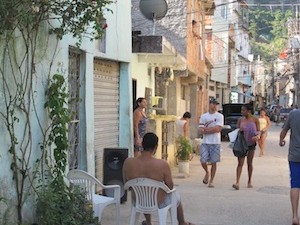 On the sidewalk, children creatively resume the games of their parents and grandparents. On the corner, we smell the flavors of Northeastern food. Further ahead you experience the sonorous aroma of feijoada with pagode. While motorboys circulate endlessly, religious saints line the façades of buildings. Internet cafés are neighbors to street vendors and small bars.

Phones, iPads, and cable television. Búzios, love telegrams, and battery-run radios. At a crossroads between speed and slow motion. Urban consumption enters the favela, then both seduces and is seduced by its surroundings. A new game is invented; a game where we both find and lose ourselves on a map of meanings. It is a geography of ourselves with those who are different, which creates ‘the city.’

Culture is patrimony inherited through the material and physical world. But it is also the awareness of ourselves. A sense of belonging to something that belongs to us: a territory. A virtual dwelling that allows us to express ourselves in various ways and meanings. It is by way of its territory that culture carries the possibility of its appropriation as a concept and its visibility as a social practice. Can we live in the city sharing experiences across different social groups? The favela invites you to visit: drop by anytime. 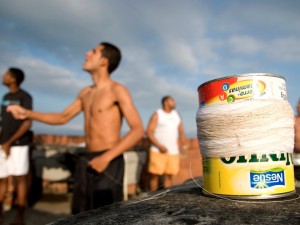 Culture is to live in an unfinished work of art, mainly because cultural creation is an act of symbolic exchange, corporeal and material, amongst human beings. In this way we build bonds and interpret our presence in society. However, culture allows us to examine our position, our place, our existence. Culture is embedded in our practices and social conduct. Hence the political centrality of culture to build a transformative project for the contemporary city.

We need to live culture in a way that is more rich, intense and plural if we’re going to be capable of inventing the future. For this reason we renew our invitation: experience the cultural composition that makes up the favela.