On the rainy night of Friday, August 3, the community of Chácara do Catumbi had much to celebrate: after 17 years of struggle, 17 of the community’s 22 families were the first in Rio de Janeiro history to receive land titles through the legal instrument of collective adverse possession. These titles fulfill community members’ constitutional right to acquire the land on which they have resided for over fifty years.

Also known as Solar do Barão de Chichorro, Chácara do Catumbi sits below the favela Morro da Mineira, in the Catumbi neighborhood in Central Rio. The community has faced eviction threats since 2002, prompted by the implementation of the municipal favela upgrading program known as Favela-Bairro. At the time, as part of those upgrades, Mayor César Maia proposed to transform the site of Chácara do Catumbi into the Rio Samba Cultural Center, an unrealized project linked to the construction of Samba City in the Port Region. After suddenly receiving eviction notices from City authorities in May 2002, residents were thrust overnight into a battle for their homes. In 2006, the community initiated legal action against the City, seeking definitive land titles through collective adverse possession. In May 2017—a decade after the case began, and 17 years after the first eviction threats were issued—the community won the legal battle. Finally, this year, properties were officially registered, and on Friday, land titles were delivered at a ceremony held in the community to celebrate the occasion. 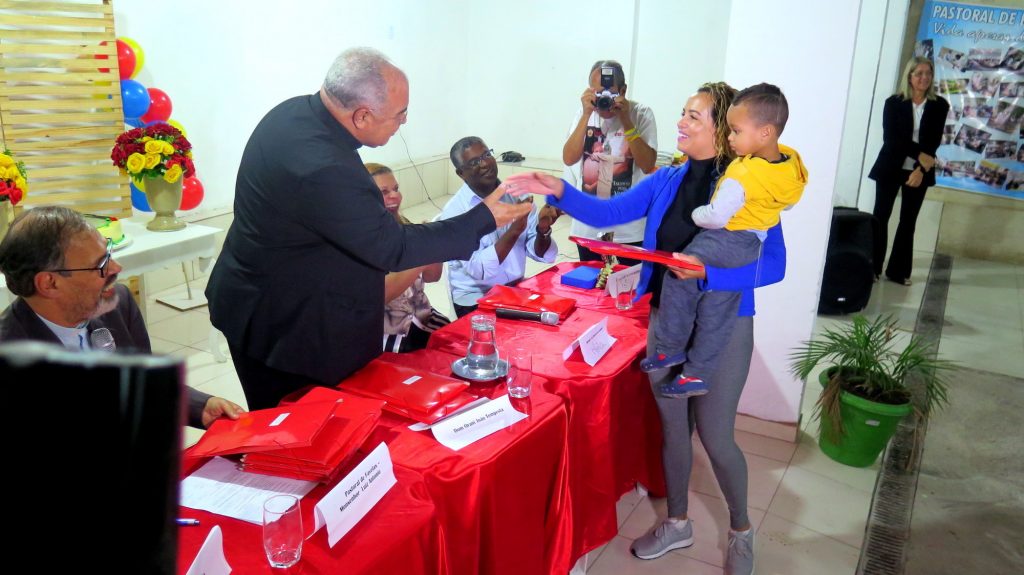 “There is history here,” affirmed Mônica Honorato Rebello—community member, former Residents’ Association secretary, and activist. Solar do Barão de Chichorro, as the community was originally known, formerly comprised part of a wealthy family’s residence that extended into present-day neighboring favelas in Catumbi. According to Rebello, numerous slaves and grounds workers also resided on the land. In fact, slaves began building the residence in 1885, and it wasn’t officially completed until the mid-20th century. Rebello continued: “Slaves were kept here. This was a place of a lot of pain, of suffering. There were slave quarters and also underground slave housing. There was a house for lepers, where they took care of them. They had many workers and slaves. This history has become part of the community.”

Over time, the members of the landowning family moved away or died, and the land was eventually rented. However, once the official owner died in 1994, rent stopped being collected—though residents continued to pay property taxes.

Residents of Chácara do Catumbi lived in relative peace for a little under a decade—until the City government issued eviction notices. “It came all pre-planned: in 2002, a decree from César Maia, an eviction order. All of the families would be removed from the area as quickly as possible to construct the Samba Cultural Center. They would construct hotels, a highway would pass nearby. They didn’t warn us at all—it all came already decided. This was when our fight began, our suffering.”

According to residents, the story goes that Maia’s administration did, in fact, meet with a community leader about the project, which was to be implemented through the Favela-Bairro program. Maia allegedly obtained approval from that leader—who at the time was president of the Residents’ Association of Morro da Mineira, to which the community belonged. While this individual officially denies the allegations, community members recall seeing her enter Chácara do Catumbi with a team of photographers to document the area. Some residents believe that her team took photos of the abandoned parts of the community in an effort to prove that Maia’s plan would, in fact, improve the area. Regardless, the Maia administration claimed to have obtained “community approval” when, in reality, residents of Chácara do Catumbi were excluded from the process. And so the struggle began.

Rebello described the situation: “People began to panic. We weren’t able to sleep anymore. A lot of people lost weight, became skinny. Many people here have children, there are elderly people, there are sick people that live here… It was then, in 2003, when I discovered that I had lupus. It all came at once—like a bomb had been dropped. I was in a wheelchair for three years, knowing that I would have to leave my house without the power to defend myself because it all came pre-decided. They came with threats, projects, documents, police officers… to make us uncomfortable. They threatened us. We didn’t know what to do. They wanted to take us and put us on Itapiru Street [the main road in Catumbi], in an empty lot. This lot borders five favelas that are at war.”

Rebello’s husband, three-term president of the Chácara do Catumbi Residents’ Association, was offered R$390,000 by the City government to step down as president, stop fighting the project, and leave the community. He described experiencing intense pressure from both outside and inside the community. As observed in communities facing eviction across Rio, government officials have strategically stoked disagreements within threatened communities to weaken their resistance efforts. “Internal fighting and external fighting, it was no joke,” he recalled.

“We wouldn’t accept it and we told everybody what they were trying to do. Then the threats began. We didn’t have peace, we were scared to walk down the street—[afraid] that they would kill us. We were fighting the mayor. Who would have the courage to fight a mayor? No one. But we were fighting for our rights,” Rebello stated.

Fortunately, the community gained assistance in their fight. Early in their struggle, they were helped by the Bento Rubião Foundation, a nonprofit with the mission of defending human rights and actively involved in land rights cases. Many community members credit the Foundation’s assistance and that of their lawyer, appointed by the Foundation, for helping them win the fight against the Maia administration. Eventually, Maia conceded and their case was passed onto the Pastoral de Favelas, an outreach and support branch of the Archdiocese of Rio de Janeiro that has a long history of helping communities assert land rights. Seventeen years after the struggle began, the community finally received land titles.

At the event held in the community on Friday night, the excitement was palpable. Tears of joy ran down the cheeks of many attendees—community members and supporters alike. Battles against the City do not often result in celebration, and leaders from communities currently facing eviction were present to drive that message home. Moving forward, residents of Chácara do Catumbi now have a legal guarantee—an unprecedented achievement for the community—but the struggle continues. “These 17 years have not been easy. For me, receiving this certificate was [the result of] many years of war. The insecurity of having to leave my house was so immense that today, I need treatment to get rid of this feeling—to prove to myself that I have my house and I won’t lose it anymore… I have carried this around for 17 years, telling myself that I will lose my house,” lamented Rebello.

Despite the persisting challenges at hand, it was a night of remembrance, gratitude, and solidarity. The Rebellos believe that their case will set precedent and permit other families to apply for land titles through collective adverse possession, which dramatically reduces bureaucracy over individual adverse possession claims—particularly residents of neighboring communities situated on land that historically belonged to the same estate. As for now, these families’ struggle will go down in the history of Rio’s favelas as an example of how collective resistance can indeed succeed, serving as a model for other communities facing eviction. Chácara do Catumbi indeed has a rich history—one in which its current residents can now permanently partake.

Slideshow of the Titling Ceremony in Chácara do Catumbi [also on Flickr]: 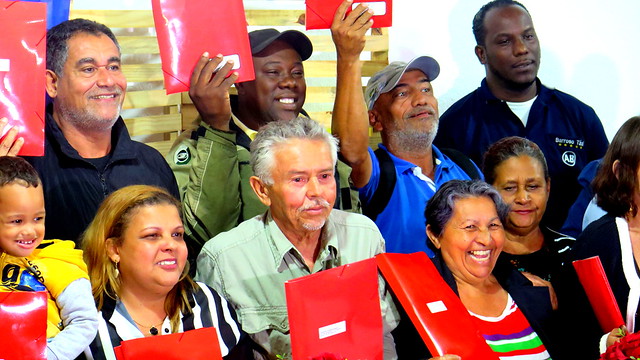