For the original article in Portuguese by Lola Ferreira published by HuffPost Brasil click here. This article is part of the Todo Dia Delas (Women Every Day) project, an initiative by C&A, Oath Brasil, HuffPost Brasil, Elemidia, and CUBOCC to celebrate 365 women throughout the year.

“Is Aunty Fabbi coming today?” This is a recurring question among children in the Parque das Missões favela in Duque de Caxias, in the Baixada Fluminense region of Greater Rio. What they really want to know is whether the poetry circle will be happening on Saturday—an event geared towards children aged three to sixteen that has been running for nine years. The “aunty” responsible for stimulating the children’s interest in reading is Fabbiana da Silva, 35, who has lived in the community for two decades and is the founder of Apadrinhe um Sorriso (“Sponsor a Smile”). Silva doesn’t hide the fact that from the beginning, she has always wanted to work with the children’s mothers. She decided that her first step would be to build relationships with the kids, in order to then go on and build relationships with their mothers. The goal? To free them from situations of domestic abuse and everyday violence.

Apadrinhe, as Fabbi calls her association, was founded in 2009. The project began through a Christmas gift drive—delivering clothes, shoes, and toys to children—which then led to sporadic Children’s Day activities and other events. A few years later, Silva decided that she wanted to focus her work on women in Parque das Missões, but she knew there would be resistance. To gain the trust of adults, she began with their children, creating a reading group so that the kids could get to know, discuss, and analyze works of literature.

“In my day, the library was always closed—but not anymore.” 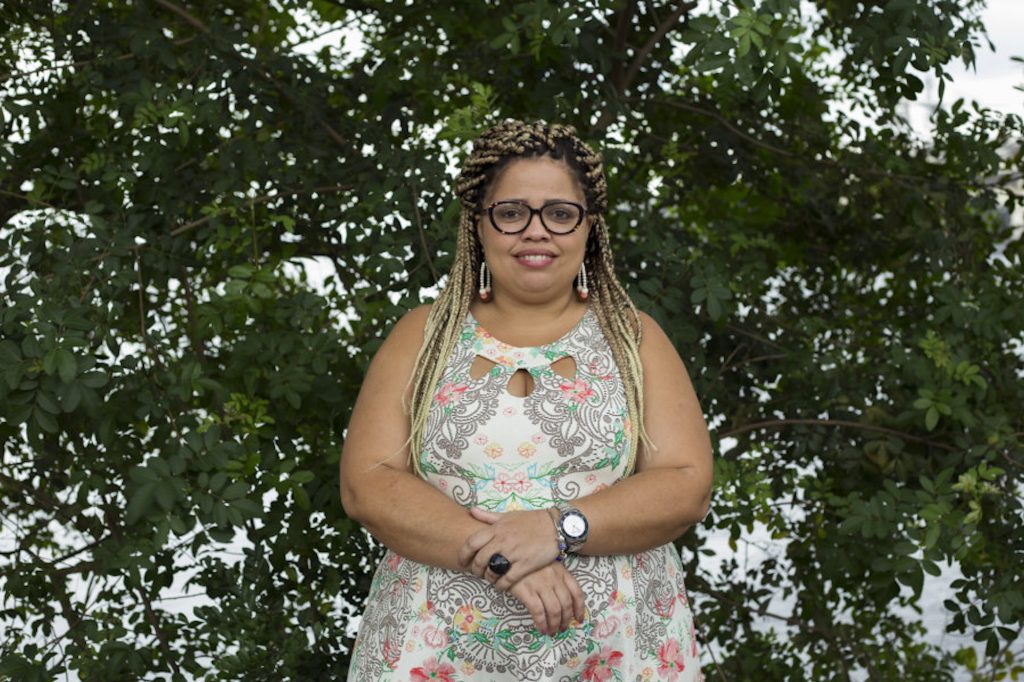 “The poetry project has led to changes in the structure of the favela. A classic example: the children started asking the school to stay open over the weekend, and for the library—which used to always be closed—to remain open. In my day, the library was closed. Today that’s no longer the case,” says Silva, who is not financially compensated for her work with the association, balancing it with her paid job at the Rio de Janeiro State Public Defender’s Office.

In 2014, the poetry project was awarded a prize at a ceremony focusing on positive actions in the Baixada Fluminense. In 2015, Silva decided that it was finally time to approach the mothers and bring the discussion on feminism and domestic violence to the favela.

“The goal was to make children feel loved and cared for, of course, and I do really love working in education. But they were also a way for me to get to a place where I could look at these women and get them to see how important their lives are,” she recalls.

Silva called a meeting to talk about the latest Christmas drive, but once the dozens of women were together, she delivered a “bombastic” presentation on feminism, violence, and rights. It didn’t have the intended effect. A young 14-year-old mother raised her voice and asked, “Do you think you’re better than us just because you’re educated?” The girl also briefly recounted the regular physical violence that she suffered in her home. Although this reaction was unexpected, it was the first short dialogue to take place in that space.

For me, it’s unacceptable for a 14-year-old girl to wake up every day with a black eye and think that it’s normal.

“I replied: I am no better than anyone here, but we have to come together to change your reality. For me, it’s unacceptable for a 14-year-old girl to wake up every day with a black eye and think that it’s normal. Feminism, through concrete action, can show us how to get out of these kinds of relationships,” she pointed out.

At the next meeting, half of the women showed up; at the third meeting, only two. There were days when no one came. Even so, Silva kept insisting. She would call a group of women and ask those women to call their friends, and so on until the women’s group became a permanent fixture for women in Parque das Missões.

“They started identifying with me, mainly because I started to change my way of speaking. I needed to use language that would connect their reality to feminism,” she says.

Children are the agents of this process: when you grow up in the midst of everyday violence, you start to reproduce that violence.

With less academic jargon and more time spent on exchanging experiences, Silva has heard stories about abortion, marital rape, severe physical violence, and many other age-old issues that continue to affect women in the 21st century. Fabbi’s main job, therefore, is to show these women—women just like her—that their lives matter.

“These are very violent narratives. I tell them that it’s important to understand where you are, where you live, and how it impacts your life and your children. Children are agents of this process: when you grow up in the midst of everyday violence, you start to reproduce that violence,” she recounts.

Like the results of the poetry project—which, ten years later, is now welcoming former participants as volunteers—Fabbi is already seeing the fruits of her labor with the women’s group too. Many women have left abusive relationships and have managed to rebuild their lives, far from the men who were mistreating them. And, above all, they have stopped naturalizing violence and have recognized that they are human beings worthy of respect.

“When you look at the reality of these women, who put themselves in this place where they could be killed and yet ‘everything is fine’, you can see that something has to be done. This can’t continue. We want women to live—to thrive, work, create, and even have relationships, so long as they know that they can always leave,” she says.

The main thing for me is understanding that the work that I do, above all, is also so that I can understand myself as a woman. 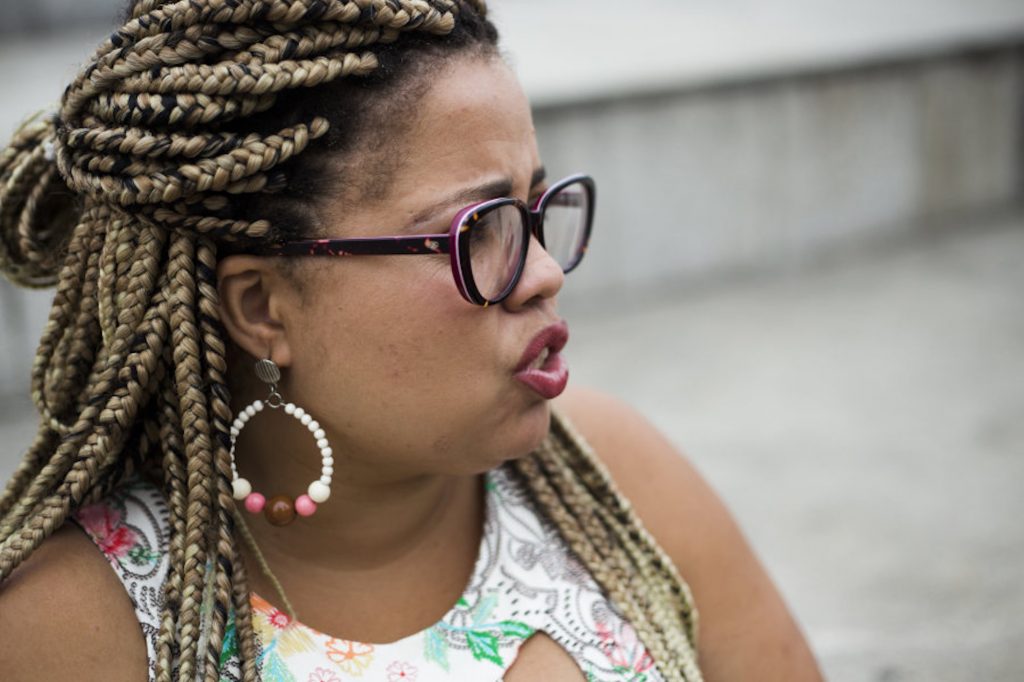 Silva dreams for all women to realize that they can be free. “My mother taught me that I can do whatever I want with my life. I was lucky—not all girls get this message. The main thing for me is understanding that the work that I do, above all, is also so that I can understand myself as a woman.”

An advocate of feminism, Silva points out the need to adapt the discourse to the reality of the favela. Just as she avoids academic jargon, Silva doesn’t push feminist causes that are not pertinent to the reality of the favela. The priority is addressing urgent issues: “Feminism is the possibility of women being free. We shouldn’t live in a country where, today, we still don’t see ourselves as people who belong to this society,” she says.

By strengthening dialogue and support for women, the activities with children have grown beautifully. Beyond the poetry project, Apadrinhe um Sorriso promotes cultural tours to access activities and services to which the children typically lack access, such as high-quality children’s theater, capoeira classes, and music. Her work is for everyone: “There are a lot of young people involved in drug trafficking who look at me as a role model for their children. They don’t want the new generation to live the way that they are living,” says Silva, who believes in the community’s structural transformation through culture.

I want them to explore the world, but also to understand the importance of people transforming their own communities. 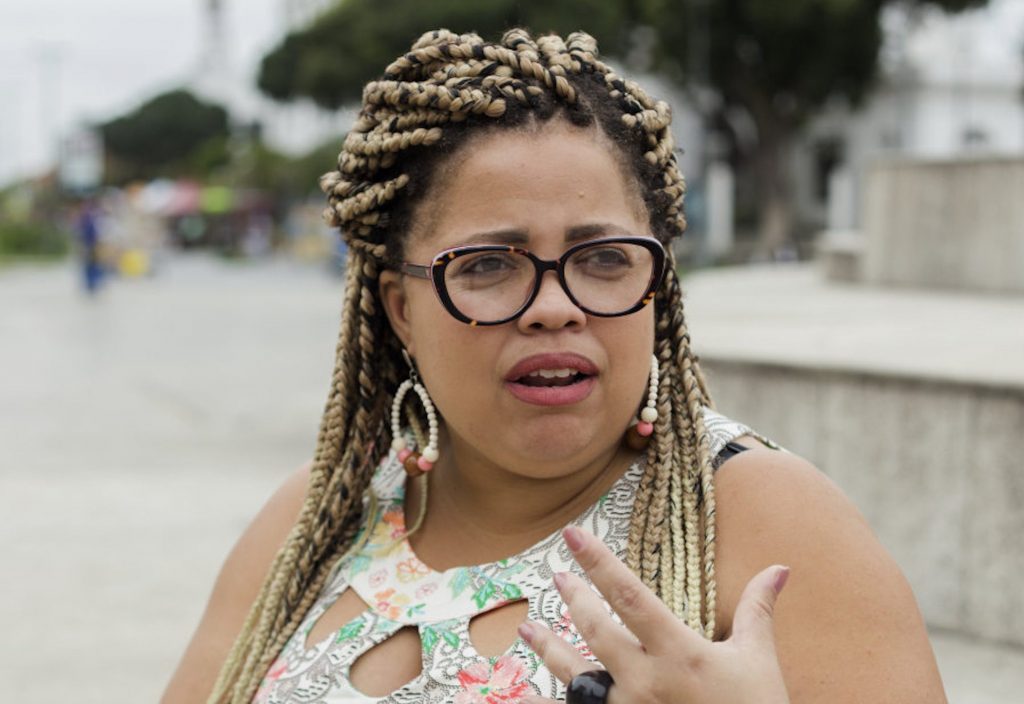 Residents of the small community help out in all of the activities organized by Apadrinhe um Sorriso, calling Silva “the General”—in a positive sense, in that she is forming an “army” of thinkers. She’s not opposed. In the future, other good generals will continue the project, which stemmed from Silva’s idea but now belongs to the entire community.

“I want young inquisitive learners. I dream that we will increasingly be able to make an impact so that young people look at the favela and see the same potential that I see in it. I want them to explore the world, but also to understand the importance of people transforming their own communities,” she concludes.