In a recent paper titled “Undervaluation of Informal Sector Innovations: Making a Case for Revisiting Methodology” published in the African Journal of Science, Technology, Innovation and Development, Fayaz Ahmad Sheikh of the Center for Studies in Science Policy at New Delhi’s Jawaharlal Nehru University discusses the marginalization and undervaluation of informal sector innovations in mainstream academic literature. Sheikh calls for a fresh perspective to be taken in future studies, shifting the focus away from the traditional Western economic tropes of exchange value, scalability, and large-scale commercialization. 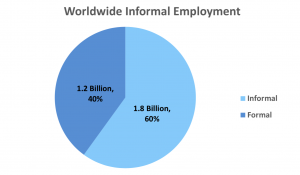 It must be noted that not long ago, any scholarship whatsoever on the informal sector—a massive force in the global economy characterized by jobs that are unregistered, unregulated, and often improvisational by nature—would have been considered a welcome advancement. The nature of the informal labor market has historically been woefully understudied, despite estimates that two out of every three workers in the world will be informally employed by 2020, according to the Organisation for Economic Co-operation and Development (OECD).

Sheikh acknowledges this phenomenon and traces its roots to thirteenth century Europe, where the intellectual aristocracy created an “objective knowledge industry” using their economic and political capital. It can be inferred that the marginalization of any form of labor or knowledge that fell outside of these elite structures was deemed unworthy of legitimate study. He argues that a confluence of religion, gender, and caste have also played a detrimental role in various parts of the world over the years by overlooking the significance of informal knowledge and innovation.

These studies note that the informal sector has distinctive characteristics across different continents and time periods. Notably, a key feature of informal innovation is the “localness” of problem identification, resource availability, and knowledge interactions. These innovations are not meant to meet the requirements of the market as we know it in traditional economic terms, but rather quite the contrary—they are “undertaken to solve the problems that markets may have left unsolved.” Contrary to the common logic that cities and urban areas drive innovation and growth, the studies find that the most prominent informal sector innovations actually emerge from rural settings, often with self-use as the biggest driver. But a motive of localized self-use does not mean that creativity is lost. Because many informal innovations are never designed with value maximization in mind, they are full of irreverent and “anti-rational” design choices.

Other distinctive features cited include the “uncodified” nature of informal knowledge and the informal nature of the education received by most informal entrepreneurs; and the higher levels of autonomy and freedom experienced by informal workers. Ironically, these are two core features of the 21st century workplace ideal that workers at so many “innovative” companies in the formal sector strive to achieve.

Sheikh concludes that in order to truly assess the value of innovation in the informal sector, a full paradigm shift is required—departing from the predominant framework that confines “value” to merely the economic value and innovation created through large-scale commercialization. Studies should instead be designed with a participatory action research approach, co-created with informal innovators and linked to their local realities. Moving away from a market-driven understanding of the innovation fostered in the informal economy should help uncover a greater appreciation for the underlying knowledge and creativity of this ever-present and growing sector.