For the original article in Portuguese published in O Globo click here.

Protests against racism and police violence have broken out in the United States and Brazil, in the middle of the coronavirus pandemic, calling attention to the importance of the antiracist struggle in these countries. In addition to protests organized by movements like Black Lives Matter and, in Portuguese, Vidas Negras Importam, the issue of race is being highlighted daily by a range of intellectuals who see the question of racism as central to these societies.

Many of these thought-leaders have been sharing content for free on social media. O Globo has selected a few of these intellectuals, all of whom can help those who want to better understand the structural problems caused by the history of slavery in Brazil and how racism continues to produce inequality in the country.

Silvio Luiz de Almeida is a lawyer, professor at the Getúlio Vargas Foundation (FGV) and Mackenzie Presbyterian University, in Brazil, and at Duke University in the US. In his books, articles, and publications on social media, he discusses how structural racism manifests itself in Brazil, using examples that range from soccer to questions of national politics and the law.

Who would have guessed that racism would stand out as one of the central questions of the 21st century? Answer: practically ALL the intellectuals who have studied the topic in depth. The perplexity at the protests is a sign of the neglect and the negligence of a topic which has always been fundamental.

Sueli Carneiro is a philosopher and activist with a PhD in education from the University of São Paulo (USP). She is the founder of the Geledés Black Women’s Institute. One of the pioneers in articulating the intersectionality of race studies and gender issues, Carneiro also studies how actions like the establishment of affirmative action policies in universities impact the transformation of social indicators in the black population.

Friends [written in Portuguese three times to include all genders]

In the name of the Geledés Institute for Black women, I would like to invite you to participate in our campaign about the genocide of the black population, happening today on Twitter.

Philosopher and writer Djamila Ribeiro is the author of books like O que é o lugar de fala? (What is Place of Speech?), Quem tem medo do feminismo negro? (Who is Afraid of Black Feminism?), and Pequeno manual antirracista and (A Short Anti-Racist Handbook). Ribeiro is also engaged in disseminating intellectual works by black women from throughout history. 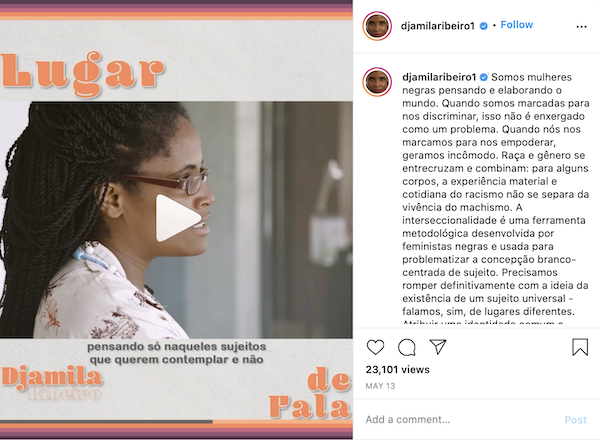 We are black women contemplating and developing the world. When we are targeted by discrimination, this is not seen as a problem. When we act to empower ourselves, we cause discomfort. Race and gender are interwoven and combined: for some bodies, the material and daily experience of racism is not separate from the experience of sexism. Intersectionality is a methodological tool developed by black feminists and used to challenge the white-centered conception of the subject. We need to definitively break with the idea of the existence of a universal subject—yes, we speak from different places. To attribute a common identity to categories which are distinct socially is a categorization error. And if we work with this hypothesis, how can we aim for the emancipation of black women, using the experience of sexism experienced by white women as a basis? Caution is needed when defining the reality we are talking about. We must understand that differences are a problem when they mean inequality.

Edit: in the editing of the video, the não (“don’t”) was deleted. The correct version is “a gente não eleja qual opressão é mais importante” (“we don’t choose which oppression is most important”).

Journalist and O Globo columnist Flávia Oliveira addresses racism from perspectives like that of the economy, in which she shows how black people face the highest rates of unemployment, for example.

In the first set of statistics about the pandemic in the USA, in Louisiana, seven in every ten deaths were of black people; in Chicago, 72%. This is the outcome that awaits Brazil, where black and brown people are almost 56% of the population. The crisis has a color and a gender. It is black and female. Article title: Black people and women face the highest rates of unemployment.

Academic and digital influencer Winnie Bueno is the creator of the project “Winnieteca,” which connects people through donating books to promote the debate against racism.

Director of Amnesty International Brazil, Jurema Werneck is also a medical doctor and holds a PhD in communication and culture from the Federal University of Rio de Janeiro (UFRJ). She works with themes including human rights and public policy for the black population.

Words fail us in the face of another black person killed by officers of the State! In the USA and in Brazil, we must always fight against #racism! #VidasNegrasImportam #BlackLivesMatter

Anthropologist, historian, and professor at USP and Princeton Lilia Schwarcz is a reference for race studies in Brazil and the author of works like Nem preto nem branco, muito pelo contrário (Neither Black nor White, Quite the Opposite) and Retrato em branco e negro: jornais, escravos e cidadãos em São Paulo no fim do século XIX (A Black and White Picture: Newspapers, Slaves, and Citizens in São Paulo at the End of the 19th Century). 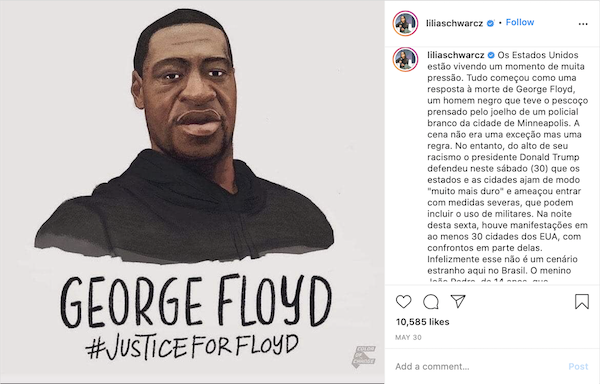 The United States is experiencing a very high-pressure moment. Everything started with a response to the death of George Floyd, a black man whose neck was pressed down on by the knee of a white police officer from the city of Minneapolis. The scene was not an exception, but the norm. However, at the height of his racism, President Donald Trump defended that states and cities act in a “much tougher” way, and threatened to introduce severe measures, which could include the use of the military. On Friday night, there were protests in at least 30 cities in the USA, with clashes in a portion of them. Unfortunately, this isn’t an unfamiliar scenario here in Brazil. João Pedro, a 14-year-old boy, who “disappeared” after he was shot in a police operation in Rio, and taken away by a helicopter, with the family only managing to find the body on this Tuesday morning [May 19], at the police morgue, is proof of the black genocide committed here in Brazil as well. It will not be with force that we end racism. It will not be with stereotypes either. These deaths must not become cold statistics. We need to face the central theme, which continues to be the killing of black people by the police: here and in the United States. There is no democracy with racism.