On the outskirts of São Paulo, the pandemic did not prevent repossessions of people’s homes. On June 16, the Military Police arrived at an area called Roseira, in the favela of Guaianases, in the far east of the city of São Paulo. They were there to execute a judicial order and evict roughly 900 people who were living in the area. According to local residents, the agents arrived at dawn, around 2am, and around 6am, the shacks where they had lived were demolished during the repossession.

Two months after the event, many families still lack a housing solution. A former telemarketing attendant who is currently unemployed, Samara de Lima*, was one of those removed. With two children, she lost her job in early March and found shelter during the area’s occupation. “Now I am supported by relatives, but I cannot stay here for months. I don’t know what to do to find a solution,” she said.

Autonomous worker and community leader Dania Lima de Oliveira, 55, reports that those removed that day now occupy an area on the edge of a stream in the region. “Some went temporarily to their family homes, because they did not have money to pay rent, while others went to Ipê Stream,” said Oliveira. At the new location, sewage runs alongside the new shacks.

When she remembers the episode, Oliveira highlights social vulnerabilities. “It was a very sad thing because we see that there were a number of people without a clue as to what to do; they are mothers and fathers of families,” she recalled. “They did not have a sense to life, because they had nowhere to go, and that was even before the pandemic.”

She said that many people in the occupation were unemployed and lost their income during the Covid-19 pandemic: “Their situation worsened with this virus. There are several families that need help.” 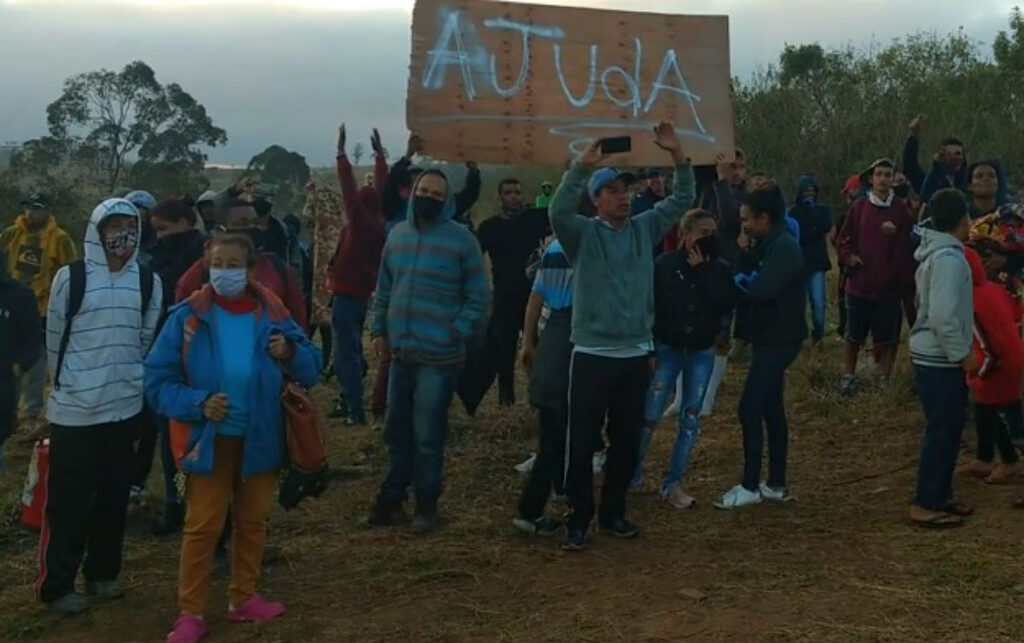 According to the judicial decision by magistrate Alessander Marcondes França Ramos, of the São Paulo Court of Justice, 4,000 Cohab public housing units will be built in the area. However, residents of the occupation say that they were not registered in any city housing program.

According to the Evictions Observatory, the repossession in Guaianases was decreed as a matter of urgency, without allowing families the opportunity to consult a lawyer for defense. Also according to the Observatory, more than 1,900 families have been affected in evictions across the state of São Paulo since March 2020, the month which marked the start of the coronavirus pandemic.

Renato Abramowicz, from LabCidade at the University of São Paulo’s Architecture and Urbanism School (FAU-USP), commented that the majority of removals took place without any form of public assistance for those removed. “After being removed, it is very difficult to get information about their destinations, not least because there is no interest and care on the part of the public agents and judges who enact the removals,” he asserted.

He reported that many people who suffered repossessions went to other occupations or to spaces in precarious situations, and that some people even went to the streets. “All of this, which typically happens, becomes even graver in the current context of the pandemic,” he said. The researcher also criticized the actions taken by the city of São Paulo and the decisions taken by the São Paulo State Court of Justice (TJ-SP). “It is also appropriate to denounce the intention of the city government, led by Cohab, to remove two entire blocks in the central region of the city, in Campos Elíseos,” he said, and concluded that “the violence of the loss of home is added to that of the forced exposure and risk of contamination by the new coronavirus, and the TJ-SP is responsible for these serious violations.”

The São Paulo city government, through the Municipal Secretariat of Assistance and Social Development (SMADS), informs that the team of the Reference Center for Social Assistance (CRAS) Guaianases appeared in the area of ​​Sítio das Roseiras and offered emergency shelter to the families on site, but none accepted the offer.

Regarding the decisions, the Court of Justice said that it does not issue a position on jurisdictional issues, and also stated that the magistrates have functional independence to decide according to the documents in the case file and their free conviction. It also wrote that the independence of judges is a guarantee of the rule of law itself.

For an End to Removals

Last month, some housing movements in the state of São Paulo, such as the Landless Workers’ Movement (MTST), sent a complaint to the United Nations (UN) about the evictions that have occurred during the Covid-19 pandemic.

“What we have seen in the state of São Paulo, in practice, is the continuity and fulfillment of forced evictions of populations, making it so that women, in many cases pregnant, men, children, the elderly, people with disabilities and comorbidities are exposed to the violence of removal and homelessness, plus exposure to the new coronavirus,” states the complaint.

In July, Balakrishnan Rajagopal, the UN special rapporteur on the right to adequate housing, recommended that Brazil halt evictions during the pandemic. “Brazil has the duty to urgently protect everyone, especially communities at risk, from the threat of Covid-19,” he said. “Evicting people from their homes in this situation, regardless of the legal status of their housing, is a violation of their human rights.”

*The interviewee requested anonymity: Samara de Lima is a pseudonym.