What do City Councilors Do?

It’s a city councilor’s role to propose, discuss, and approve laws that will be applied in each city, in addition to having the duty of accompanying actions of the executive branch of municipal government—the mayor—assuring that goals are being met and legal norms are being followed, above all in relation to the budget.

Maré de Notícias made a summary of the principal responsibilities of a city councilor, in addition to explaining how to oversee and participate in the governance of your city councilor, if they are elected, and how you can also find out about campaign donations and funds received by your candidate. 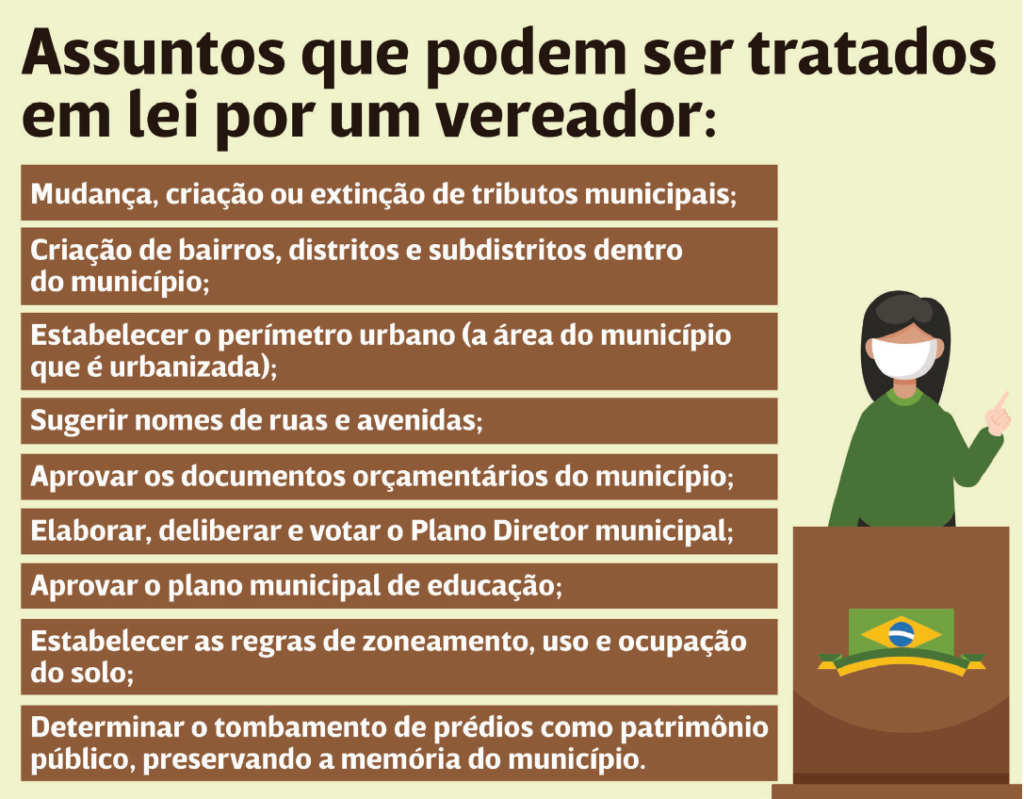 Issues that can be addressed in a law by a city councilor:

According to Data Rio, currently, of Rio de Janeiro’s current 6,718,903 inhabitants, 22% live in favelas. However, the Regional Electoral Court (TRE-RJ) does not have information about how many electoral zones are in favelas or an estimate of the percentage of voters in these areas.

The prohibition of coalitions for city council elections was adopted in a 2017 constitutional amendment, labeled an “electoral reform” to correct distortions in the electoral process. Among them, prohibiting coalitions avoids a scenario in which a voter chooses candidate A, but ends up electing candidate B, from another party.

With the prohibition of coalitions to elect city councilors, now the parties cannot make alliances to increase their chances to gain multiple seats in city legislatures. In practice, this could lead to less diversity of parties in the legislature. It is likely that small parties (Brazil has over 30 political parties) have less chance of occupying one of the 51 seats in the municipal legislature, because it will depend exclusively on the votes that each one of the candidates (or party) can get.

How Many Votes Does a Candidate Need to Win?

Elections for city council are more complex than elections for mayor, in which the candidate who receives the most votes wins. In the system of city council elections, each voter chooses a candidate or a party by entering the corresponding number. Each candidate has five digits that represent him or her in the electronic polling station, while each party has two. All valid votes are counted—that is, blank votes and null votes are not counted—and are divided by the number of seats in the city legislature. In Rio de Janeiro, that number is 51. This yields an electoral coefficient: the minimum number that each party needs in order to elect a councilor. Afterward comes the calculation of the party coefficient, in which the party’s valid votes are divided by the electoral coefficient. This determines how many seats each party may occupy in City Council.

After these calculations, a “cut-off note” is defined, which are the minimum votes that an individual candidate must receive, inside his or her party, to assume one of their seats. It is equivalent to 10% of the electoral coefficient. The candidates that do not reach the cut-off note, even if their parties have a right to a seat through the party coefficient, do not earn a seat. If the party does not have candidates who reach the minimum vote requirement, this party loses the right to its seats that are not pre-filled. This cut-off note aims to guarantee that candidates who are elected win a minimum number of votes at the polls, keeping in mind the reality of “vote-pullers.” These are candidates who, because they receive lots of votes, raise their party’s coefficient and grow their party’s chances to elect more candidates. The cut-off note was established to avoid electing very low-vote candidates through this system. It is in this complicated game of mathematical proportions that candidates must win to conquer space in the 2020 municipal elections.