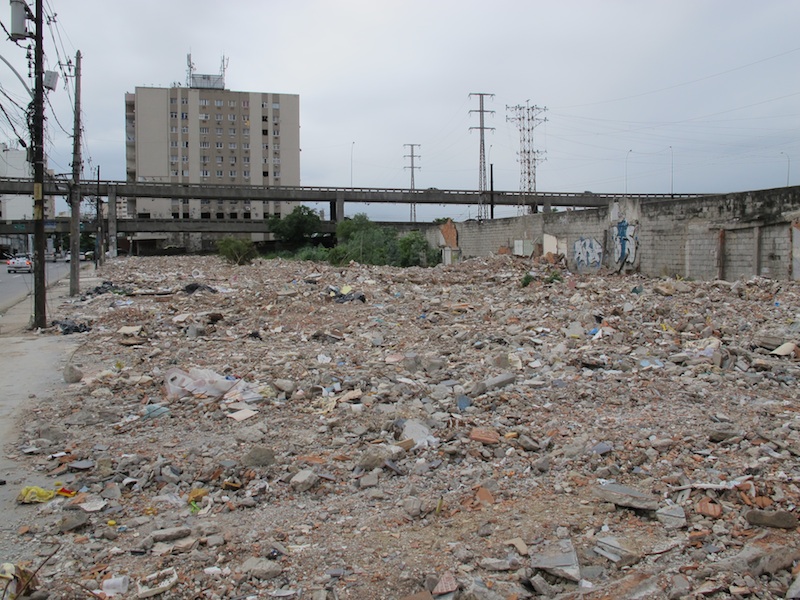 Over two years after the eviction of Favela Metrô-Mangueira, also known as Favela do Metrô, began in November 2010–to make way for what was rumored to be a car park to accompany the Maracanã stadium for next year’s World Cup and the 2016 Olympics–the brutal process continues. And residents and the public are still in the dark as to what the site will be used for.

Since the initial evictions began, the once peaceful community has been relocated in three groups, dependent mostly on their willingness and ability to resist the City government’s constant pressure. The first group of 107 families, often elderly and more fragile community members who did not realize resistance was even an option, were victims of the City’s seemingly random demolition of residences starting the week of November 4th 2010. These families were moved over 40km (nearly 2 hours in public transit) to the West Zone neighborhood Cosmos, severing community ties and causing many to commute hours to work. Families relocated to distant neighborhoods also complain of severe infrastructure shortages including transport, health care, and education services. 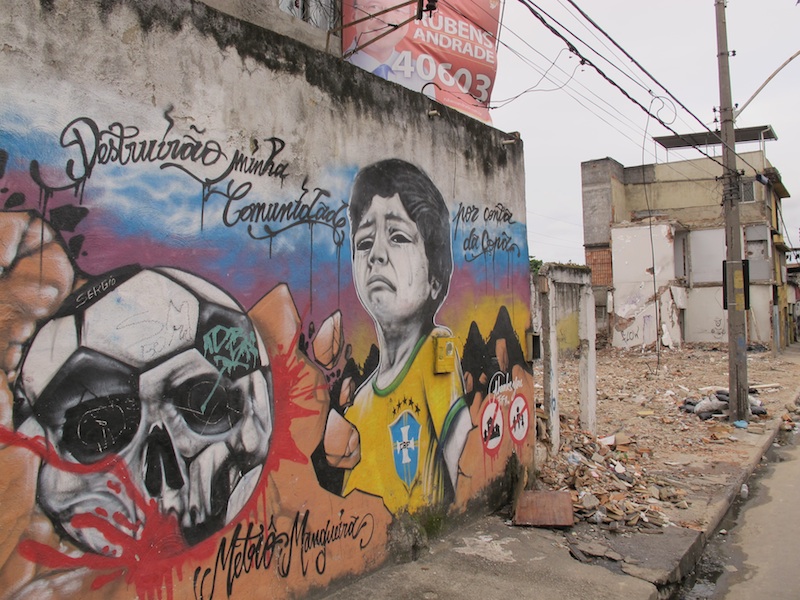 Following this first group of evictions in Metrô, the majority of residents, determined to resist, elected a new neighborhood association and began a fight to stay, but the rubble and half demolished shells of former residences were left and public services (electricity and garbage) ceased in the area. The result: an infestation of rats, mosquitos and dengue, an influx of homeless and drug users and an overflow of garbage, including needles, into debris-filled former residential lots. The City government began citing public health concerns as reason for further eviction, and residents for the most part began agreeing that relocation–nearby–would be better given this state of ruin. The second and third group, after considerable resistance utilizing public defenders, the Catholic Church, non-profits and the international media, were relocated to new housing complexes, originally intended as middle-income housing–not for them–in neighboring Mangueira. The housing complexes are known as Mangueira I and Mangueira II. 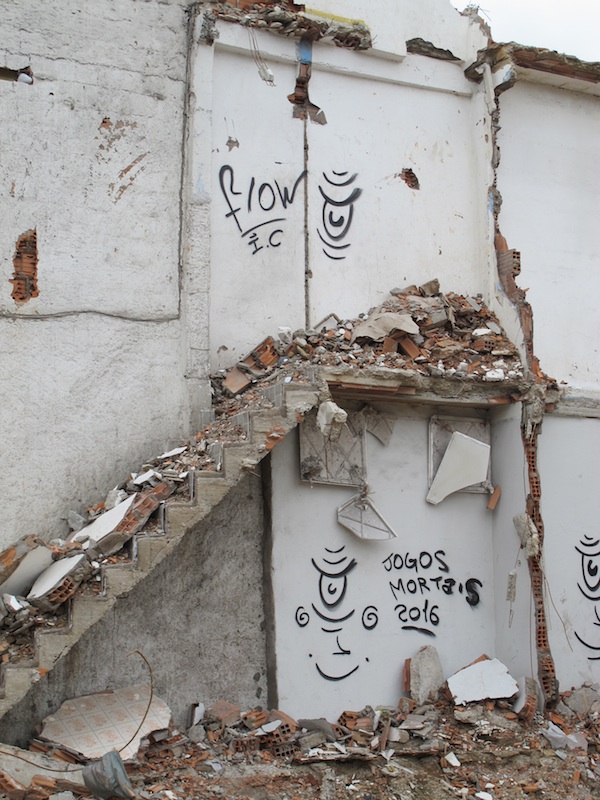 Of over 700 families that once made up this vibrant community, only 65 are left. Most of the remaining families lack the necessary documentation to qualify for relocation and so have been left to a final, fourth round of resettlement. They will be housed in a housing complex being completed in Triagem, two metro stops away.

The commercial strip remains operational, but many businesses have closed. A former resident and determined resister, Eomar Freitas rents the first and now last of around a dozen botecos (small bars), and confirms that business has plummeted. In addition, the influx of homeless and crack users has caused the area to experience a rise in crime. Contrary to previous visits by RioOnWatch where Eomar and other community members guided us around the community without fear, this time he discouraged us from visiting what remains of the favela, even in broad daylight. What we do see of the former main residential area of the community now resembles the aftermath of a military invasion, a complete wasteland. Eomar points to the wall where his house once stood. 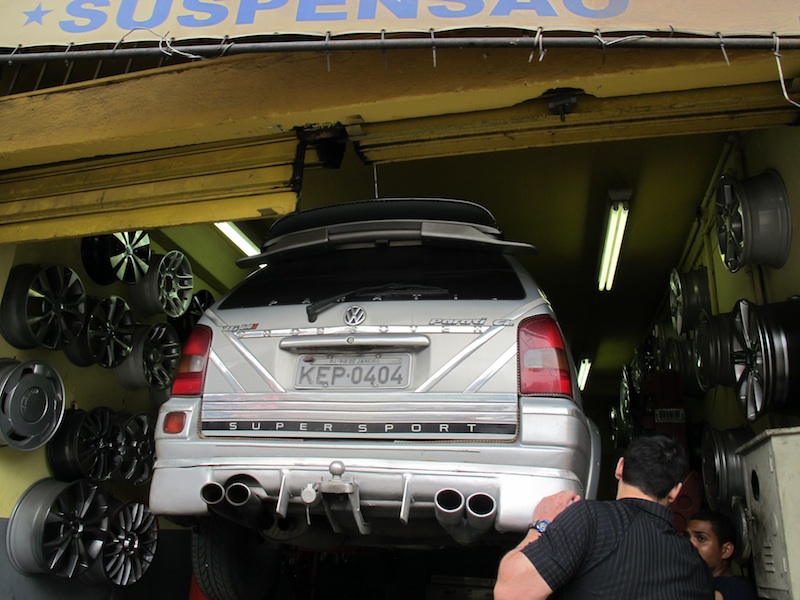 Currently, the commercial strip is under ongoing negotiations for relocation. Shop owners are being required to take a training course offered by SEBRAE, to help them better prepare to run their shops in what is promised to be a new, improved, but smaller strip called “Parque Linear Automotivo Metrô-Mangueira.” In other words, the City is training the business owners to run their businesses on the new strip without any of the merchants being certain they will have a store at all.

When asked about his current housing situation in Mangueira II, where the third grouping of 248 families were rehoused, Eomar says he is satisfied with the overall condition of the apartment itself: it is bigger than the floor he occupied on his four-story house shared with other relatives, including his mother, who received her own apartment in Mangueira I. [Though Eomar is quick to tell the story of how he had to give her his place in cue because the authorities initially said she did not have the necessary documentation to be rehoused there.] 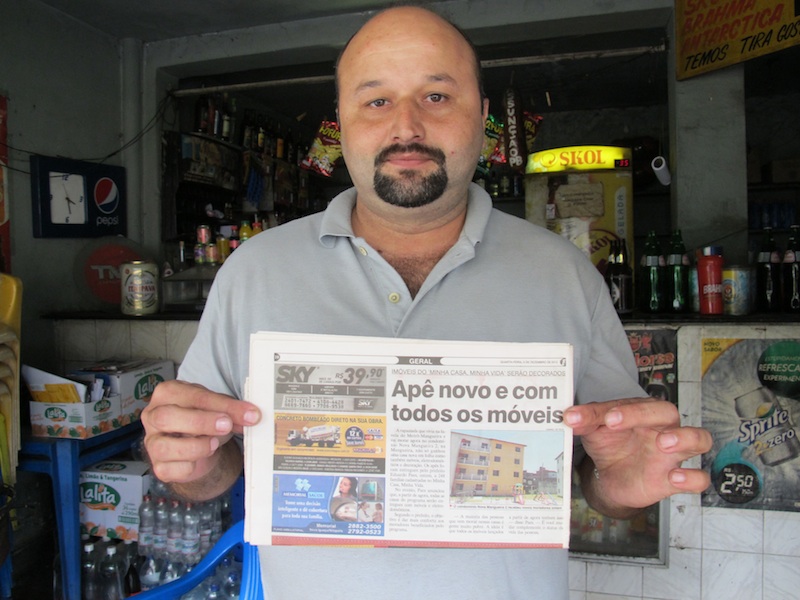 The new apartment came with appliances and Eomar receives official services from the city, which cost approximately twice as much as life in the favela. However, many people like Eomar already had access to such amenities. Eomar explains, in disgust, “I worked hard to have my car…I don’t want hand-outs…The appliances are of extremely low quality, the mattress this thin,” as he pulls his fingers apart a few centimeters. Apart from the significant sentimental value of his old home, his family which once occupied separate levels of their multi-story home, is now spread out in separate apartments across Mangueira I and Mangueira II. And he says the ties he had with his community have been severed. He doesn’t feel safe coming in at night, like he did when he knew all his neighbors. There are people from various eviction zones all living together, few of whom knew each other before. 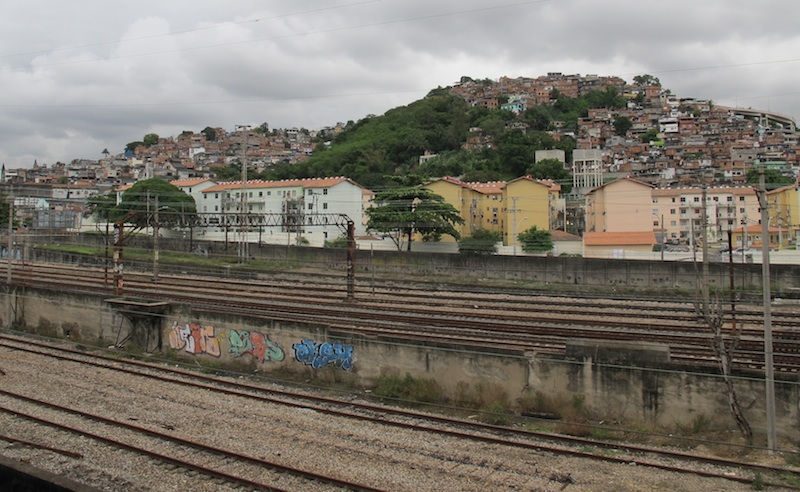 Metrô-Mangueira and the slow, brutal eviction the community has experienced over nearly 2.5 years stands as the most extreme ongoing example of Rio’s practice of evicting and demolishing favelas. No consideration is paid to the extreme psychological trauma of witnessing decades of home- and community-building demolished and left as rubble, the importance of community ties and traditions, or the severe health and security threats of the situation.

Metrô-Mangueira is also a testament to the power of resistance, whereby those who resisted got better outcomes than they would have otherwise, in the end receiving nearby housing. That said, it is widely held that if the initial 107 families had never left, the community united could have fought and won. We have been informed that residents sent in the original group to Cosmos have requested to the City that they be repatriated with their former neighbors nearby, but this option was mocked by the authorities. 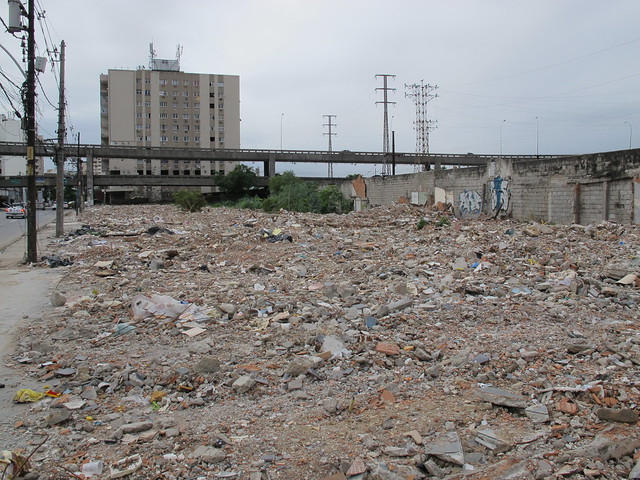