On March 9, 2022, the Institute for Technology and Society of Rio de Janeiro (ITS Rio), in partnership with the Yale Program on Climate Change Communication and Ipec Inteligência, organized an online event to communicate the results of the second edition report Climate Change and Public Perception in Brazil aimed at showing the perceptions of climate change among Brazilians. The event is the second in a series that started last year. It is the result of a joint quantitative analysis realized by the three institutes, comprising 2,600 interviews. 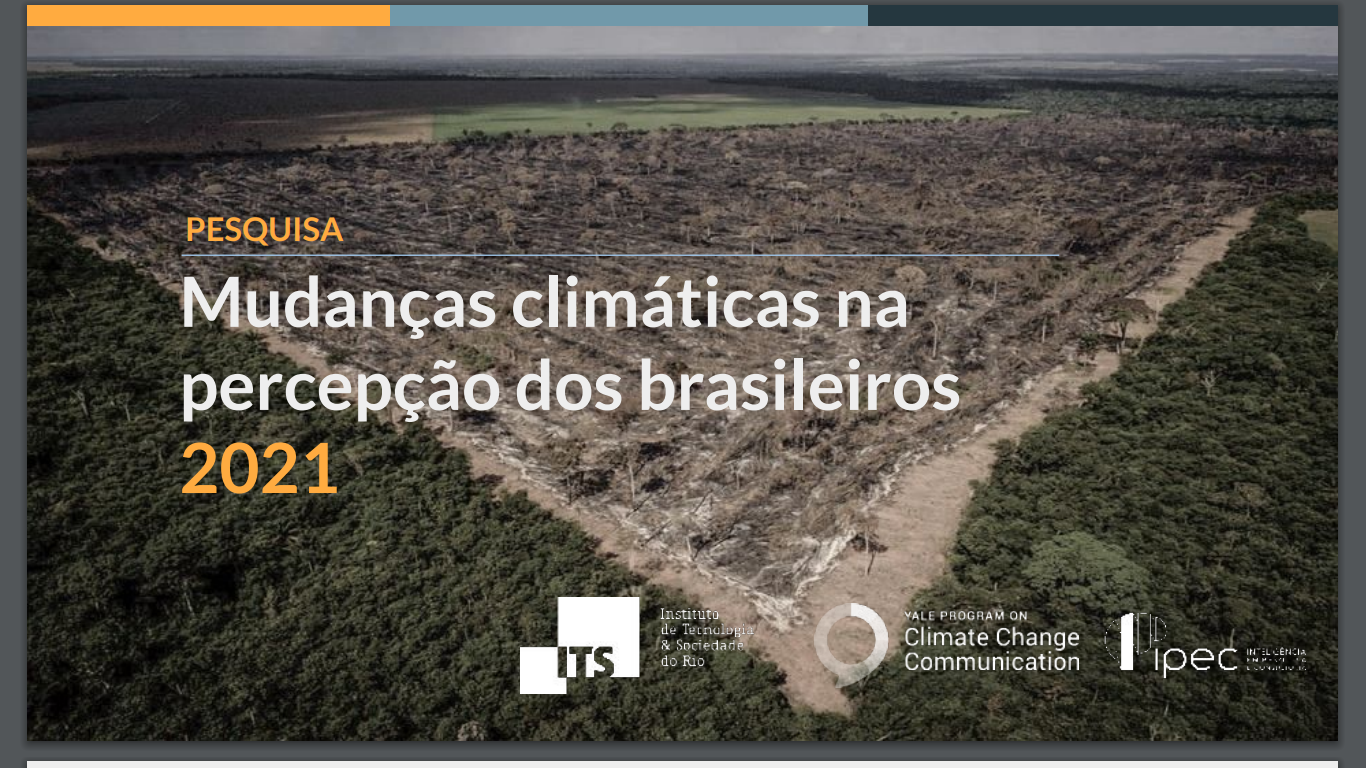 The report shows that 90% of Brazilians are so worried about climate change that they have started taking climate-friendly actions, and want the government to implement greener policies: the public expects officials to include environmental considerations in their political agendas. The expectation is that climate change considerations will have a greater impact on Brazilian elections than it has in the past.

The discussion was moderated by Fabro Steibel, executive director of ITS. The panelists were Rosi Rosendo, director of intelligence and insights at IPEC; Sérgio Abranches, sociologist, writer, and political commentator for Brazil’s national radio network CBN (Central Brazilian News); and Anthony Leiserowitz, director of the Yale Program on Climate Change Communication.  They were invited to present the results, contextualize, and compare them to the climate change perceptions of the citizens of Ireland and the United States.

Rosendo delved in-depth into the data, showing that global warming is a concern among all social classes, educational levels, and political opinions across Brazil. She explained how growing access to digital media has been important to raise awareness on climate change among Brazilians. 66% get information through media and WhatsApp groups. However, despite 81% finding climate change important, only 21% of the interviewees declared having sufficient knowledge on the topic. On this matter, Rosendo presented data on how education, age, and political ideology influence citizens’ levels of awareness. In general, younger, educated left-of-center individuals are more informed on climate change compared to right-of-center respondents.

Among Brazilians, 37% believe that the government should take action against climate change, followed by 32% that think we should rely on the private sector, and 24% who say citizens are responsible. 45% of the interviewees have already voted for politicians based on their proposals for environmental defense. This implies that environmental considerations in political agendas are going to be relevant in upcoming elections.

Next, Abranches reflected on how the results can be contextualized across Brazilian society. He showed how climate change proves to be a catalyst for social fluidity. Abranches stressed:

“Despite Brazilians being aware of climate change, they don’t know much about it. People don’t need to be convinced of climate change. On the contrary, society now needs guidance from its leaders on how to tackle this already-acknowledged problem.”

Though Brazilian society has been historically divided, environmental concerns seem to be evenly spread among all social classes. According to the research, Abranches says, 90% worry about global warming’s impacts on future generations and 77% prefer prioritizing the environment to economic profitability, while only 13% chose the opposite. This view is similar to that of European societies. Inflation, economic stability, and public policies in other areas will still matter, of course, but the environment will be an important consideration for successful candidates across the political spectrum.

Finally, Leiserowitz compares the perceptions on climate change among three different countries: Brazil, Ireland, and the US. According to the data, Brazil appears to be more concerned about climate change compared to the other two countries. For instance, while 96% in Brazil and Ireland believe that climate change is happening, only 76% in the US believe so. Also, 61% of Brazilians are worried about global warming compared to 37% in Ireland and 35% in the US. In Brazil, 75% think they will personally experience the consequences of climate change, compared to 21% in the US and 16% in Ireland.

In light of the results, Leiserowitz argued that climate change concerns are homogeneously spread among the Brazilian population, as opposed to the Irish and US contexts, where climate change concerns follow the polarization of the political system. Leiserowitz also highlighted the Global North-South divide behind the different climate change perceptions. Indeed, the majority of interviewees from the US and Ireland see climate change as something not close to them, whose effects are prominent in other countries of Africa and Latin America. On the other hand, Brazilians on average are more vulnerable to the effects of global warming and, as such, are more concerned in stressing the importance of environmental considerations on the political agenda both nationally and internationally. This difference reflects a pattern of climate injustice, where different populations are unevenly affected by climate change.

In a nutshell, the panelists agreed that climate change considerations are becoming more prominent in Brazilian society at all levels. People have started to take individual actions such as sorting garbage for recycling, adopted by 75% of the Brazilians heard in the study, and consuming less or avoiding using products that are harmful to the environment, as 58% affirmed. Panelists hopefully concluded that future governments of all ideologies will need to adapt to this new demand with the necessary sensibility and speed or they will not govern.