Fórum Grita Baixada‘s 2nd Bulletin on Racism and Violence in the Baixada Fluminense, published in November 2021, brought together accounts and information on the impacts of State violence in the region. The publication reports on the murder of black children and adolescents in Greater Rio de Janeiro’s peripheries, through data sources and testimonies from young people and activists in the Baixada Fluminense region.

According to data collected between 2017 and October 2021 by shootout monitoring platform Fogo Cruzado, 25% of the total number of children shot in Rio’s greater metropolitan area were in the Baixada Fluminense. This was the second-highest number of shooting victims under the age of 12 in Greater Rio during this period. Duque de Caxias, where cousins ​​Emily and Rebecca were killed, had the highest number: there, 11 children were victims of State violence.

“Among the countless unsettling feelings that rouse us in the Baixada Fluminense, perhaps the most alarming issue today is violence. We usually say that the Baixada has been violated as a territory and, in this sense, the narratives contained in this second bulletin make clear: black children and young people are being murdered by a State that should guarantee their safety and lives. Black children and young people are terrified by the violence of a State that kills daily and does not even feel responsible for it,” explains Lorene Maia, a teaching assistant for social inclusion and territorial articulator at the Fórum Grita Baixada who holds a master’s degree in local development and public policy.

“We’ve dealt with a variety of demands that have been created by a lack of public policy—by the failure of this State and its own complicity, whether in criminal practices or unaccountability, for these cases. Racism in all its forms, especially structural racism, is undoubtedly responsible for this environment of executions, exclusion, selectivity, prejudice, and the criminalization of black and poor people,” said Silva.

Adriano de Araújo, executive coordinator of Fórum Grita Baixada, says, “It isn’t by chance or coincidence that most children and adolescents killed by the police are black and from peripheral communities. Public security policies have repeatedly not been aimed at the periphery and favelas, where the population is mostly black. These data substantiate the existence of the racist policies of the State and the police. In [the state of] Rio, our policies are based on confrontation, where the police kill and die the most.”

Araújo also highlights aspects of the Bulletin that draw the most attention. “Society’s widespread discourse is that adult black men ‘couldn’t be doing anything good’ when killed by the police. The deaths of adult men always seem to have some ‘justification.’ But what about the deaths of black children? Were they doing something wrong? They obviously were not in confrontation with the police, but they were also affected by this combative and militarized policy.” 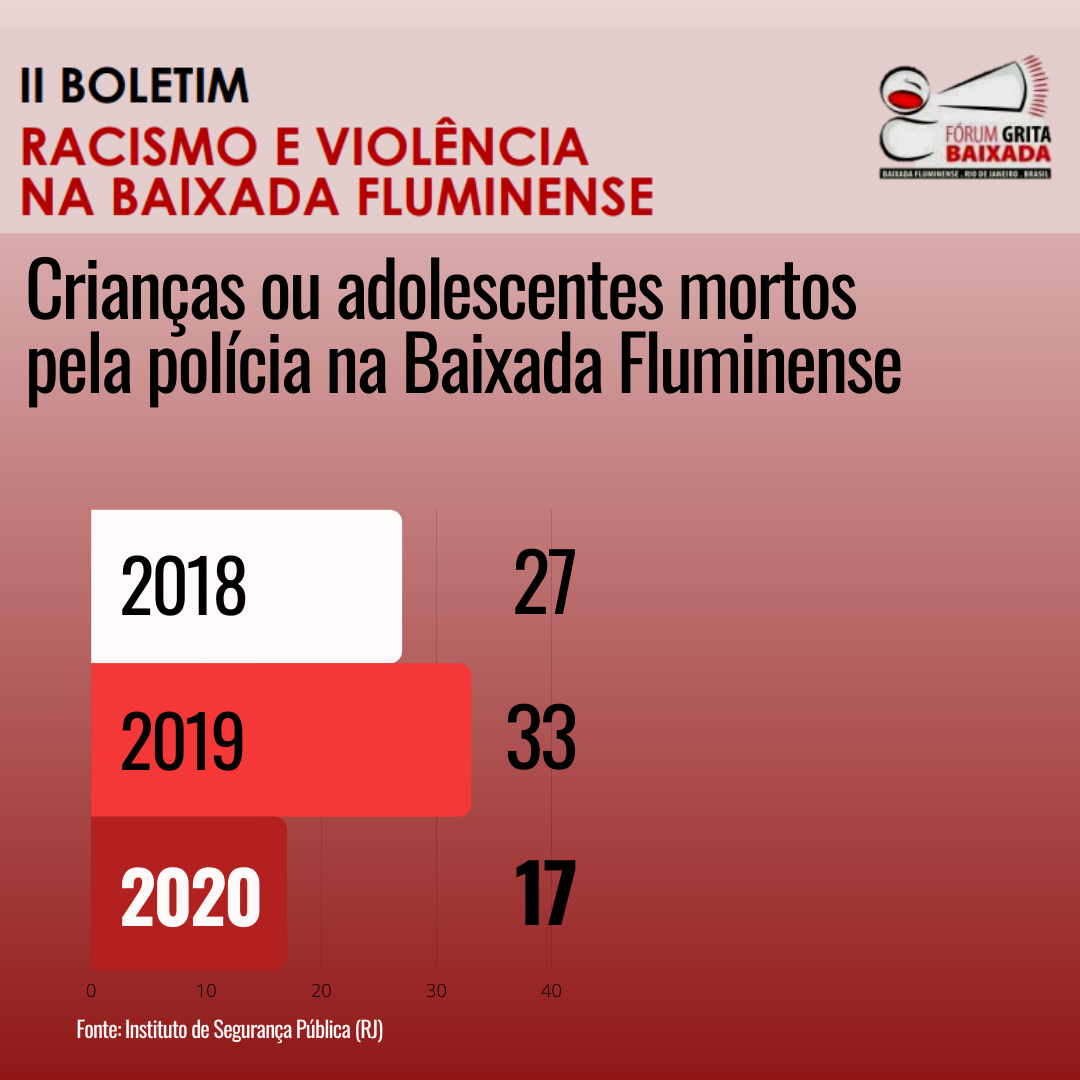 According to data collected by the 2nd Bulletin, 17 children and adolescents, aged between 12 and 17, were killed by police action in 2020 in the Baixada Fluminense alone.

For Maia, constant concerns include inadequate data collection and how accurate data might be incorporated into truly effective public policy in the fight against racism in public security.

“Data on diversity and racial issues, both in our country and in our territory (Baixada Fluminense) will guide the search for the underlying aspects of violence in the three bulletins that the Fórum Grita Baixada will produce. We seek to illustrate the centrality of race in the analyses of the Baixada Fluminense. Issues of race and class must structure all approaches to violence and public security from the perspective of human rights in Brazil. Last year, for example, according to official figures from the Rio de Janeiro Public Security Institute (ISP), the police killed 404 people in Baixada Fluminense. In the first six months of 2021, 255 people were killed by police in this region alone. We must ask ourselves what kind of security we are talking about: a policy that does not protect lives, but simply takes them away,” says Maia. 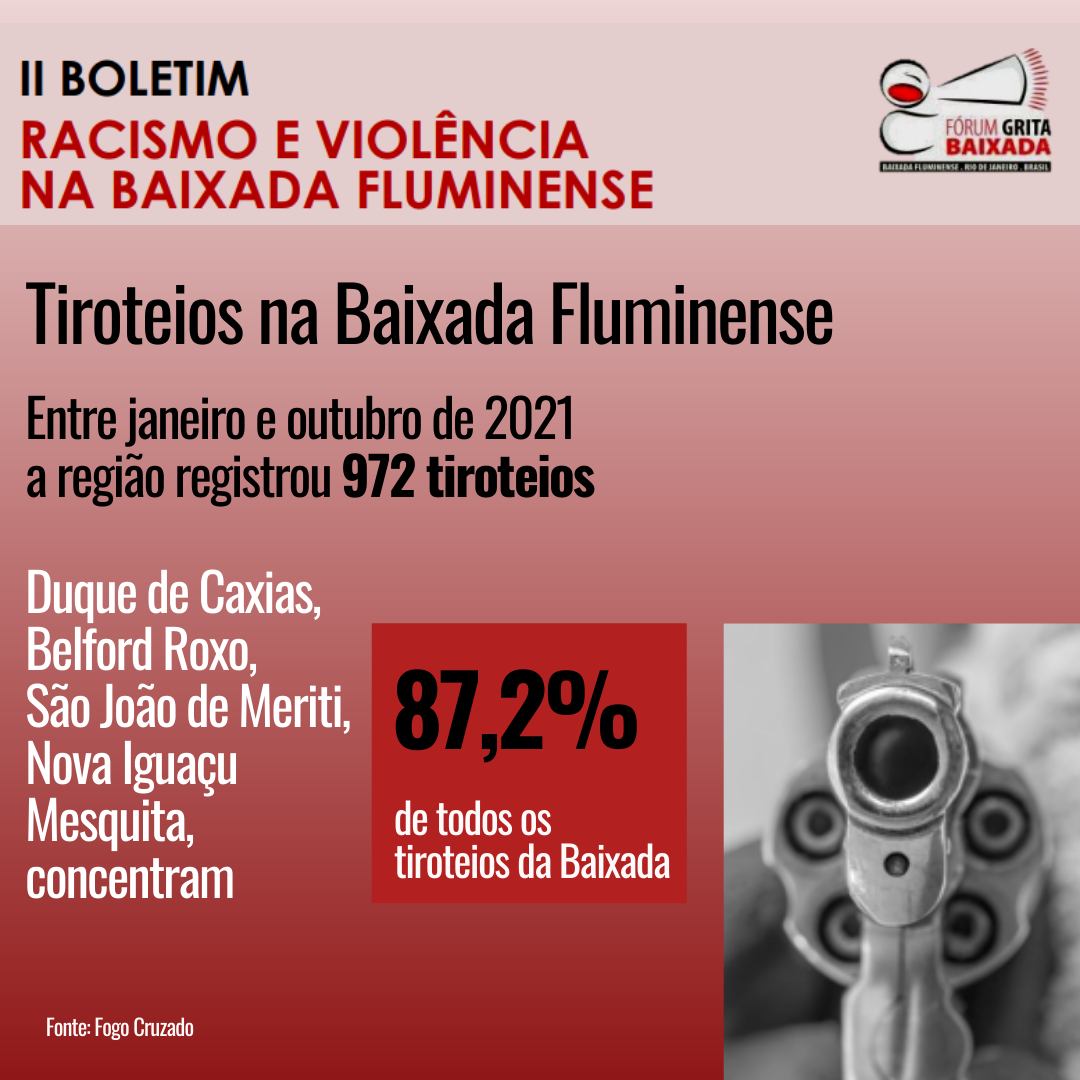 Fórum Grita Baixada has been tracking the information provided by Fogo Cruzado and other data production platforms (such as the Network of Public Security Observatories) with extreme concern. Cities such as Duque de Caxias, Nova Iguaçu, Belford Roxo, São João de Meriti, and Mesquita have seen an increase in shootings. Political-electoral violence has returned to the region with the approach of the elections, alongside ongoing police violence and mass shootings, which are often not even reported by mainstream media. The expansion of militias, which at times join forces with paramilitary groups, civilians, and the drug trade, reflects the complex connections and internal disputes that have increased the number of deaths in Baixada Fluminense.

“For children and teenagers, the racial profile is, unfortunately, always the same. They are black, poor, and live in areas that are often devoid of rights and justice. So, the State makes itself present there through police operations and delivers all the ills of this violent and racist State to these citizens, which it considers second-class,” says Araújo.

Fórum Grita Baixada’s third bulletin will retrieve updated data on police violence throughout 2021. It will continue to discuss, through counternarratives, the perspective of Baixada Fluminense’s population on state violence. A study on forced disappearances conducted alongside the Rural Federal University of Rio de Janeiro (UFRRJ) will also be included in the bulletin: the third report is due out soon. A course on the history of urban and state violence in the Baixada is also being prepared in partnership with UFRRJ, as well as a documentary short film on structural racism and state violence produced by Quiprocó Films, who also produced the award-winning Our Dead Have a Voice.