This English-subtitled video shows the launch day for the sewage treatment biosystem and solar energy system in the small community of Vale Encantado, in Alto da Boa Vista, in Rio de Janeiro. The event brought together 80 people, including Vale Encantado residents, community organizers from other Sustainable Favela Network* communities, public authorities, and journalists. 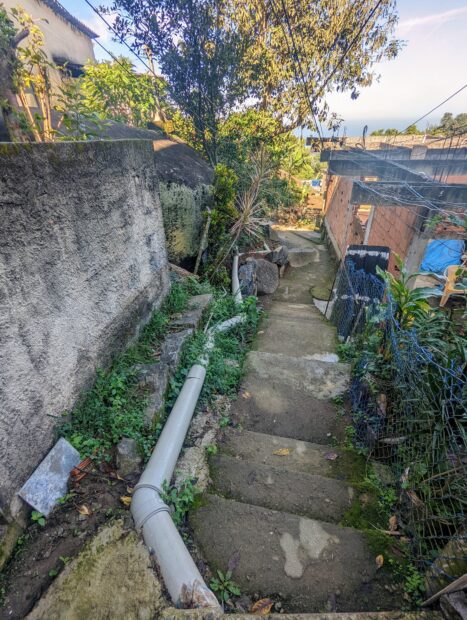 On June 4, an ecological sewage treatment system and a solar system were launched in the favela of Vale Encantado in Rio de Janeiro. The event began with a tour of the biosystem: participants were able to learn more about the collection network set up to serve all 27 homes, connecting their household wastewater to a biodigester. The material in the biodigester is broken down to generate biogas, and the remaining liquid goes through a root zone filtering system.

After seeing how the biosystem works, the next stop was the headquarters of the Vale Encantado Cooperative, which received a solar energy system. Community residents were trained and participated in the installation of the solar panels. The system is integrated with the regular electrical grid, producing clean energy that goes back into the main network to generate savings on electric bills.

The Vale Encantado Cooperative is an organization that creates employment and income for residents through sustainable tourism and local cuisine. Abundant in the region, jackfruit is the most common ingredient in Vale’s recipes, creating traditional Brazilian delicacies such as “coxinha,” “bobó,” and mock codfish fillings. Participants in the day’s activities had the opportunity to taste a few of these dishes.

A laboratory of sustainable practices, Vale Encantado is an inspiration for other communities. The process of building the sanitation and energy systems was recorded in the video Is Rio de Janeiro’s Cleanest Sewage in the Favela?, which was shown during the event. The launch’s press conference led to coverage across Brazilian and global media:

The ecological sanitation system was built in a collaborative effort between several organizations: the Vale Encantado Cooperative, Taboa Engineering, Catalytic Communities, FAPERJ, Viva con Agua, Institute for Climate and Society, and the Environment in Motion Institute. The solar energy system was a joint effort of the Vale Encantado Cooperative, Solarize Training, Catalytic Communities, Institute for Climate and Society, Ecori Solar, and Almax Energy.

The Vale Encantado Cooperative is one of the 120 socio-environmental project members of the Sustainable Favela Network, which organized the launch of the biosystem and solar panels. The Network is made up of community organizers, technical allies, and partner organizations from numerous communities across the Greater Rio metropolitan area. Join today!

Watch the English-Subtitled Video of the Launch Event Here.

*The Sustainable Favela Network and RioOnWatch are both projects of Catalytic Communities (CatComm).