Hunger has returned to Brazil. Approximately 33 million Brazilians are experiencing severe food insecurity according to data from the 2nd National Survey on Food Insecurity in the Context of the Covid-19 Pandemic in Brazil (II Vigisan), released in June by the Brazilian Research Network on Food and Nutrition Sovereignty and Security (Rede Penssan).

During the 1990s, a study by the Institute for Applied Economic Research (Ipea) found that 32 million Brazilians were facing hunger, marking Brazil’s inclusion on the United Nations’ Hunger Map. Collected between November 2021 and April 2022, the new data included in Rede Penssan’s report shows that levels in the country have returned to those of 30 years ago, with over 33 million people—15.5% of the population—experiencing hunger.

The harsh reality expressed in the figures has also been seen in images that circulate on social media and in the media. People in line waiting for donations of animal bones or to buy ox bones and beef scraps at supermarkets are the portrait of a starving nation: typically, these products are used for animal feed. 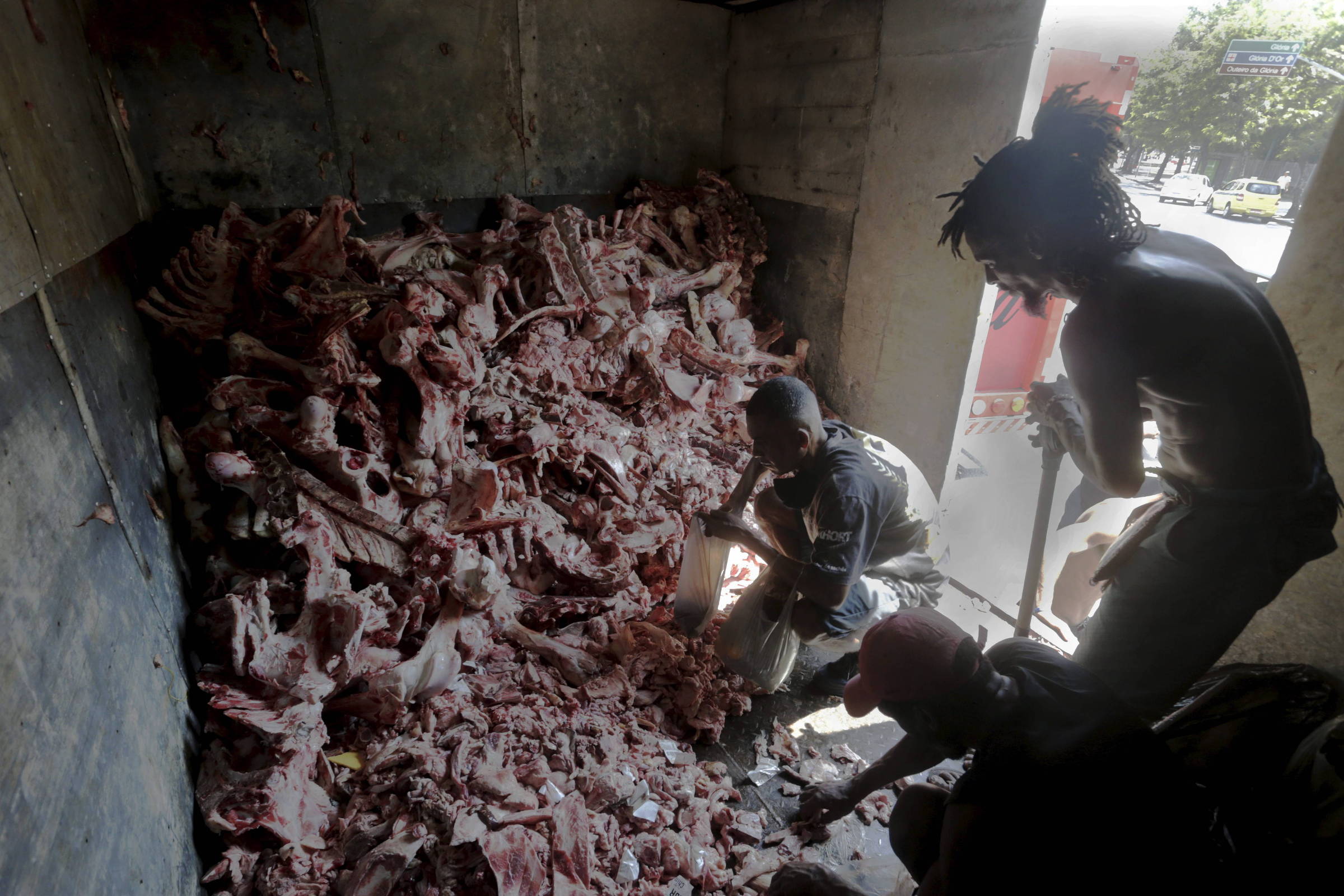 Just four out of ten households have access to food of adequate quality and quantity. That is, only 41.3% Brazilians currently experience food security. The majority, 58.7%, live with some level of food insecurity. This is equivalent to around 125 million people.

Food insecurity is a broader condition than hunger and is not characterized solely by a reduction in the amount of food ingested. For example, families experience food insecurity when they need to replace healthy foods with cheaper, less nutritious ones. This insecurity may be mild, moderate, or severe.

However, as emphasized by Sandra Maria Chaves, a professor at the Federal University of Bahia’s (UFBA) School of Nutrition and vice-coordinator of Rede Penssan, the rise of hunger in Brazil in 2022 is not exclusively a result of the pandemic. In an article published by the Bori Agency and Nexo Public Policies, she draws attention to the results of other national studies that illustrate the rise and fall of food security over the past few years.

According to data from the National Household Sample Survey (PNAD), the country saw food insecurity rates fall gradually between 2004 and 2013, with over 77% of the population experiencing food security in 2013. At the time, only 4% of Brazilians went hungry. The following year, in 2014, Brazil came off the UN Hunger Map. 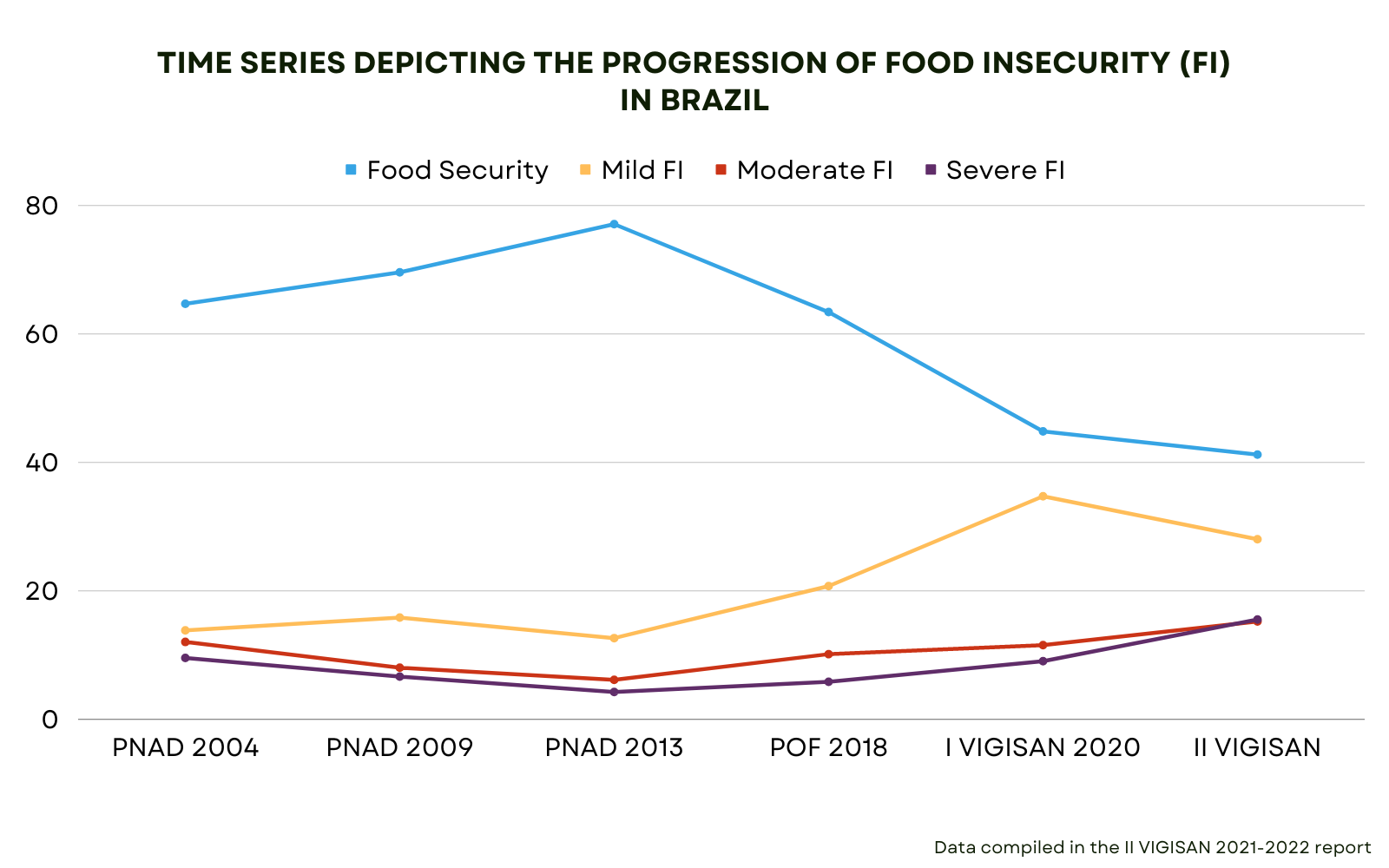 Since that period, the most recent public data on the subject stems from the Brazilian Institute for Geography and Statistics’ (IBGE) 2017-2018 Consumer Expenditure Survey (POF). The survey found that 36.6% of Brazilian households were living with some type of food insecurity—in contrast to 22.9% on the 2013 PNAD. “Therefore, if we analyze the historical progression, we note that the violation of the human right to food has been increasing dramatically since the 2017 survey and has only worsened since,” wrote Chaves.

Although the escalation of hunger in Brazil was exacerbated by the coronavirus pandemic, it is the product of a sum of factors and previous crises. These are analyzed in the II Vigisan report. Factors mentioned include the rise in unemployment, a decrease in income, inflation (particularly of food prices), the weakening of social programs and the dismantling of public policies meant to protect and promote Food and Nutritional Security.

The Face of Hunger in Brazil

In the Brazilian South, 51.8% of residents live with food security: this is above the national average of 41.3%. In addition, the region has the lowest rate of severe food insecurity in the country at 9.9%. At the other extreme of Brazil (and of the graph), the North experiences the worst rates of food insecurity in Brazil. In the North, only 28.4%—approximately three out of every ten residents—live with food security. About a quarter (25.7%) of people in the North are affected by hunger, a percentage much higher than the national average of 15.5%.

From North to South, data show that hunger is more prevalent in the countryside than in the city. Around 35.5% of rural households live with moderate to severe food insecurity. In contrast, this rate drops to 29.9% of families in urban areas. “Among rural households, family farming suffered the impacts of the economic crisis, but has also been particularly affected by the dismantling of public policies aimed at small rural producers,” according to an excerpt from the II Vigisan. 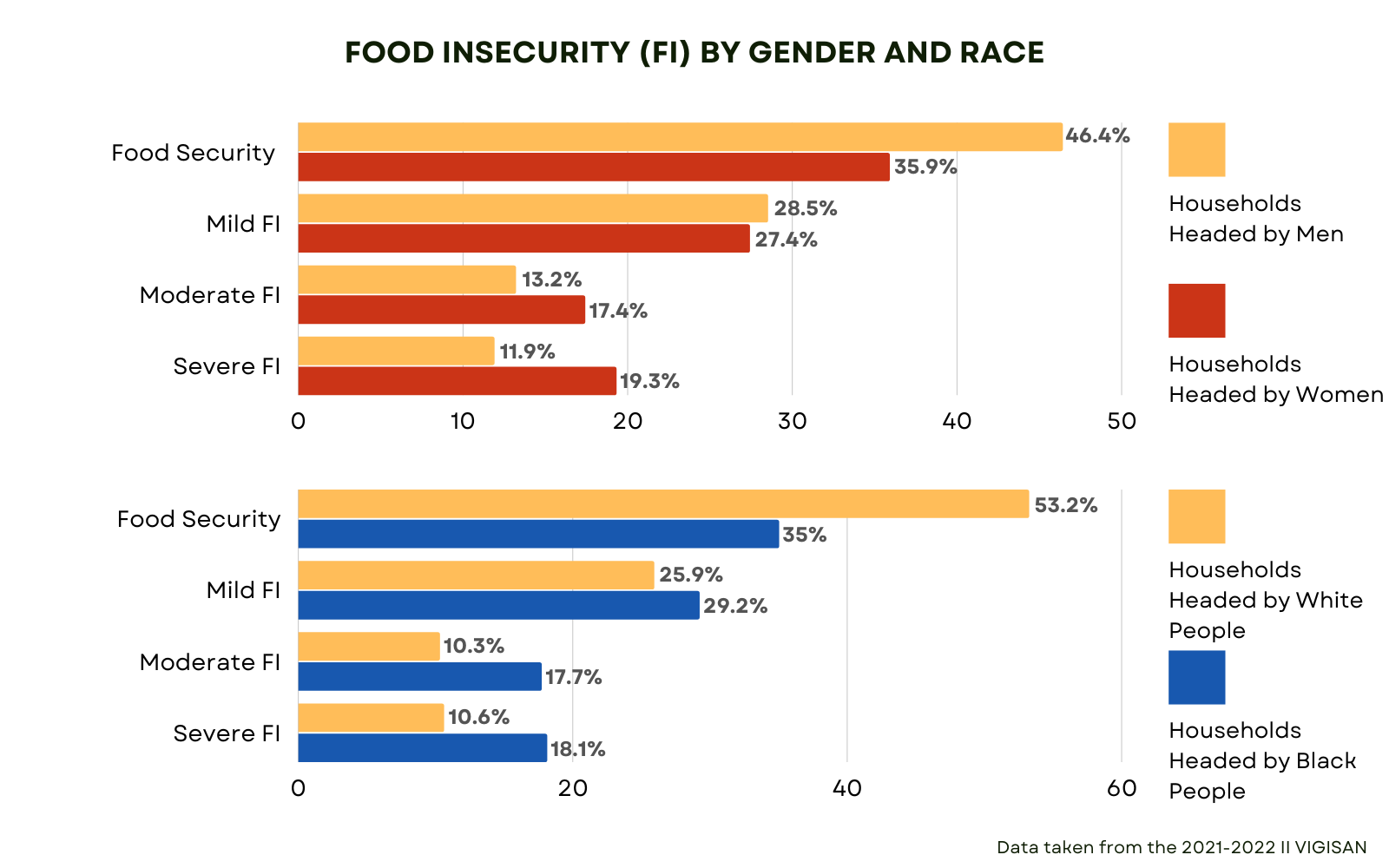 The difference is even more dramatic when taking into account the skin color of different heads of household. As the report mentions, “racism is present in different forms and contexts in Brazil, and does not fail to manifest when analyzing the assurance (or lack thereof) of the human right to sufficient and quality food.” Food security is present in 35% of households headed by black and brown people and 53.2% of households headed by white people. The most extreme forms of food insecurity are present among 35.8% of black and brown families, in contrast to 20.9% of white families.

Food security is related to access to income. Therefore, education and participation in the labor force have a direct impact on access to food. The report shows that food insecurity gradually decreases as the number of years of schooling increases. In Brazil, access to education is structurally unequal between white people and black people. More black and brown children and adolescents drop out of school, for example. On average, white people have more years of education and are the majority in higher education—both in public and private institutions—according to data from the 2018 PNAD.

In the job market, inequality between white people and black people, and between men and women is also glaring. Approximately 12 million Brazilians were unemployed in the first quarter of the year according to data from the Continuous PNAD. Unemployment rates were around 11.1%, although this figure rises to 13.7% among women, in contrast to 9.1% among men. This disparity repeats itself when examining the skin color of the unemployed. Among white people, unemployment stood at around 8.9% compared to 13.3% among black people. The differences between men and women and white people and black people also manifest themselves in the occupation of leadership positions in the workplace and average salaries.

Feelings of shame, sadness and embarrassment over the access to food were reported among 8.2% of people interviewed for the II Vigisan. That means that almost 16 million Brazilians need to adopt strategies that hurt them socially or emotionally to get food. 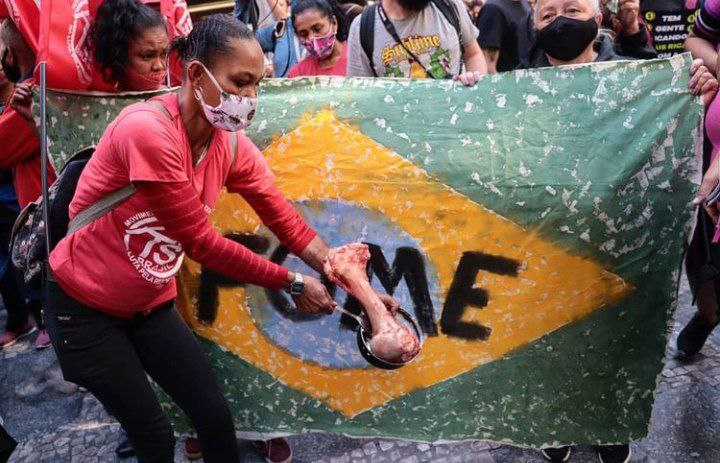 As emphasized by Chaves, adequate food is a human right provided for in the Universal Declaration of Human Rights. This right is also recognized in the Brazilian Constitution, which, following pressure from the general public, included an amendment in 2010 that considers food to be a social right of every Brazilian citizen.

The professor recalled that hunger and food security produce other violations of human rights, such as limits on freedom of choice and the exercise of culture through eating habits. In more extreme cases, as recorded in the report, it also constitutes a violation of human dignity.

A lack of food is the most palpable sign of food insecurity, but it isn’t the only one. The reduction, substitution and even exclusion of certain items from one’s diet also deserve attention. The II Vigisan survey indicates that a majority of Brazilians have reduced or even stopped purchasing basic foodstuffs such as beans, rice, meats, vegetables and fruit. The increase in the prices of these items worsens hunger and the quality of food on the dinner table.

In addition to food insecurity, approximately one in ten Brazilians live with water scarcity, or some level of restriction to access to water. These data were also recorded in the II Vigisan survey. 42% of households confronting water scarcity also deal with moderate-to-severe food insecurity. This means that, in addition to living with hunger, many Brazilians also face thirst.