This is the final in a series of four articles about the “Degradation of the Pantanal Carioca,” as Rio de Janeiro’s West Zone wetlands were once known.

With a R$7.29 billion (US$1.36 billion) offer, in April 2021, the Iguá consortium won the bid for 35 years of management of CEDAE’s (Rio’s recently privatized water and sewerage public utility) block 2—which consists of Rio’s Planning Area 4 (AP4), as well as the Miguel Pereira and Paty Alferes municipalities in the Center-South of the state. In August of the same year, Iguá signed the contract. They started full operation of the water and sewerage services in February 2022.

During the ceremony to celebrate the start of operations, the company’s CEO Carlos Brandão said that in the next three years, the utility provider will receive a R$681 million (US$127.18 million) investment, with R$250 million (US$46.69 million) for dredging and cleaning the lagoon complex, R$126 million (US$23.53 million) for implementing dry weather pumping stations, and R$305 million (US$57 million) for water and sewerage systems in irregular, non-urbanized areas.

One of the concession’s contractual commitments is an investment of R$2 billion (US$373.5 million), with R$250 million (US$46.7 million) for the depollution of the Jacarepaguá Lagoon Complex within three years. In 12 years, the utility provider will have to increase the percentage of treated sewage in the Baixada de Jacarepaguá from 67% to 90%, and increase the water supply from 94.5% to 99%. Improvements must also be made to over 100 water and sewerage stations in the region and the Barra Sewage Treatment Center.

On July 3, a collective cleaning action by the Iguá utility provider and the SOS Lagoons movement removed over 420kg of trash from the Jacarepaguá Lagoon. Fifteen local fishermen took part and 281kg of the solid waste removed went to a recycling cooperative. The action meant that over 60% of the plastic that would otherwise have polluted the Pombeba Island shores went to a different destination.

During the event, fishermen also watched a presentation about waste disposal and the ways it can be reused. According to Iguá, over 120 tons of solid waste have been removed from the shores of the Camorim Lagoon in the first four months of the utility provider’s operation.

In a press release on the concession’s first 100 days of full operation, Iguá informed that over 45 tons of trash had already been collected, and explained how the installation of a dry weather sewage intake (DWSI) system and expansion of the water system in irregular areas will be carried out:

“In up to five years, following the environmental licensing, the forecast is that 50 catchment points and approximately 40km of DWSIs will be installed to intercept 676 liters of natural sewage per second, which are currently being dumped into five sub-basins and one micro basin in the region, leading to the Barra Sewage Treatment Center. There are important rivers within the tributaries that compose these sub and micro basins, such as the Arroio Fundo, Muzema, Anil, Guerenguê, Rio das Pedras, Rio Grande and the Taxas Channel (Lagoinha). In addition to the DWSIs, the utility provider will install 28 pumping stations responsible for the flow up to the Barra Sewage Treatment Center. This project—estimated at R$126 million (US$23.53 million)—will directly benefit 200,000 residents in 69 communities around these water bodies, and will help protect 30 rivers in the region and their tributaries.”

Regarding the procedure adopted by Iguá aiming to depollute the lagoon complex, Adacto Ottoni—Public Health PhD and professor in the Sanitation and Environmental Engineering Department at the State University of Rio de Janeiro (DESMA/FEN/UERJ)—explained that an initial controlled dredging is necessary:

“Controlled dredging must be carried out to specifically remove sludge, trash, sewage sludge and physical sediments. This is what Iguá will do with these R$250 million (US$46.69 million). No river should be dredged before this is done. If so, this sewage will contaminate the Barra and Macumba beaches, as these lagoons are full of sewage and trash. By solving the sewage problem, say in five years, we will begin to see positive effects on water quality. And only then should a wider dredging be carried out, connecting not just the Joatinga Channel but also the rich circulation of the Sernambetiba Channel through the Taxas Channel, encompassing the Marapendi Lagoon from the Portela and Cortado channels that will also reach the Jacarepaguá Lagoon. With this we will have a system by which sea water enters through the Joatinga Channel, circulates through the entire lagoon system, and leaves through the Sernambetiba Channel without risk of contaminating the beach. I have no doubt that these lagoons will become an ecological paradise.”

How Can We Recover the Jacarepaguá Lagoon Complex? 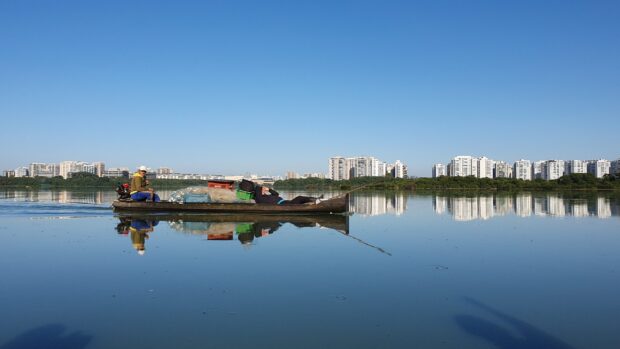 Besides professor Adacto Ottoni, we also sought views from two other technical specialists about how the recovery of the Jacarepaguá Lagoon Complex take place. For activist Sérgio Ricardo de Lima from the Living Bay Movement, the depollution, not only of the Jacarepaguá Lagoon Complex, but also of other water bodies in the city, will occur when the Rio de Janeiro municipal government enacts the Municipal Sanitation Plan:

“The legislation has provided for rainwater not to be mixed with sewage since the 1990s. So, when discussing the concept of environmental sanitation, we are also discussing sewage treatment, trash collection and urban drainage systems. Every Brazilian municipality has the duty to carry this out.”

For Adacto Ottoni, the process of recovery occurs in three stages. The first consists of solving the sewage problem by installing dry weather sewage intake systems (DWSIs) in the favelas and implementing environmental education programs linked to separating waste for collection and recycling with income generation. In the second stage, dredging is necessary so that dissolved oxygen from the sea can enter the lagoons without salinization. And, in the third stage, a sewage treatment station should be installed in Barra da Tijuca, which reuses the sludge collected in the lagoons:

“Sludge that is retained will be put into a biodigester to generate anaerobic decomposition. With this, we will have methane, which is a combustible gas. These days, with this energy crisis, we will be able to generate gas for cooking and transportation, for example. We can also use the process of sewage biodegradation to make organic compost and use it for reforestation, as water utility Cedae does with its bed of seedlings… Now who must be present in all of this? The environmental agency.”

Ottoni said he has already taken the suggestion to create biodigesters inside the treatment station to the Public Prosecutors’ Office, Iguá, and other agencies. According to him, the current process is very costly and does not generate sustainable solutions, as the sludge needs to be taken out of the sewage and then transported to a landfill. Ottoni also noted that the sustainable process could turn into a tourist attraction and pointed out that there is a lack of sustainable solutions being generated:

“Sometimes, the utility provider wants to spend as little as possible, but [the sustainable process] would also generate a benefit. In my view these sustainable solutions are missing. This will also bring in money, tourists love these kinds of solutions. The Barra sewage treatment station could turn into a tourist attraction, as tourists like to see these kinds of processes.” 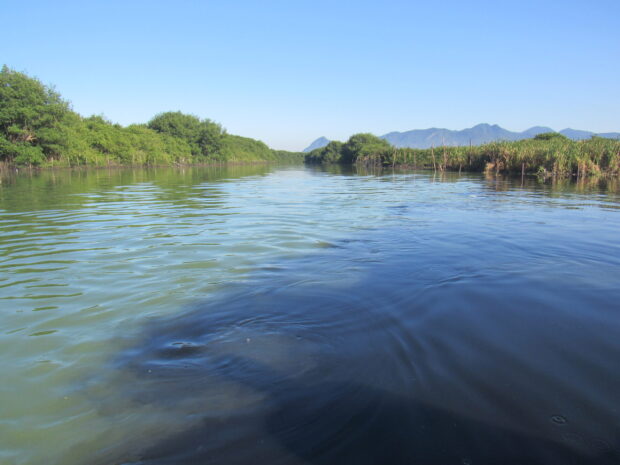 Even with a lot of trash, sludge and sewage, there is still life in the rivers and the four lagoons that form the Jacarepaguá Lagoon Complex. While navigating the waters of the “Pantanal Carioca” that were once clean and just as Magalhães Corrêa reported almost 100 years ago, it’s possible to see capybaras, alligators, herons, numerous species of birds and fish. The pollution in the lagoons and the environmental impacts demonstrates how environmental racism jeopardizes the livelihoods of fishermen—who have been fishing in the region for centuries. In Rio das Pedras—a favela formed by a majority population of Northeastern Brazilian origin—squeezed between rivers and lagoons, residents watch their homes being constantly invaded by sewage and pollution. And if there’s no climate justice, the tendency is that this state of things will get worse.

This is the final in a series of four articles about the “Degradation of the Pantanal Carioca,” as Baixada de Jacarepaguá, in Rio de Janeiro’s West Zone, was once known.