For the original article by Jason Castro in Portuguese published on the Autódromo de Jacarepaguá blog click here. 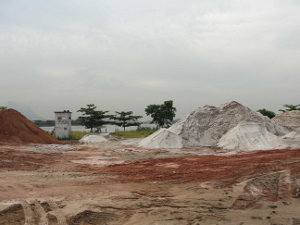 After the tragedy in the mountain region, many have spoken about the impact that illegal occupation of the slopes has had on the natural environment. As always, the blame has fallen on the weakest: the poor.

But it’s not just low income individuals who have disregarded laws and, for lack of other options, occupied these areas. With disrespect for the environmental legislation which states that mangroves ought to be preserved, the government has already dug up a significant protective strip around Lake Jacarepaguá, as the photos show. If the government had obeyed the law, any intervention in this area would have been preceded by an Environmental Impact Study followed by an Environmental Impact Report.

Yet this same government is requiring that the nearby community of Vila Autódromo be removed because it is located in an environmental protection area. Are there two sets of weights and measures? Or is this yet another case in which the laws only apply to the poor…

And the racetrack? There is no excuse for its announced destruction. Under the principle that everything is negotiable, the government wants to destroy what has already been built in order to turn the land over to developers.

It is an unconscionable hypocrisy that this should happen so close to Lake Jacarepaguá. Despite the pollution there, some species still reside there and will be expelled by the noise and pollution generated by the destruction of Vila Autódromo. Nothing could be more anti-ecological in this era of global warming. 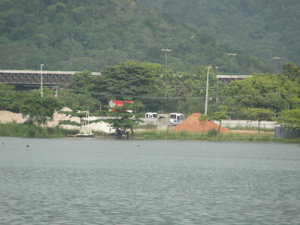 A seminar held in 2010 in São Paulo on the likely impact of the upcoming sporting events (Brazil will host the World Cup in 2014 and the Olympics in 2016) noted that they will create a “state of exception” under which Brazilians’ quality of life, particularly that of the poorest, will become significantly worse. According to professor Carlos Vainer of the Federal University of Rio de Janeiro, laws will be suspended so businesses can prosper in this “city of exception” under conditions of “flexibility” and “special norms.” In this situation, according to Vainer, “there will be no political parties, no representative democracy, no parliament” — only PPPs (Public-Private Partnerships) which are simply “the direct dictatorship of national and international capital.”

As you can see, here in Rio this process has long since begun. This week the City Council approved the new master plan for the municipality which basically ends the region’s current plan. As far as councilman Eliomar Coelho is concerned, the new plan is a farce.

What the people of Rio de Janeiro need to decide is whether hosting these sporting events is worth the sacrifice.