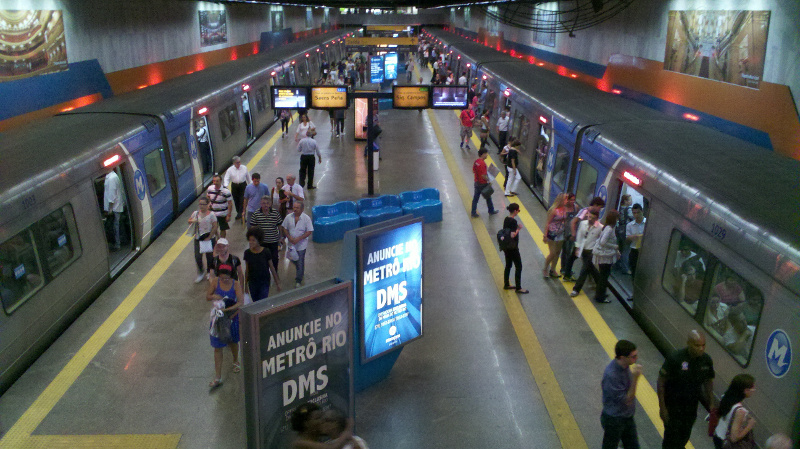 After announcing the “Estação Patrocinada” (“Sponsored Station”) project, Metrô Rio, the management company for Rio de Janeiro’s metro system, has gone back on its plans to sell the names of the city’s metro stations, which would have been associated with the names of private companies. On May 16, Rio State Governor Sérgio Cabral vetoed the proposal, which according to the press, had been devised by (Brazilian billionaire) Eike Batista’s company IMX. Metrô Rio’s website has already removed all content related to the project.

In a statement, a spokesperson for the concessionaire stated that “the Sponsored Station project does not completely change the name of stations, but it allows commercial adoption of each one. We want to highlight that the extra revenue is put into improving the comfort for users and the environment in the stations, as stated in the concession agreement.” They went on to say that “Sponsors will commit to offering additional services for users in these stations. […] As such, waiting areas, wi-fi facilities, cultural activities and exhibitions will be installed.” Now it appears that the only thing that’s been abandoned is the possibility of associating a company name to the station.

This possibility has indeed surprised many. Apparently, not even the Governor held fast. It is worth remembering however, that since the end of 2011, SuperVia, the private company which manages the suburban train network and the Complexo do Alemão cable car, has also had a similar initiative. Of the six cable car stations, two have already had their names “sold”: Alemão-Kibon (Unilver-owned ice cream producer which uses the same Heartbrand logo as Wall’s) and Bonsucesso-Tim (Brazilian mobile phone service provider). But the fact is, we are talking about a public good here. In having financial support from outside business, the metro, trains and cable cars are no less part of the public sphere. The concessionaires are not the “owners” of the stations, or the trains…

Catapulted by the international boom of its image, Rio de Janeiro is undergoing an intense transformation process. If on the one hand, the whole of Brazil is happy to see the positive momentum passing through the city, with job creation, generation of opportunities and an improved self-esteem among Cariocas (Rio residents), on the other, the commercial interests and privatizing savagery is frightening. What is the limit to commercializing the city and its attributes? Up to what point can marketing take charge of the city and override the people and processes which build it?

After the real estate frenzy (that has driven many residents out of the South Zone and central area), after the transferral of so many resources to private companies in the Porto Maravilha public-private partnership, the forced evictions from favelas, the metaphor of the processes underway in the express city in Monopoly: The Olympic City Edition (produced by Estrela with some city government support), to sell the names of metro stations almost seems normal… Ultimately, if this is the case, will the next step be selling the local people themselves?

Update: I recently learned that the Rio city government had to recall units of Monopoly: The Olympic City Edition which had been distributed in municipal public schools and that the Public Ministry for Rio de Janeiro has initiated an inquiry into the contract with Estrela.