Reporting on Rio’s complex and varying favelas is no easy task. Given the long history of marginalization and stigmatization of favelas, the words and images used to portray these communities really matter. As a journalist, your words may inadvertently reinforce the logic behind policies of forced evictions or police occupations. Alternatively, the topics you highlight and the people you quote may challenge negative perceptions and alleviate some of the discrimination residents face in their daily lives.

Read RioOnWatch’s policy on reporting and working with journalists here.

Building on the years we’ve worked with favelas, starting in 2000, as well as seven years of reporting on them and supporting hundreds of domestic and international journalists’ reporting, we’ve put together a short list of best practices for journalists.

Not only do the words “slum,” “shantytown,” “ghetto,” and “squatter settlement” carry a whole lot of negative assumptions for most readers, they are simply not accurate descriptions of favelas (see definitions here). Check out this well-argued case for retiring the word “slum” (but note that we disagree with the author’s argument for avoiding the word “favela”—there is nothing inherently negative about this local term, which favela organizers increasingly associate with a sense of community pride). Instead of “slum” or “shantytown” or similar words: 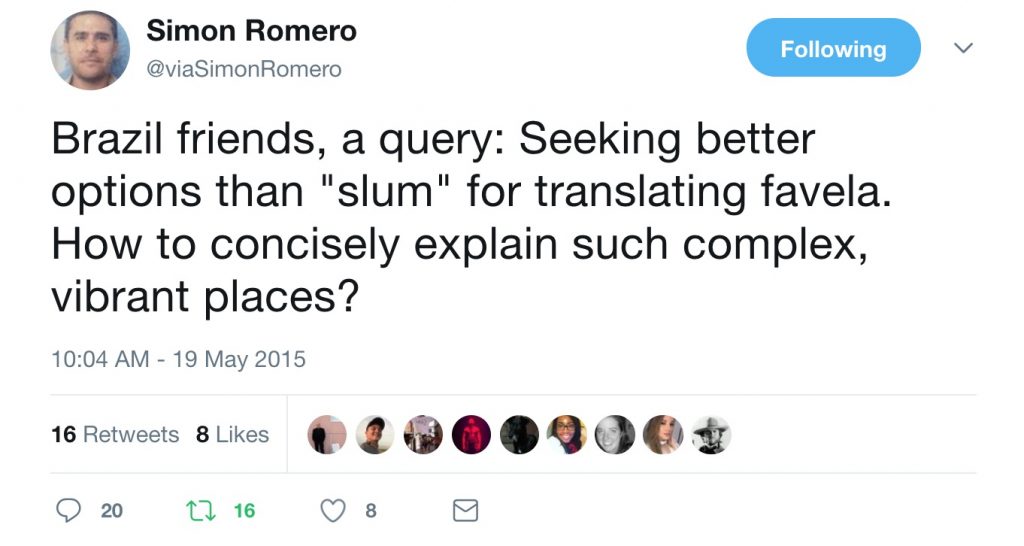 Too many articles fall back on lazy expressions like “no-go zones” to describe favelas, even though they are clearly “go zones” for the roughly 1.5 million Rio residents who live in them. CNN once reported that “under the cover of darkness” its team “ventured into a favela,” a bizarre way to portray a community that residents, visitors, and other journalists enter safely in daylight. These depictions appear to reflect the journalists’ preconceptions more than they reflect the experiences of most people encountering a favela. See our Best and Worst Reporting series for further examples, and do review your language to weed out the dramatizations.

According to our 2016 research report on favela reporting by eight international outlets, the majority of international articles that mention favelas still focus on fundamentally negative issues—violence, gangs, drugs, poverty—at the expense of examining housing, community initiatives, culture, activism and a variety of other topics that are begging for greater coverage, and which can provide insight to debates on the same issues in the newspaper’s home country. Your individual article on police violence may be important and nuanced, but if nearly every article about favelas is about violence, readers are left with a skewed impression of life in favelas. Take a moment to consider how your work will fit in with other media produced about favelas, and the ultimate impact this will have on the communities you write about.

One fantastic result of the World Cup and Olympics was that, in the build-up to these events, favela residents themselves were featured more than ever in mainstream international news. Still, a number of articles about favelas reported from the perspective of the journalist without including resident perspectives, while other articles asked for athletes or celebrities’ opinions of favelas they barely visited. Clearly, prioritizing the voices of the people who know favelas best is essential to accurate reporting. Email press@catcomm.org for community contact suggestions.

Favela journalists know their communities inside and out and can offer fresh perspectives. Check out The Guardian‘s series featuring three favela journalists’ diary accounts of the pre-Olympic year or Americas Quarterly‘s collaborative piece with community reporters. And don’t miss our 2017 comparative report on global media portrayals of favelas, which highlights stark differences between reporting by favela journalists and that of foreign journalists.