If hills could speak, Morro do Tuiuti (Tuiuti Hill) would have a lot to say. It has borne witness to many of Rio de Janeiro’s key physical and social transformations over more than two hundred years.

When the Portuguese royal family–in flight from Napoleon’s invading army–docked in Rio in 1808 the city was transformed, almost overnight, from sleepy colonial backwater into imperial metropolis. The new seat of power became the royal Palácio de São Cristóvão, in the Quinta da Boa Vista, a stone’s throw from Morro do Tuiuti. Popularly known as the ‘Versailles of the Tropics,’ the palace originally lay outside the city limits. However, gradual urban expansion, accelerated by the opening of a train line in 1858 and a new bonde (tram) system in 1870, brought it into the city proper. The aristocratic character of that settlement process is still visible in the faded opulence of much of the neighborhood’s architecture. 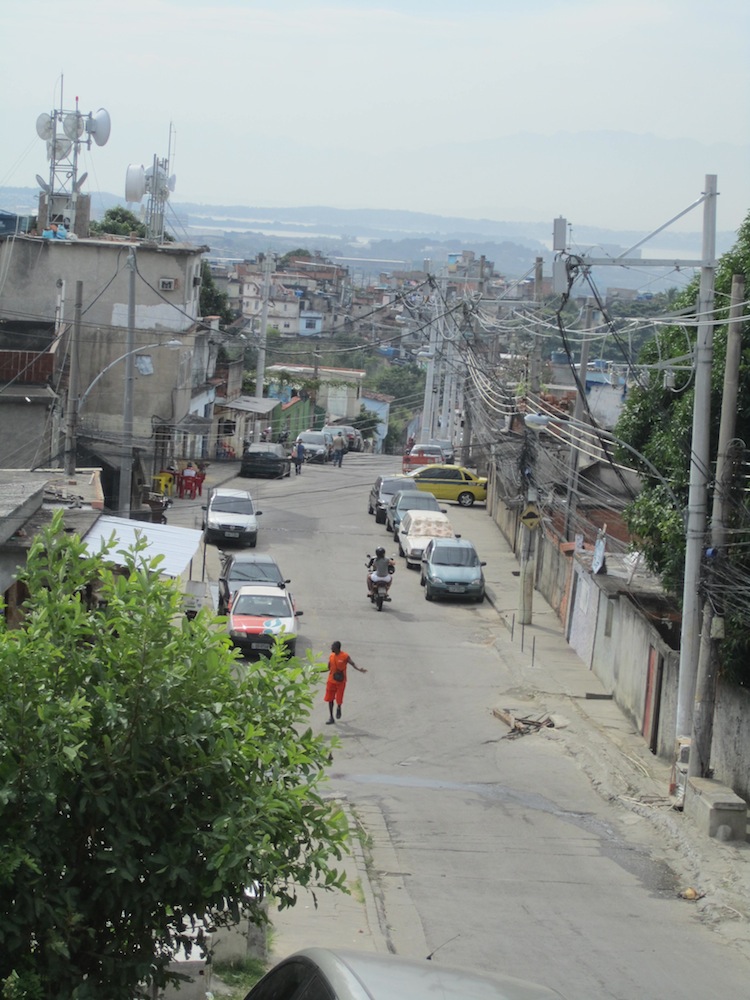 Curiosity led Gleice Valadares, born and raised in Tuiuti favela, to delve into the city archives to uncover the history of the hill. She discovered an old map showing a reservoir at the far end of the hill and a road running alongside Tuiuti that connected it to São Cristóvão. It must have been the water source for the surrounding area and presumably the Palace itself. “The hill’s a part of local history, but no one connects this to the history of the hill,” says Gleice. From childhood she also remembers a large old mansion on the hill, which was left to deteriorate and was eventually taken down. She believes it must have been from the same era, but there seems to be no record of what it was used for. “Those of us who are here… who are a part of this history, could have worked to preserve it a bit better. But we (in Brasil) have a serious problem with memory, of recording memory.”

In imperial Rio aristocratic decadence mixed in brutal oppression in the form of domestic slavery. However, with abolition in 1888 and the creation of the Republic in the following year, inequality took a different form. Former slaves and poor migrants crammed into cortiços (slum tenements), which became notorious as dens of poverty and Yellow Fever. In the first decade of the twentieth century growing elite concern about public health culminated in the urban reforms of Mayor Pereira Passos. The cortiços were destroyed and replaced by the grand boulevards, plazas and buildings that structure central Rio today. Informal settlement of the Morro do Tuiuti began around this time and although there is no written record of who first occupied the hill, local accounts have it that it was the poor construction workers who rebuilt the city. 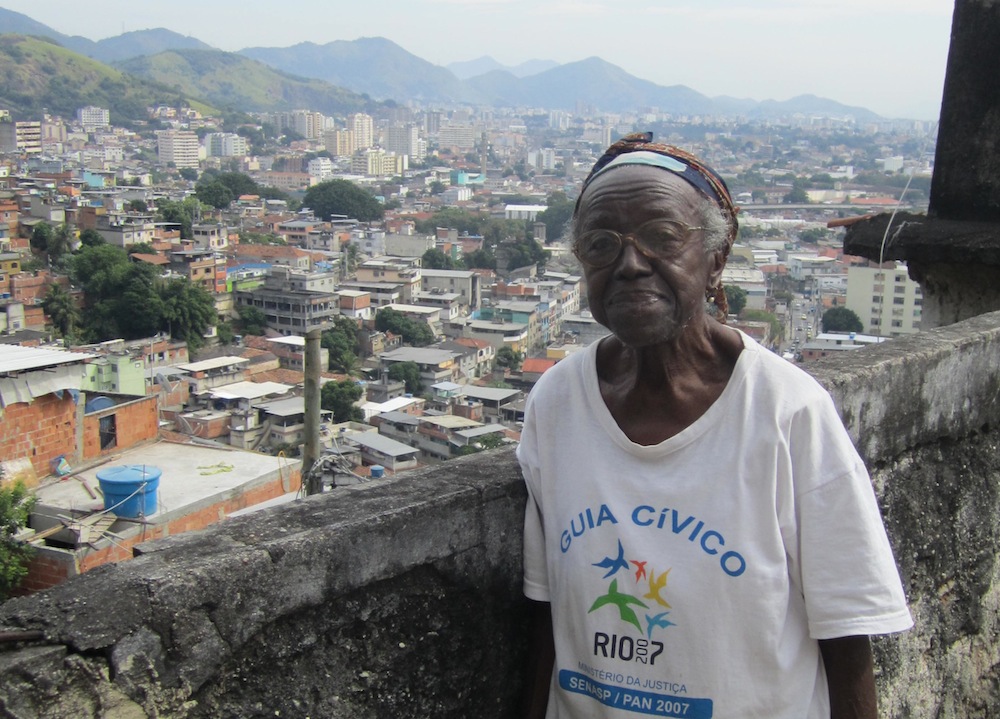 It was not long after this that Dona Margarida arrived on the hill. At 97, she is a living record of the changes it has seen. “I arrived here from Minas Gerais with my mother when I was 7 years old.” The year was 1923. “At the time there was nothing here, only grass and some shacks.” Just a few years later Dona Margarida went to work as a babá (nanny) in the house of a middle-class family in Lapa, traveling to work on the long-since vanished bonde. She liked the job as she was well treated by her employers and because it allowed her to travel around Rio and get to know the city center and the South Zone. “Rio had fewer streets, less conditions,” she recalls, “it was dangerous, but not as much as today.” It was already an exciting place. During the 1920s and 30s samba was beginning to flourish and she remembers attending samba parties on neighboring Mangueira hill, hearing legendary musicians like Cartola and Jamelão.

Industry and the housing question

As early as the 1890s, following the overthrow of the monarchy, São Cristóvão had begun to lose its aristocratic feel. Wealthy Cariocas were opting for the coastal neighborhoods of the South Zone. Instead, with its good transport connections, sturdy buildings and proximity to the port, São Cristóvão became the obvious location for Rio’s emerging industrial sector. As innumerable factories and workshops sprang up, the ‘Bairro Imperial’ (‘Imperial Neighborhood’) became the ‘Bairro Industrial’. Tuiuti’s residents benefitted from the abundance of employment opportunities and when she was in her twenties Dona Margarida went to work in a drinks factory. “I stacked the cachaça bottles day and night, but never drank a thing,” she laughs. It was hard work, but it was stable and paid enough to live on. She spent most of her working life with the same company. 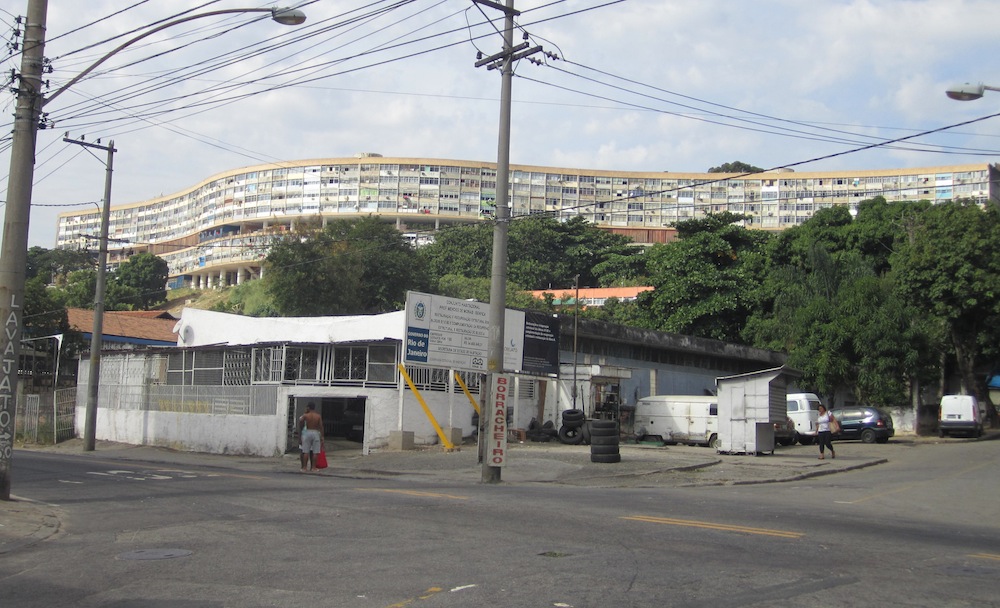 Rio’s industrialization and the inward migration it attracted drove huge population growth between the 1940s and 60s, producing a serious housing crisis. At the start of this process a brief but ambitious house-building program left its mark on the Morro do Tuiuti when the Minhocão (‘big worm’) housing project was built to house low-income public functionaries in 1946. Designed by renowned architect Affonso Reidy and including a school and leisure facilities, it is widely regarded as the high watermark of public housing provision in the 20th century. Two decades later, as the crisis rumbled on, Brazil’s military regime adopted a new approach to the housing question. Central areas were to be freed up for land-value capture through a brutal favela removal campaign. Tuiuti was spared thanks to São Cristóvão’s cheap land and consolidation as an industrial hub. Across the train tracks, in wealthier Tijuca, Favela do Esqueleto was not so lucky. It was removed to make way for UERJ (Rio’s State University).

The long-standing economic stability of the area, which had protected it from the upheaval inflicted on other parts of the city, was shattered in the early 1980s as Brazil entered a period of prolonged economic crisis. Many of Tuiuti’s residents lost their industrial and public sector jobs and moved into less secure service work or the informal sector. In this context of economic hardship and high unemployment, a new problem reared its head. Tuiuti was pulled into a citywide dynamic of territorial conflict involving competing drug-trafficking gangs and a military-style police force. “We suffered tremendously,” says Gleice, who grew up during this era. As in other favelas, residents had to live with the dominance of drug traffickers, periodic police incursions and ongoing violence. 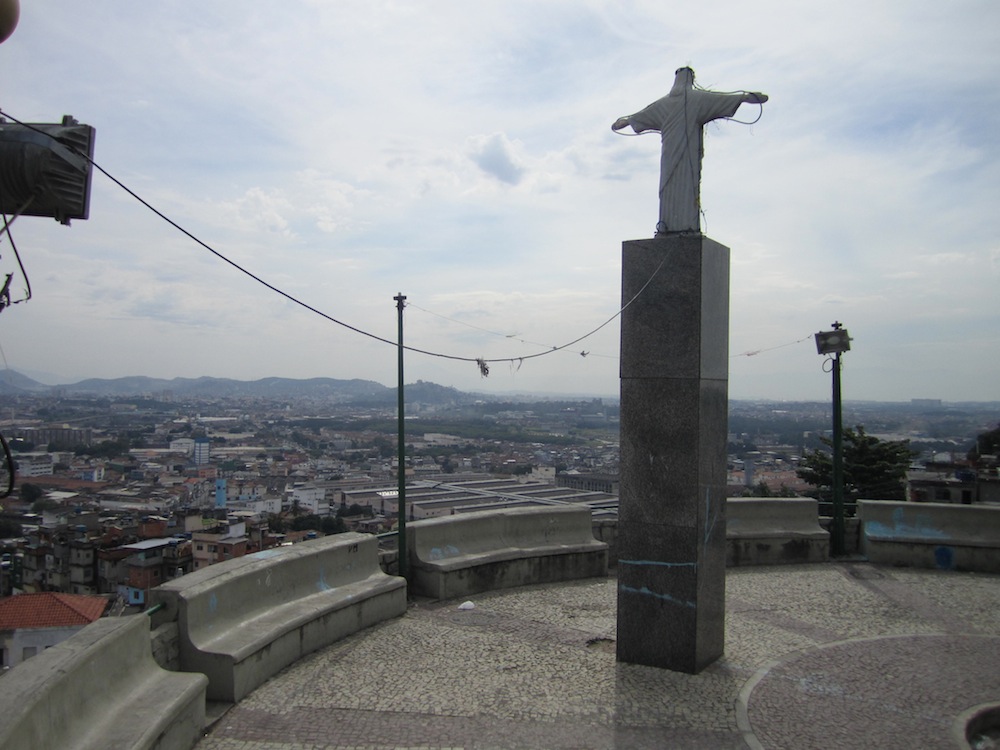 But despite the economic and social turmoil of the era, the quality of housing in Tuiuti had become unrecognizable from the precarious wooden barracos of Dona Margarida’s childhood. Successive generations had painstakingly improved and expanded their homes, first rebuilding them with bricks, then adding additional floors. The favela’s upgrading was completed with the belated arrival of the state in the 1990s, bringing paved roads, drainage systems and landscaped public spaces. To this day residents call the central area of Tuiuti, with its terrace offering spectacular views over Rio’s North Zone (see photo), ‘Favela Bairro’ after the government program that built it.

As ever, Tuiuti today is at the heart of the changes occurring in Rio. Along with neighboring Mangueira it received a Police Pacification Unit (UPP) in November 2011. Although there have been bumps in the road–including a double murder and the robbery of a UPP officer’s gun earlier this year–most residents seem to view pacification positively. They are less enthusiastic, however, about some of the changes that have followed in its wake. Light, the electric utility, recently arrived in the favela, placing a sudden squeeze on household budgets. Meanwhile, many key services continue to underperfom and there is an almost total absence of educational and leisure activities for children and young people in the area. Indeed Tuiuti seems to encapsulate many of the frustrations that drove hundreds of thousands onto Rio’s streets in June. For the first time in over a century São Cristóvão’s land values are rising rapidly and Tuiuti’s residents can look down on a glistening new Maracanã stadium. Yet if the ‘Bairro Imperial’ is regaining its crown they themselves are not feeling any richer.

Whatever happens, Dona Margarida is happy on the hill she has called home for 90 years. “I was thinking the other day, that I’ve gone up and down this hill so many times.” But it has been worth it. “It’s a good place. It’s a hill that knows how to receive people, and we’ve never seen despair, thank God.” For all that life has thrown at her, Dona Margarida, like the hill itself, is still standing.