For the original by Artur Voltolini in Portuguese for Observatório de Favelas click here. 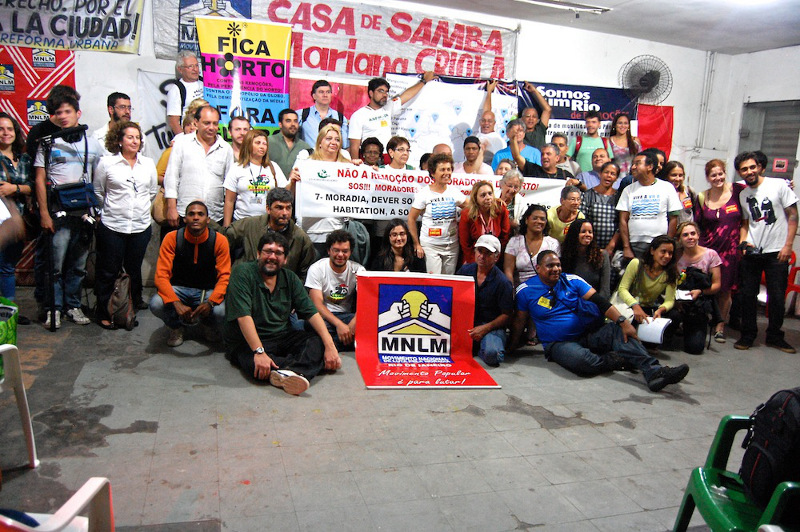 The Manuel Congo Occupation was the stage last Friday September 27 for the “Public Hearing: Evictions for Large Projects in the City of Rio de Janeiro.” Originally planned by City Councillor Renato Cinco (from the PSOL party), the hearing was cancelled by Council President Jorge Felippe (of the PMDB party) only 30 minutes before it was due to start. The alleged motive was the protest by striking teachers taking place in front of the City Council which, according to organizers, was an attempt to pit one movement against the other.

Since there was a large presence of representatives of Rio communities affected by eviction and who traveled far and missed a day’s work for the hearing, the organizers identified a new location for the hearing, the Manuel Congo occupation. This victorious occupation, next to City Council, was previously owned by the INSS (National Institute of Social Security) and abandoned 15 years ago and occupied since 2007 by 42 families, supported by the National Movement of Housing Vindication (MNLM), and which is set to receive R$600,000 for renovations from the federal government.

In the improvised meeting hall, leaders from communities suffering eviction–Providência, Magalhães Bastos, Horto, Tubiacanga, Maguinhos, Vila Autódromo, Vila Recreio and Santa Marta–shared their experiences with representatives from organizations such as the Engineering Club, the Fiocruz Worker’s Union, Amnesty International and the Favela Observatory.

The truculence with which the public hearing was cancelled ended up strengthening the unity between the victims of removals and institutions which fight for the right to housing. The group rescheduled a public meeting for Thursday (October 3rd) at 5pm in the same location, (the Manuel Congo Occupation, Rua Alcindo Guanabara 20, in Cinelândia) to plan a big United Action and the date for a new public hearing at the City Council against the evictions which have become a common feature of Rio de Janeiro’s preparations for the mega-events which it is due to host in 2014 and 2016.

“We need to unite our strengths to discuss what the social function of the city is, and of property in the city. We want a model city in which all residents are considered,” said Lurdinha Lopes, 54, one of the coordinators of the MNLM as she summoned people to Thursday’s meeting.