This post is a contribution to Blog Action Day 2013 in which bloggers around the world reflect on this year’s theme, Human Rights.

Yesterday, Tuesday October 15, an estimated 20,000 people took to the streets in solidarity with teachers on strike and demanding improved education in Brazil. Taking place on Teachers Day, the protest was the latest in a series of recent protests regarding education and teachers’ pay, career plan and roles. Demonstrators marched down the main downtown artery, Avenida Rio Branco, before, as in other recent protests, violence broke out between protesters and police.

Present at yesterday’s protest were representatives from favelas and community organizations across Rio, mobilizing in unity with teachers and bringing attention to their own struggles within the broader city context. We spoke to favela residents, activists and teachers in attendance, asking them why they took part in the protest. Here is what we heard: 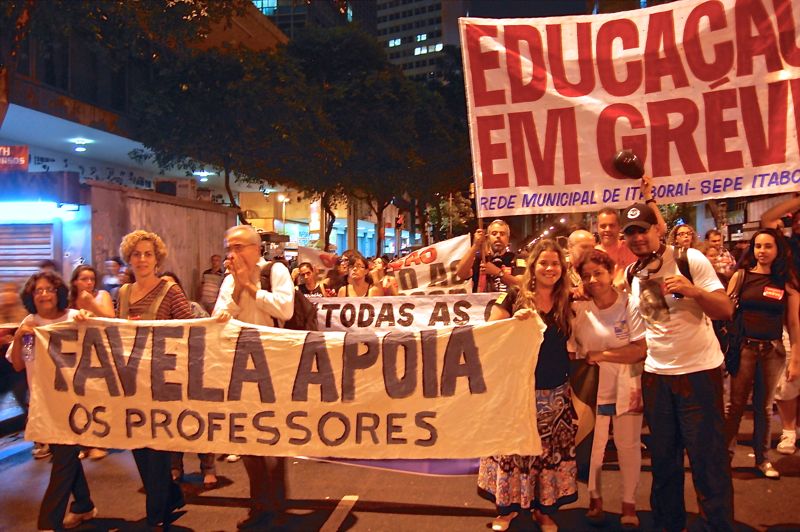 We are from the Horto community, located in Jardim Botânico, a historic community threatened with removal because the authorities recently created a new demarcation map, which places 520 houses of former and current employees of Jardim Botânico within an area to be removed… In Horto we are facing the possibility that one of our schools (Manuel Bandeira) will be closed. Education is the most important thing in a country, it is the foundation of everything. We are here not only supporting the teachers’ movement, but also to unite all the demands, all those communities that are unsatisfied with this government. We are coming together in a unified struggle with a broader, all-encompassing vision.” — Regina Célia da Costa Coelho, Horto resident 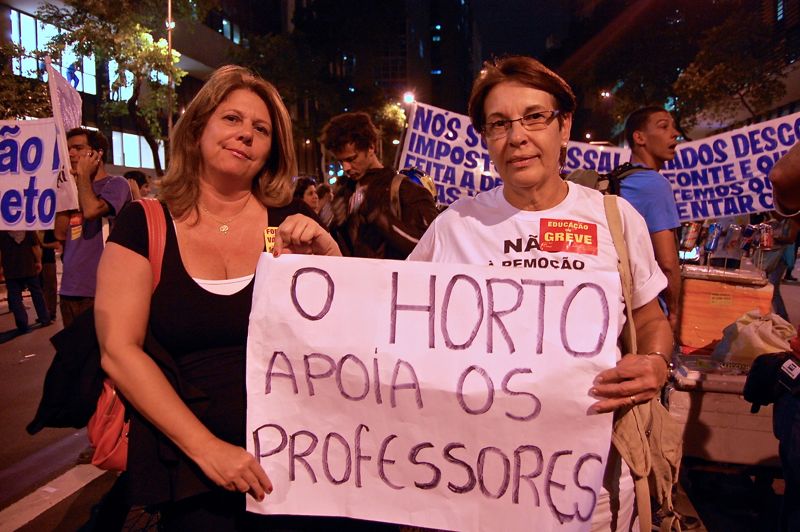 The teachers’ strike, just like the removals and the deterioration of the quality of life in the favelas, are all related to this model of the city that emphasizes the market instead of the people that live in the city.  With the strike, we are seeing violent police repression, the criminalization of social movements, teachers and activists being sent to jail, all of this is involved in this [model], which is the close relationship between the State and private enterprise, and the lack of respect that the State is showing its population, especially in the provision of basic services.” — Vinícius Neves, teacher at a municipal school in Maré 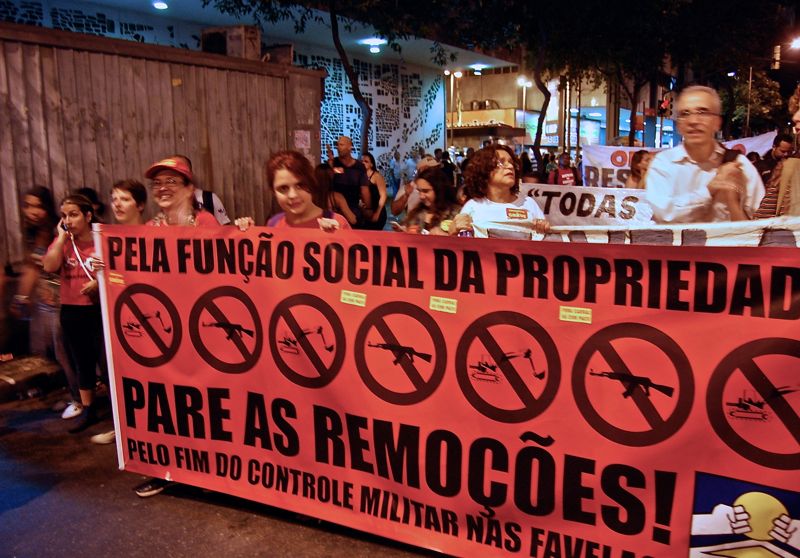 We are here because we want to strengthen the teachers’ struggle and take the opportunity to express that we cannot stand any more removals being carried out by Mayor Eduardo Paes, along with [Governor] Sérgio Cabral. We are united across various favelas, acting together and alongside the teachers… Education is being jeopardized in our country. Eduardo Paes wants to impose a system which would privatize and impair the education system. This is why the teachers are fighting.  It is not just about the ‘Career Plan,’ it is for quality education.” — Noemia Magalhães, member of National Movement of Housing Vindication (MNLM), a Duque de Caxias resident. 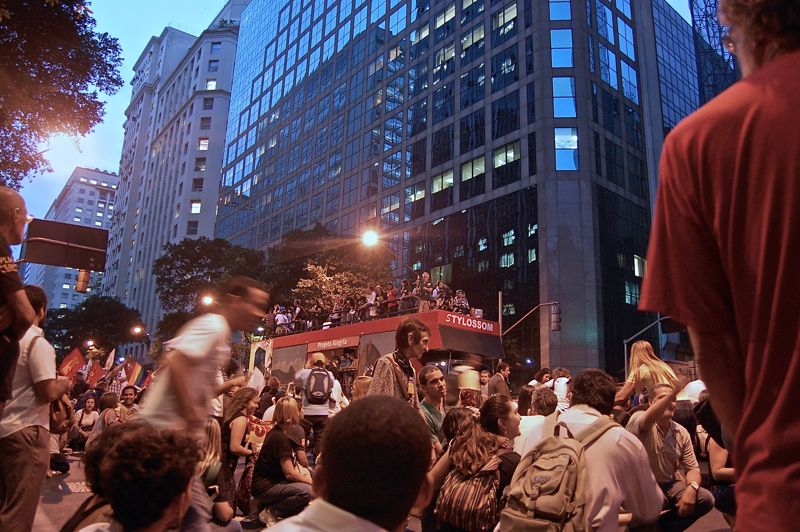 Here [at this protest] there are teachers from the city, state and federal schools, expressing to the government that we are unsatisfied with the way education is being structured and organized. Students from favelas receive an education with very little infrastructure. For example, in the two high schools where I teach, the Internet doesn’t work, the computers are terrible. I teach foreign languages and I don’t even have equipment to play a CD. Teachers have to work in more than one school which lowers their income and causes them not to have a strong relationship with the students or the school. My classrooms have 40 students, there is very precarious infrastructure in the schools.” — Rubi Merino, teacher in Rio de Janeiro state public schools in Rocinha and Jardim Botânico 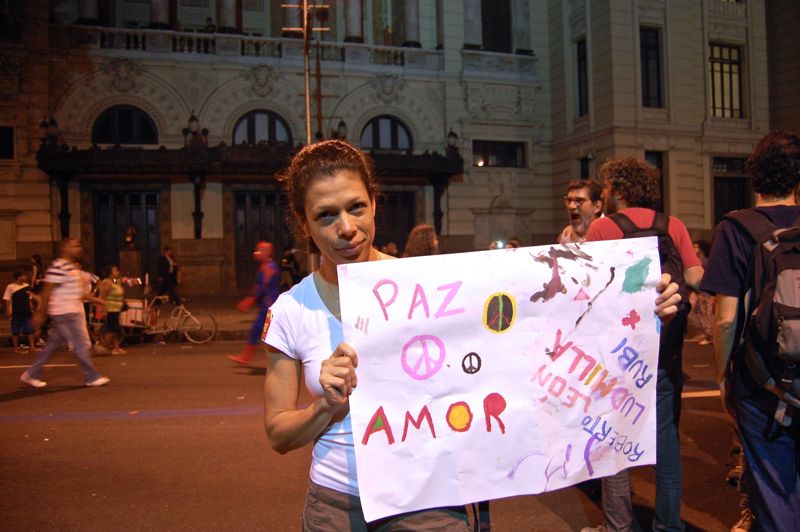 We consider education to be fundamental, it is the foundation of society, so we are all here fighting for this foundation. If you have a quality educational system, you will have educated, enlightened people. People who can question. This is our objective here:  it is not just our salaries, it is quality education.” — Regina Celia Rodrigues da Silva, a teacher in the state public school system 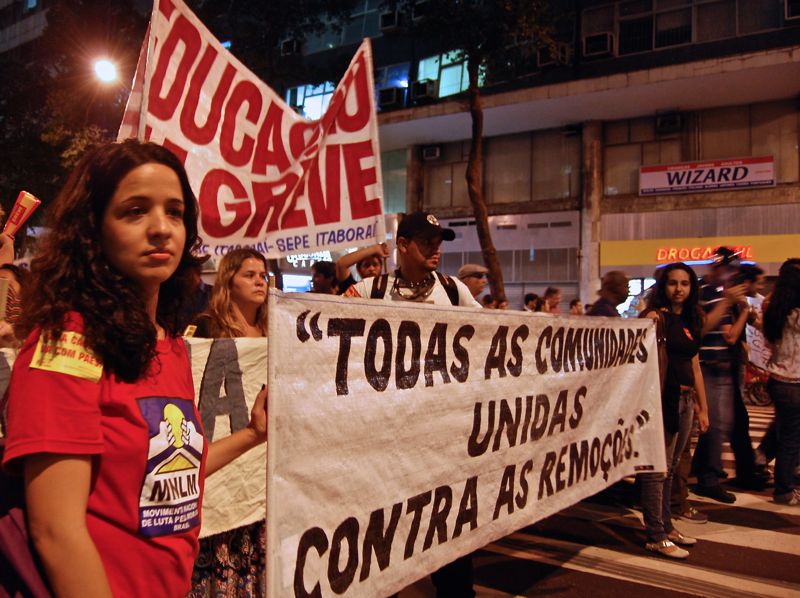