For the original in Portuguese by the Rio Popular Committee for the World Cup and Olympics click here. 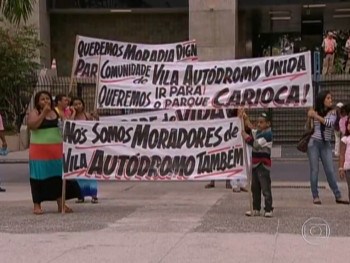 A protest of about 20 people on the doorstep of Rio’s City Hall on Wednesday October 30 showed that the city government knows no limits in its attempt to legitimize the removal of residents from Vila Autódromo. The few present said they represented 150 families that want to leave the community. However, that same night, yet another community assembly was held among residents who continue to fight against removal. The Residents’ Commission has already collected 198 signatures of families who want stay in Vila Autódromo, and hasn’t yet been through all the community’s streets.

Over the last few months, Rio’s city government has been placing agents in the community on a daily basis to convince residents to leave, including the constant presence of sub-mayor Tiago Mohamed. There is no motive for any type of demonstration supporting the removal of residents, since it is the city government itself that wants this to happen. Residents reported that city representatives had made two buses available to take the protesting residents to City Hall. People there could tell that the protest was staged for TV Globo, the news channel covering the event.

The Vila Autódromo Residents Commission is planning genuine activities to show what is happening within the community. One of the events will be a mass led by the Archbishop of Rio de Janeiro, Dom Orani, in the community on Sunday, October 11 at 9am. 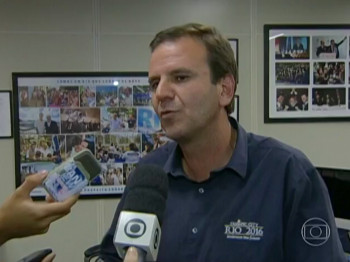 In addition to having been established in the area for at least the last four decades, the community of Vila Autódromo has a concession of use title, a legal title granting residents the right to occupy and use the land. The argument stands that the community’s removal is necessary for the Olympic Games. However, the official project developed by the British architecture company AECOM envisions the urbanized community as a legacy of the Olympics. Furthermore, there is a popular urban development project created by residents, architects and urban planners from the Fluminense Federal University and Rio de Janeiro Federal University that shows the compatibility of the existence of Vila Autódromo with the Olympic Games.

The team from the universities have shown that the plan presented by the city government for those who wish to stay is technically unfeasible. In the new design, there is no access to the local roads of the community, and drainage problems caused by the Olympic Park have yet to be resolved. The City also does not state publicly that the community would be upgraded. Many of those who say they want to leave complain of problems caused because of the city’s negligence in the area.

The community of Vila Autódromo is located in the most valuable area of Barra da Tijuca, which will be at the center of the Olympic Games. The public-private partnership that the City of Rio signed with contractors Norberto Odebrecht, Andrade Gutierrez and Carvalho Hosken anticipates the transfer of more than 1 million m2 to the consortium after the Olympics. As stated in the bid, luxury condominiums and hotels will be built on the site after the Games. A portion of Vila Autódromo makes up a part of the PPP and would be passed on to the contractors.

Eduardo Paes is known in Barra da Tijuca and Recreio for ordering the violent removals of communities in the region during his time as sub-mayor in the 1990s. Today, Paes is the mayor that has evicted the largest number of residents from favelas in the history of the city, in absolute numbers: 65,000 people since 2009. At least 14 communities do not exist anymore. There are many denunciations of human rights violations, pitiful or no compensations for the residents, psychological torture, and illegal removals. The information is in the dossier that was handed to Paes by the Popular Committee for the World Cup and the Olympics.