On October 1, Brazil celebrated the 10th anniversary of the passage of its Statute of the Elderly, a landmark piece of legislation that consolidates basic rights for Brazilian citizens over the age of 60. With the Statute’s passage, rights to life, health, education, leisure, and respect, among many others, become the shared obligation of families, communities, society, and the government. Advances can be seen in preferential access to public transportation, in the construction of nursing homes, both public and private, and in a crackdown on age-related discrimination in the private health insurance market.

However, implementation has been far too slow and sporadic for many that champion the rights of the elderly. A recent Applied Economic Research Institute (IPEA) report explains the limited reach of the Statute, highlighting the fact that neither priorities for implementation nor specific sources of funding were included in the legislation.

The Rio de Janeiro State Public Security Institute (ISP) has been tracking multiple forms of violence against the elderly, including incidents related directly to the provisions in the Statute of the Elderly. In 2011 alone, they report a total of 61,353 crimes against the elderly. These include abuse, neglect, fraud, murder, extortion, abandonment in nursing homes, failure to provide health and social assistance, discrimination, and exposure to situations that endanger physical or mental health.

An innovative, citizen-led project, the Casa de Santa Ana, addresses these challenges through a day-center that supports the health and well-being of the elderly in Cidade de Deus, known in English as City of God, in Rio de Janeiro’s West Zone. Its founder and coordinator, Maria de Lourdes Braz, began putting her vision of care for the elderly into practice in 1991, a decade before the Statute of the Elderly was adopted. Counter to the popular belief that a nursing home is the best place for an aging person, she learned through her work and observations at a private facility that people could be expected to live longer, healthier lives if they stayed at home in their communities and with their families whenever possible.

Opening its doors daily for as many as 150 elderly people, the Casa serves as a reference both within and outside of City of God. Its expansive vision of care includes activities such as the regular changing of bandages on diabetic ulcers, the provision of nutritious meals, and access to physical therapy, massage, and exercise classes. Emotional well-being also plays a large role in the work, as the elderly can visit with a counselor and participate in singing, dance, and theater classes. The Casa also provides specific training to health professionals and families within City of God, and seeks to educate the next generation on issues facing the elderly.

Limitations on access to health care within City of God make the work of the Casa all the more important. Dagmar, a physical therapist working at the Casa who also coordinates the wound-dressing program, explains: “The public health post has an outpatient service, but they only attend a certain number of people. Sometimes they do not have materials and there is high demand. They do not have a specific service for the elderly.” Maria de Lourdes Braz described the Casa’s strategy of incorporating people into the program before they need to be interned in a hospital or nursing home, describing that “if you go to a nursing home in poor health, the time that you will live there is very short.”

Lourdes measures the success of the program in various ways, specifically citing the low levels of hospitalization and instances of revitalization she has witnessed throughout the Casa’s existence. The public health post also refers patients to the Casa for some issues, which signifies that the care it provides is of excellent quality.  However, this pattern of referrals raises questions about the extent to which the State is fulfilling its responsibility for elderly care. “When an old person goes to the health clinic, in some cases, mainly when they need bandages changed on their wounds, they have been told, ‘go over to the Casa de Santa Ana because they do good work,’” Lourdes explains. “We tell them not to do this, however, because basic health care should be their role and not ours.”

Lourdes’ practice of putting the needs and perspectives of her elderly constituents first emerged from her frustration with a top-down management style that ignores the needs of individuals. “I thought that people needed to be listened to, that we had to ask them what they wanted. This is simple, it is more work, but it is much more effective.” 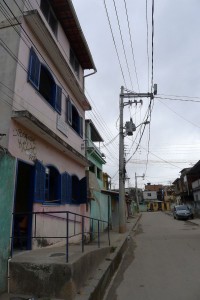 The Casa de Santa Ana has grown and evolved in its 22 years and now occupies two buildings in Cidade de Deus: one is a church that Lourdes lobbied to have renovated to house her project, and another built on land that one of the project’s long-time participants, Geralda, donated just before she died.  The Casa de Santa Ana is presently undergoing another round of renovations, so the majority of the activities are taking place in “Geralda’s House.” Beds and tables are carefully positioned on its lower floor to allow for as many patients as possible to be attended to simultaneously. The upstairs holds a kitchen, eating area, and a community room. Only ballet classes for children from the community are held in the Casa’s first home at the moment.

Lourdes includes young people in the activities of the Casa whenever possible as part of a larger strategy of “inter-generational integration.” Beyond the energy and joy that young people bring to the project, Lourdes sees connecting youth with their elders as an important strategy for advancing the rights of all. “The objective of the program is to gather all the age groups so one can support the other,” she emphasized.

Participants spread what they learn and experience, Lourdes notices, describing the Casa as the source of a broader shift in understanding of the aging processes that emphasizes respect for the elderly as a means of confronting and accepting the process of growing old: “It is wonderful to hear a young person say that after a class on respect for the elderly she can no longer sit on the bus and pretend to be sleeping to avoid having to give up her seat to someone in need.”

The present renovations are allowing the Casa staff to refocus priorities and define objectives. Finding it difficult to name the most important activity of the center, Lourdes offers a reflection on a broader contribution that is possible through their work. “Respect must be at the forefront,” she says.  “It is wrong that just when a person is old and dying, she no longer has rights. I think the most important thing is that this person is cared for and that there are both a culture and an effective public policy ensuring this care.”

She considers the promotion of the Casa de Santa Ana model to other communities throughout Rio de Janeiro and Brazil to be an important step toward reaching this goal, speaking often at conferences and bringing along groups from the project. Not lost in this pursuit, however, is the project’s significant effort to influence cultural perceptions of aging and to recognize the rights of the elderly, person by person, day after day, in Cidade de Deus.