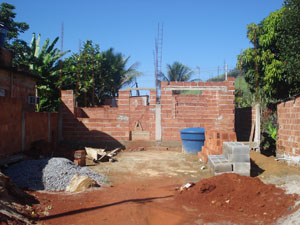 This is Part 3 of a three-part series about one community’s struggle with forced evictions. The series looks at the realities of Rio de Janeiro City government’s removal process, life for residents moved to public housing units, and life for residents who resist.

While homes of residents who’d left for Cosmos were being demolished in Guaratiba this past January, those few who chose to resist, taking advantage of their legal rights, and await what they hoped would be fairer options, faced “double pressure,” according to residents. “Every day workers were there with a tractor at my front door… They knocked down the house that shared a fence with mine, they knocked down the house on the other side… they would circle my house with the tractor… The excavator, the mechanic arm, would go up and down on my doorstep,” tells Fernando da Silva Matos.

The Regional Vice-Mayor, Edimar Teixeira, took an active role in the abuse, ordering workers to cut off water and lights in addition to demolishing nearby structures to scare people out of their homes. “When City government shows up, it’s not just one person, it’s a whole bunch of them trying to intimidate you. The Regional Vice-Mayor said himself he would come with the “Choque de Ordem” (Order Shock) to take everything out of my house and tear it down. I went through this three, four times, him personally coming to my house to threaten me,” shares Fernando.

Unfortunately there was no consideration for the traumatizing effects this could have on children in the homes, and Fernando’s daughter, like other residents’ children, suffered. “My daughter cried all the time,” tells Fernando, “When she would lie down at night, she was afraid of them demolishing the house. This was psychological, and she’s so small.” Fernando’s daughter is eight years old.

Even though residents had informed themselves with the Public Defenders Office, the resistance was all their own. Ten of the original 200 families resisted. “No, no, you have to pay us whatever will buy another plot of land here, another house here, where we live, because our lives are here, and we like this place,” tells Fernando.

Based on a recommendation by the state’s public defenders, those who resisted stayed put to protect their homes and neighbors. “I was unable to work. I might get home and my house could be destroyed. My wife would go to work, my daughter would go to school, and I would stay home watching over the house… the terror was so great that we couldn’t leave anyone alone. They (City government officials) had to see that there were witnesses,” recalls Fernando. 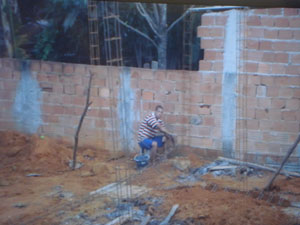 After living with such threats and abuses for the month of January, residents were able to get a somewhat better offer from the Secretary of Housing, thanks to a resident’s contact. At first City government had offered R$10,000 to each family regardless of plot size or house quality. Now the Secretary of Housing sent an appraiser. Despite this, land and houses remained significantly undervalued. Plots that wouldn’t have sold for less than R$120,000-150,000 were appraised at R$35-70,000.

Even so, residents accepted the updated offer. One resident explained: “We were afraid to keep fighting, thinking it could get worse, (so) we accepted this value because of fear we’d lose out.”

What have the families that settled for financial compensation been able to do with such values?

Fernando has been out of work since January, at first defending his home and land and then building his new home. After four months of expense—including labor and materials for construction, along with rent payments—the money is gone, and his new house is at least one month from receiving a roof. Once the roof is finished, Fernando will move his family out of rental housing and into the unfinished home to save money.

Fernando’s previous plot of land, shared with his father-in-law, was approximately three times the size of the land he has now. The original plot included his own home as well as his father-in-law’s house and small business. However, Fernando is grateful he has been able to relocate 5-10 minutes walking distance from his previous home, and his father-in-law, like others who resisted, stayed close by, as well. Fernando is allowing himself the time to build his home well, with potential for upgrading from two to three stories in the future. To accomplish this, he is spending more on the foundation and construction initially, but his family will be “better off in the long run.”

“If they had paid me a just amount, I would have built my whole house. With the money I got, it’s impossible to finish the whole house. The house is stopped the way it is now because there’s not enough money to finish it.” Other families have completed only makeshift homes to make do until better homes can be built with more money in the future.

The families who resisted are all using the compensations received to build in nearby areas, little by little, while living with neighbors.

In spite of the downgrade in land size and unjust treatment and compensation by City government, Fernando, as other heads of households also expressed, is just “happy to continue living in the same place I always wanted to live, near the things I’ve always done.” 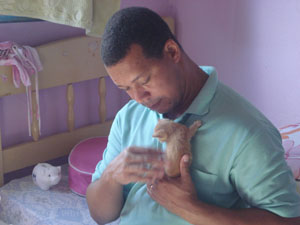 The continuity of community life is precious: “here we know the people around us: we know the employees at the bakery, we know the people at the market, and the people know us.” Further, those who resisted eviction and forced placement in Cosmos are well aware of the living situation in Cosmos and cite problems with school, jobs, medical services, and mainly security as motivations for their decision to stay. “We don’t have to face the problems people [in Cosmos] are facing,” shares Fernando.

Dozens of adopted pets provide daily reminders of the mismatch between the experience of residents who received compensation and stayed nearby and those who were removed to Cosmos. These pets were abandoned by residents who took apartments in Cosmos when they were forced to leave them behind because of apartment rules. Fernando alone now has eight dogs and four cats, none of which were his. “So many little animals were abandoned,” tells another neighbor, “I’ve got a ton of pets at home now.” Neighbors laugh about this crazy act of kindness that has brought them together in solidarity.