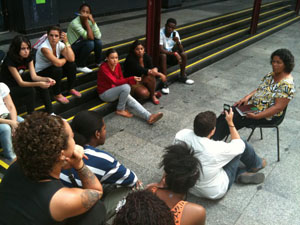 Imagine yourself seated, somewhat drowsy, in front of the television. All of a sudden, you’re awakened by a news broadcast, given loudly and clearly by Mayor Eduardo Paes, that the community in which you have lived for 40 years is going to be removed. On Friday, October 9th, 2009, this was exactly what happened to the artisan Jane Nascimento de Oliveira, a 54 year-old resident of Vila Autódromo, in Jacarapagua, in the West Zone of Rio de Janeiro. On this day, the president of the International Olympic Committee, Beligan Jacques Rogge, announced to the world that Rio de Janeiro had won the battle against Chicago, Madrid, and Tokyo and would be host to the 2016 Olympic Games. The old fishing colony, which today is home to 2-3,000 people, would give way to the Media Center and the Olympic Training Center.

That was not the first time that Vila Autódromo, a cluster of around 900 homes spread out between Lake Jacarepaguá and the Nelson Piquet International Racetrack had had its existence threatened by a governmental decree. It also would not be the first time Jane would enlist herself in a campaign of epic proportions to save the community, pursued since the 1992 Earth Summit, another international event that gave Rio de Janeiro high visibility. “In that era, the government alleged that the area was one of environmental interest,” recalls the activist. “The city government even went so far as to put a tractor by the entrance to the community to topple the houses. So, the people closed the community and did not let anyone enter.” The same pressure was put on the community in preparations for the Pan-American Games in 2007.

Vila Autodromo’s resistance is now becoming less heroic and more political, with the intense need to mobilize the community and form a network capable of lending visibility to and sustaining a campaign on behalf of the 123 communities threated with removal by the Olympic Games. “We are present at all the demonstrations against the removals,” relays Jane, who makes a point of reaffirming the leadership of Altair Guimaraes, the President of the Vila Autodromo Resident’s Association, in the resistance of his community. The community also utilizes new media strategies, such as email, Facebook posts, and Orkut “scraps,” in addition to spreading news by way of cellular service provider specials, which permit the group to converse amongst themselves free of cost. The leaders of the movement also speak frequently with the Public Defender’s office.

The result of this work has been significant at a moment when the city’s social movements are subjugated by the media and public’s general acceptance that hypothetical gains from the World Cup and the Olympics justify any measure.

“Now (that the City has moved plans for the Media Center to the Port Zone) they have created a (new argument, that a) ‘security perimeter’ (is needed) around the racetrack, which the residents will be unable to cross during the games,” explains Jane. The community leader already has at least two responses to the Mayor’s new argument. “There has never been an assault on race days at the track,” she recalls. There have also never been any reported acts of violence during the major events promoted in this area, such as the 1992 Earth Summit and the Pan-American games. “If the government was, in fact, worried about terrorist attacks, it would prohibit the (apartment) buildings around here,” laments Jane. According to her, the best place for an elite sniper to act with impunity would be one of the many balconies of the apartments that are continously being offerd for sale in the area – the new “El Dorado” of the real estate market. It’s clear that the mayor is not considering bulldozing the apartment buildings that surround the racetrack.

Another contradiction denounced by Jane is the hesitance by the public sector to invest in education and health in direct contrast to their “generosity” towards private business, funding the destruction of favelas and building white elephants in their place.  White elephants that will shortly be ostracized, as happpened with the sports complex constructed hurriedly for the Pan-American Games. “Health is bad, education is bad, but the government gives money to projects that, besides expulsing the poor population in order to build on top of their houses, cannot be enjoyed by the working class.” According to the community leader, the government is harsh when it comes to interpreting the law which gives it the right to pressure residents of Vila Autodromo, but, when the law benefits the community, the government ignores it. “Article 429 stipulates that the state, when evicting a community, cannot relocate it at a distance greater than 7km from the original site,” she explains, mindful that this law was created in order to impede social marginalization of people. In practice, however, the Municipal Housing Secretary is offering them houses on the extremities of the West Zone.

As Jane explains, the government continues trying to stifle the movement in support of Vila Autodromo, using a strategy that, created 500 years ago by Machiavelli, still proves effective: divide and conquer. “The government seeks out people who have a shoddy house, and offers them a good house far from (the community),” explains Jane. “If the person accepts the house, the government forces them to leave promptly, but if they don’t accept it, they are offered better compensation, until the person leaves.” This demobilization effort is proving effective for the municipal government in other communities threatened by the works designated for the World Cup and the Olympics. “Some of the more well-established communities, the ones which believed the mayor’s promise that they would not be moved, were taken by surprise,” Jane says, as she relays the example of a community that, just one week prior to this interview, was demolished. “There are only eight houses left,” she laments.

There has been much deception during the process, with the mainstream media’s distortion of the public statements it gives, and impression given by the Mayor that the land titles distributed by ex-governer Leonel de Moura Brizola in 1994 were not legal. “The mayor, Eduardo Paes, publicly told us that that ‘little paper’ was not worth anything,” she complains. The artesan acknowledges the possibility of political defeat, but only if the government is able to prove, on the day that its surveyors visit the community, that it does in fact fall within an “area of risk.”  “But if the ambition is to attend to the interests of the real estate market, we’re not lifting our feet from here,” she confirms. The response of the population, which barely lets her pass when she circulates around the community, helps justify her absence from home and deal with her daughters’ resentment that she is rarely around anymore. “They want to confuse people, have them think that the issue has already been resolved, and stop complaining. I’m not going to rest, I’ll continue until I die,” she proclaims.