Standing in the door to her home in the heart of Indiana, a small low-lying favela at the foot of Morro do Borel in Tijuca, North Zone, 82 year old Dona Maria Alves dos Santos explains that the threat of eviction is nothing new to her. She says, “Ever since I came here they’ve said [the community] is going to be removed, but it’s never happened.” A resident of Indiana since the community’s beginnings 50 years ago, she tells of how she expanded her neatly kept house over the years and raised her eight children and grandchildren in the favela. “I love my little house,” she says softly, with tears in her eyes. 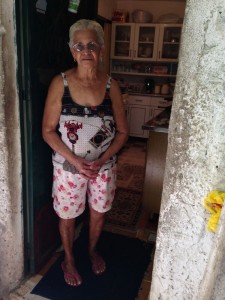 Indiana was founded in 1957 by Dona Amélia Igdorne and her family, with relatives and friends coming from the North and Northeast to build in the area that Dona Amélia had been permitted to build her hut. Originally known as Irmãos Coragem, the community came to be known as Indiana and developed with very little state intervention over five decades to become home to over 600 families. Though murmurings of possible eviction have occurred over the decades, for the last five years, and particularly from January 2012, the community has been subject to a divisive eviction campaign.

In June 2009, then Municipal Housing Secretary, Jorge Bittar, announced the complete removal of Indiana to clear the 13,754 meters squared area on the banks of the Maracanã river to then be regenerated and transformed into a square. Residents would be moved to a Minha Casa Minha Vida public housing to be built in the area. Speaking to Extra at the time, Bittar said, “What guarantees that the removal of Indiana will go ahead this time is that we have an abundance of resources.” He went on to cite an agreement with the Residents’ Association that the eviction go ahead.

Six months later, in January 2010, the Rio city government announced the total removal of 119 communities, including Indiana, by the end of 2012. In the following months agents from the City visited the community taking photos and entering homes, informing residents that the survey was for the implementation of upgrading works in the community. 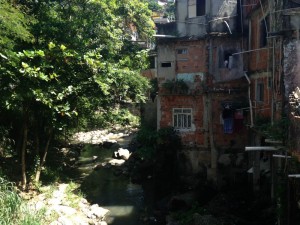 It wasn’t until January 2012 that the City directly communicated with residents regarding the eviction, when Jorge Bittar visited Indiana to hold a meeting at the entrance of the favela. Recalling the meeting, Maria do Socorro, 47, Indiana resident of 41 years and a leading activist in the campaign for the community to remain, says: “He said he had the Bairro Carioca project and that they were good apartments, that they are in Triagem and that whoever wants can go and see. The City would provide buses and vans. He said he was here to prioritize [residents on] the river’s edge which for him was a risk area, but that whoever wanted [an apartment] could get one.”

Contrary to the 2009 announcement which envisioned the total removal of the community to a nearby condominium, Bittar’s 2012 proposal to the community was an offer of apartments in a condominium ten kilometers away to whoever wished to take one. There was no project presented for what would happen to the land beneath the vacated houses in Indiana. According to Maria do Socorro, Bittar saying that anyone could get an apartment and not restricting the issue of removal to those in precarious housing has caused great turmoil in the favela. “They planted an evil seed doing that,” she says. 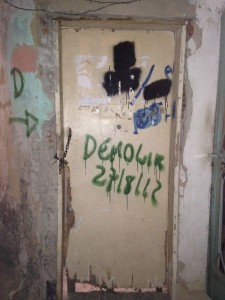 Two weeks after Bittar’s visit representatives from the City came to the community individually pressuring residents to accept the apartments as their homes were to be demolished. The announcement and subsequent pressure created panic amongst longtime residents with community ties and consolidated homes, many with three floors and a roof terrace, in an area designated low risk by the City’s own Geo-Rio team. Residents sought out the Catholic Church’s Pastoral de Favelas, established a residents’ commission and went to the Public Defenders’ Office to question the legality of the City’s actions and mount a court case. Meanwhile between March and October 2012, 110 families were removed from Indiana, most to apartments in Bairro Carioca.

In December 2012, following a judicial hearing in which the City failed to present a project justifying removals in Indiana, a court order was issued deeming the City’s intervention in violation of participation requirements according to the City master plan, and prohibiting the further demolition of homes and ordering the City to remove the rubble of the homes already demolished.

Though a victory for the community, the court order was subsequently used by the City as the reason not to hand over Bairro Carioca apartments to residents who did want to leave. Maria do Socorro explains, “They started using the court order against the residents, pitting resident against resident and up to today this is the fight here.”

In fact, the City was prohibited from handing over any more apartments in the Bairro Carioca condominiums until works dredging the Cunha canal which flooded the apartments in March 2013 had been completed. Falsely using the Indiana court order as the reason can only then be interpreted as a deliberate attempt to create corrosive divisions within the community. 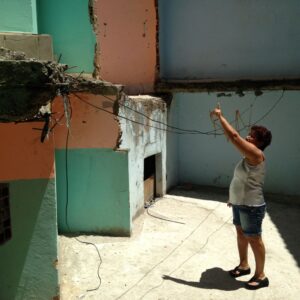 According to the Popular Committee on the World Cup and Olympics’ 2013 Dossier, 120 families have been awaiting apartments and 397 families fight to remain. Tensions increased between the two groups as those awaiting apartments believed those fighting to stay were depriving them of a new home, despite attempts to communicate otherwise.

The residents’ commission of those wanting to stay mounted a resistance campaign communicating with international press, working with the Rio State Land and Maps Institute to create a land register with a view to titling, reaching out to politicians at the municipal, state and federal levels and actively working with city-wide networks such Favela Não Se Cala and the Popular Committee on the World Cup and the Olympics. It was as a result of this work and following the massive protests in June 2013 that Maria do Socorro was invited alongside other favela and Popular Committee activists to a meeting with Rio Mayor Eduardo Paes in August in which the mayor denied ordering Indiana’s removal.

The same month Paes visited Indiana and made a speech in which he repeated several times that it was never his intention to remove Indiana (contradicting his administration’s announcements between 2009 and 2012) and apologizing for the lack of transparency and communication. He denied the real estate speculation that residents believe to be the real motive behind the eviction, called for an end to the hostility between the two groups of residents and promised that “from now on the agony ends.”

However the agony continued as no advancements were made and conflicts have continued to the point where, during a City visit to negotiate with the community in December 2013, one woman who doesn’t live in Indiana but intends to claim an apartment as if she were a resident, attacked Maria do Socorro.

The current situation is one of chaos, uncertainty and conflict. Since 2012 the residents’ commission has called for the properties vacated by those who move to Triagem to be made available to those living in precarious housing on the riverbanks. Yet the City wants to demolish vacated properties, which in a densely built community would put adjacent structures at risk and cause health problems for existing residents. To complicate matters more, properties vacated by those who received apartments in Triagem are largely occupied by new arrivals from outside the community or are being illegally rented out by their former owners. 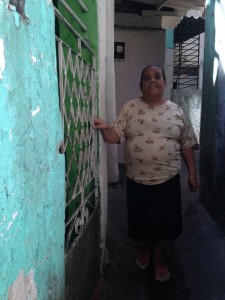 For longtime residents of the community, many elderly, their simple desire is to be left alone. Cícera Gaspar Silva, 59, has lived in Indiana for 30 years and speaks of how much she loves the favela–“My community is my family”–and how she went to see the Bairro Carioca apartments (“Just on sight I didn’t like it”) and wouldn’t consider leaving Indiana. She says, “I want the City to leave us in peace, because there’s no point them wanting people to go where they don’t feel well.”

Maria do Socorro, a petite lady who speaks fast and has an eye of steely determination, has been militant in her activism to remain in the community she’s lived in since the age of 6. In this time she’s been physically assaulted and received death threats. Despite this she remains committed not only to ensuring the permanence of Indiana but to securing public investments and improvements in the community.

Maria do Socorro and all other residents interviewed talk about how pleasant and well located the community is. Maria do Socorro tells of how she used to live in a hut and the struggle of building up her three storey home to its current state. Speaking in her cosy living room, do Socorro explains that for these reasons and more she won’t contemplate leaving. She says: “I want to continue my life and grow old here because removing someone from a favela where they’ve lived for 40 or 50 years is like cutting a tree down at the roots. Removing me from here is removing me from my roots. It would kill me.”

In this time of continuing uncertainty and conflict, Maria’s requests of the City are simple: “I ask that this mayor leaves us in peace, for the love of God. Any mayor in their administration should go to the favelas to help the long-suffering people who vote for them by making improvements and doing a dignified job. If a favela is at risk, do contention work. Nothing has ever happened in Indiana, you think everyone has to leave?”

Whether the City still intends to remove the entire community, as originally and repeatedly stated, is unclear. The intention to demolish solid homes instead of making them available for residents of precarious housing wanting to stay in the community raises questions, as does the lack of information for all resident groups. Only one thing is clear and unites all residents–those committed to staying and those wanting to move to public housing–a chronic state of uncertainty.