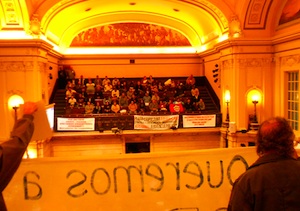 The Pan-American Games, held in Rio de Janeiro in 2007, set several precedents for the mega-events that will be hosted by the city in the next half dozen years. Hosting the Games established Rio as safe, efficient, and welcoming enough to make it a potential venue for major sporting events, and helped win bids for the 2014 World Cup and 2016 Olympics. The relatively incident-free Games improved foreign views of Rio and Brazil, amending the stereotypical image of drug wars and beach parties. They established the city as a credible center for business and real estate development as well as sports.

Although the Games bolstered Rio’s international reputation, they had less positive consequences for the city’s residents, a pattern that continues today. They ran far over budget, making them the most expensive Pan-American Games in history at R$4 billion. Planners
failed to build future public use into sports facilities, and many were left empty as soon as the Games ended. Maria Lenk Aquatic Park sits unused today, and Engenhão Stadium was simply rented to Botafogo, one of Rio’s prominent soccer teams. The Olympics and World Cup planners don’t appear to have learned from their predecessors: the renovation of Maracanã stadium is not done complete, and many other facilities are behind schedule and over budget.

The Pan-American Games evicted or disrupted favela communities to make way for sports facilities, a policy that continues today in Vila Autódromo, Pavão-Pavãozinho, Favela do Metrô, and many others across the city. The recent wave of removals violates city, federal and international housing rights legislation.

Residents are often given only a few days to leave their houses, and those who question the order receive unclear or insufficient explanations without official documentation. Homeowners are offered insultingly low sums for their houses or inferior housing far from jobs and other basic services. In some cases houses are simply demolished, whether or not residents have moved out.

In July 2007, just after the Games ended, City Councilman Eliomar Coelho proposed creating a Parliamentary Inquiry Commission (Comissão Parlamentar de Inquérito, or CPI) to investigate the inflated budget, evictions, and irregularities in ticket sales. Launching a CPI allows the City Council to request privileged information from the mayor. It can incriminate public officials and influence legislation. Coelho convinced seventeen other councilmen to vote for the CPI (the required minimum), and four other councilmen, from the political parties with the greatest representation on the council, were appointed to the committee. Coelho submitted a document listing the issues the CPI wanted to investigate to the mayor’s office.

The investigation never got off the drawing board. In August, Nadinho, the councilman for Rio Das Pedras (also a known militia boss who was later assassinated), requested a delay until November, when the council devotes its time to finishing the next year’s budget. When Coelho finally convened a meeting, Nadinho and two of the other committee members simply refused to attend, making the investigation impossible. The uncooperative councilmen had close ties to the mayor. The investigation was permanently derailed by the delay. 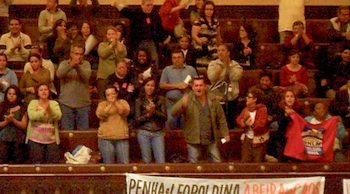 Now in 2011 Eliomar Coelho has proposed a new CPI, this time exclusively addressing evictions around the Maracanã and Porto Maravilha projects, in hopes that a tighter focus would expedite the process. On July 28th, the City Council voted on whether or not to allow the CPI. Residents from threatened communities and representatives from the Conselho Popular gathered at the City Council building to demonstrate in favor of the investigation. Protesters filled the voting chambers with painted banners and chants of “Sign the CPI!” as Coelho and councilwoman Sonia Rabello spoke on their behalf. After two hours, they gathered the required seventeen signatures.

Demonstrators who suspected that the CPI passed too easily were right: later that week, five councilmen retracted their signatures, claiming they had not read the entire four-page document. Rescinding support from a signed document is legal only at the discretion of the
president of the council, Jorge Felippe. Despite vehement objection from Coelho, Felippe allowed it, invalidating the CPI once again. The waffling councilmen’s quick turnabout can be explained by the fact that they belong to smaller, less powerful political parties without specific allegiance to any movement. As such, they rely heavily on the mayor’s favor and must act in accordance with his objectives.

The City Council is currently on a recess, and Coelho plans to propose the CPI again this year. However, favela residents fear that the government will use the next few months to ramp up evictions. The question remains whether the CPI will have any real authority to prevent illegal evictions even if it does pass.