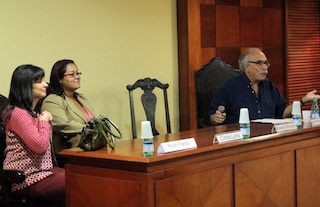 Last week, O Centro Loyola de Fé e Cultura from PUC University hosted the last part of a lecture series entitled “Builders and the Built – the spaces of human relations” which set out to examine the different physical spaces in which human relationships develop. In this last presentation, the theme was the Praça (public square) as a major vehicle of social interaction in the city setting. Invited to speak were Dr. Luiz Fernando Janot, a professor of architecture and urban studies at UFRJ, Roseli Franco, networks director for the NGO Catalytic Communities, and finally Cíntia Luna, president of AMUST (Santa Teresa United Neighborhood Association). An animated discussion followed the presentations as recent government action (or perhaps more appropriately, inaction) has led people to question whether or not ‘free’ and ‘public’ spaces are truly a universal right in Rio de Janeiro.

To give some context to the discussion on the public square, Dr. Janot began by highlighting the evolution of this space, beginning with the public plaza as a well developed urban project designed to bring order to the madness of the medieval city, through today where public squares have evolved to serve consumption: a place where goods can be bought and sold in an easily accessible environment. Regardless of its use, however, its primacy as a means to elicit human interaction in the city setting must not be minimized. The reality is that where there is a physically open area it is likely there will always be some sort of social communication. Whether a place where members of a community establish relationships over a game of dominoes, or a space of conflict and political demonstrations (e.g. Cairo’s Tahrir Square), Dr. Janot drove home the message that these spaces are breeding grounds for social interaction in one’s community. A public setting like the ‘town square’ is unique in its ability to unite people given its nature as inclusive and non-discriminatory. And for this reason, in many South American cities, the public square has remains central to the everyday functioning of the city landscape. Unlike in North America where the development of the automobile led to a process of suburbanization, cities all over South America have preserved their plaza-centered structures and continue to serve as important sites for the public life of the city.

It is only natural then that those who have been purposely denied access to such spaces have reason to believe they have been deprived of a valuable public asset. In Rio, it appears as though the luxury of a well-maintained space for public gathering has been one more thing that residents living in favelas have had to forgo as a consequence of the negative label of informality that has sadly come to characterize these communities. Planning and investment in community projects like that of a public square have been reserved for those living in the city’s asfalto, or ‘formal’ neighborhoods. On the other hand, the idea of planning and constructing these public spaces in Rio’s communidades has been something that the government has consciously shied away from. 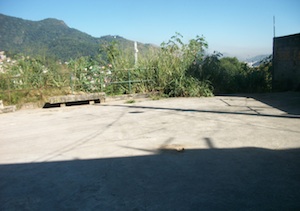 Take for example the community of Morro do Fogueteiro located in the Santa Teresa neighborhood. Here, residents rely on their own skills and resources to create public spaces. As Ms. Luna emphasized to the audience, the fact that a public square exists in the community is the result of residents’ desire to maintain a place of gathering and nothing at all to do with the government, which has abandoned all proposed projects to provide the community with such services. In 2000, ‘Favela Bairrinho’ was introduced in Fogueteiro, which among other things, included plans to build a well-functioning public square. The reality, however, proved to be less than ideal when government workers entered the community, pouring a slab of cheap concrete and labeling that the community’s public space. 11 years later and residents of Morro do Fogueteiro have yet to witness any single attempt to maintain, let alone upgrade this space.

So the question that follows is why the government has chosen to deny residents of Rio’s favelas the free and fair access that a public space is meant to provide. According to these experts, it is a sheer disinterest combined with the fear of providing residents of these communities with seemingly ‘uncontrolled’ spaces. Despite the centrality and vitality of the praça in Rio’s ‘formal’ city setting, the idea of creating such spaces in favelas was never developed. Or rather, it was chosen not be developed.”The interest of the government is to maintain attractive spaces that will be seen. Within the communities, the only people who will see such spaces are the residents and politicians believe that this is not a matter worthy enough to win votes,” said Ms Luna.

Residents of Fogueteiro also feel that the current UPP (Pacifying Police Unit) presence in their community has further undermined their attempts at establishing public spaces. In a later interview with Ms. Luna, she elaborated on her belief that with the installation of the UPP in the community there has been a lot of resistance from the police with regard to people conglomerating together in public spaces. Residents feel that part of the government’s decision to ignore the building and maintenance of such public space is to discourage the use of these spaces that are supposedly difficult to maintain control of.

But the reality is that the threats that come with the ‘openness,’ of these public settings exists whether we are discussing Praça General Osorio in the affluent neighborhood of Ipanema or a tiny praça in Morro de Fogueteiro. Yes, it is true that compared to privately controlled property, public spaces are more likely to be associated with illicit activity, for instance, drug use, which is clearly and understandably a threat to the state. But this is not to say 1) this only occurs in Rio’s favelas and 2) that the state cannot introduce laws that would maintain public spaces while simultaneously eliminating threatening activities. Again, looking at the case of Praça General Osorio, steps were taken to prevent the notorious nighttime activities by closing down the space at night and surrounding the square with gates. Of course, this is less than ideal and the issues with taking such measures warrant their own separate discussion. However, if this was done to allow people living in Rio’s wealthier neighborhoods to preserve their right to the benefits of a public space, then the same should be done for residents of Rio’s communidades.

Last week further threats to public spaces came to pass when residents of the city’s oldest favela, Morro de Providencia, gathered around Plaza America Brum to contest the destruction of their main public square. As part of the ‘Morar Carioca’ project (a government led housing upgrading initiative which has marketed itself with an aim to “unite the divided city of Rio”) the government has announced that hundreds of homes in the community as well as this praça will be removed to make way for the installation of teleférico (cable car). There has also been no mention by the city proposing a new location for the square itself. Furthermore, not only is the future fate of the plaza unknown, but its current use was called into question: when residents wanted to peacefully protest the removal of the plaza on the morning of July 19th, police from the community’s very own UPP surrounded the area and prevented residents from entering. Nothing free, fair or public about that.

And so, as has proven to be the case time and time again, residents of Rio’s favelas will have no choice but to rely on their own devices to keep their right to public spaces alive and well. For now, residents of Providencia have managed to postpone the closure of Plaza America Brum. But nobody knows what kind of tactics will be used in future to deny the rights of residents to use their public space. And as the blueprints demonstrate, the plaza’s fate is a gloomy one.

As the debate that ensued over public spaces drew to a close, the general sentiment amongst people was one of somber realism: “We hope that the government will help us maintain these spaces, as they have done for many public squares in Rio de Janeiro,” remarked one of the lecture attendees, “but the reality is that it is up to the residents to protect these spaces in their community.”