Alongside Christ the Redeemer, Sugar Loaf and the Maracanã Stadium, visits to Rio’s favelas are now firmly rooted on the city’s tourist map. Hotels and hostels offer visitors organized trips to favelas across the city, with an ever-expanding range of alternatives–from more traditional “tours” to culinary experiences, and even “favela paintball” on offer. From large companies to individual entrepreneurs, countless people–most of them not residents of favelas–are now involved in this burgeoning industry.

Yet tourism in favelas is often as controversial as it is popular, accused of being just another manifestation of exploitative, voyeuristic “poverty tourism.” Here we seek to give an overview of favela tourism, examining a few of the alternatives and assessing its potentially problematic aspects, as well as benefits that tourism in favelas may bring.

This boom in favela tourism is a result of numerous factors, but due in large part to the presence of the Pacifying Police Units (UPPs) which have undermined the power of gangs in occupied favelas. This has created an environment far more conducive to outside visits–the average tourist will feel a lot more comfortable walking past a heavily armed policeman than a heavily armed drug trafficker. Without a UPP, says Cleber Geraldo Santos, founder of Turismo no Alemão, in Complexo do Alemão, “you couldn’t even think about tourism.”

A video by comedy group Porta dos Fundos, entitled “Poor”, satirizes an ignorant and clumsy favela tour. As the group rolls in on their jeep, the guide tells them to take as many pictures as they want, adding that “there’s no need to feed them, they’re already well fed.” The group then barges into the house of Sr. Jair, going through his belongings as the guide explains to them the curiosities of the poor person’s house (“an interesting thing about poor people’s fridges is…”). Finally, the guide laments to the group that “it’s hard to find a proper poor person nowadays… If you have anything to give them, please–don’t. We live off this.”

This caricature captures what many, inside and outside the favelas, feel is wrong with these tours. It is voyeuristic; it is patronizing; it stereotypes; and it exoticizes, ultimately serving to reproduce the myths and prejudices that maintain the social conditions which exclude favelas and their residents from the rest of the city.

Jeep tours, where the visitor needn’t even step out into the favela, are an obvious target for their resemblance to a safari. But in Complexo do Alemão, Cleber Geraldo Santos highlights the “humiliation” of residents by tourists who circle above their heads in the cable car, inaugurated in 2011. “We don’t want another safari,” he explains. In fact, as part of his tours around Alemão, whose location in Rio’s largely industrial North Zone makes it a less obvious choice for touristic visits than most South Zone favelas, he wants visitors to take as many photos as possible. He believes that tourists’ photos can be a vehicle for change, with the visibility putting pressure on the government: “[The visitor] sees lots of things that leave him shocked: a lot of trash, and things that are unpleasant. But our objective is that people see this, photograph it, and spread it around the whole world.” 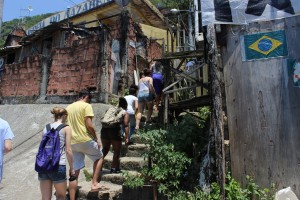 Yet many of the typical complaints can be avoided if the tour is done responsibly. Taking a group of visitors to a favela, most likely a place different from anything they have ever experienced before, will undoubtedly foster a certain level of voyeurism. So much will be new to them that they will be curious to gawk and explore. Yet, as researcher Tucker Jordan observes in his three-part blog post on favela tourism, all tourism is by nature voyeuristic, and one should not fall into the mistake of ruling out visiting a favela just because of this potential.

Perhaps most importantly, it should be stressed that touristic visits to favelas do not qualify as straightforward “poverty tourism.” Put simply, favelas are not “slums,” and not necessarily that poor. A study by Data Favela, a research institute that specializes in the economic conditions of favelas, found that, with the explosion of the “Class C,” 65% of Rio’s favela residents are now middle class. This is not to deny that poverty is a significant problem, but neither those who go on the tours nor those who criticize them should simply assume they are hotbeds of misery and suffering. Indeed, an upshot of taking otherwise naïve tourists to favelas is precisely to show them this. For all the problems with poverty and related issues, favelas are rich places: be it culturally, historically–or, even, economically.

In a Huffington Post article, Gabriela Kruschewesky denounces, without apparently having been on a tour herself, the “exoticization of the other” inherent in the process of taking foreign tourists around favelas. She argues that favela tourism “solidifies the position of the exoticized “other” within a world system where those with more capital and cultural currency can both gawk and eventually take advantage of the presumed lesser.” Her advice to foreign tourists who might consider visiting these “beautiful” but “fragile, complex, unpredictable and problematic” communities is, ultimately: Don’t–“stay at a hotel, cruise the landmarks and safe parts… the alternative is exploitation and promotion of ignorance of an entire people’s reality.” 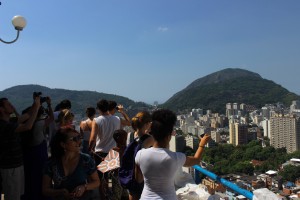 Exoticization is undoubtedly a potential problem. Yet, despite her sympathetic approach, Kruschewesky seems to carry many of the subtle prejudices that, ironically, make an unsqueamish exploration of this “other” an important thing. For years, tourists–and indeed, most non-favela Rio natives–would not dream of entering a favela, because of a plethora of fears. And it is precisely the “otherness” this created that leads to the social exclusion at the core of many problems in favelas.

As Jordan discusses in his blog, foreigners do not grow up with “locally constructed socio-spatial prejudices,” and therefore “easily adopt the narrative provided to them by their guides, tourist agencies and others.” This is as dangerous as it is beneficial, and ultimately all the more reason why tourists must take care with their choice of tours. They can end up repeating what sensationalist tour guides tell them (some guides are said to exaggerate the violence to entertain the visitors), yet at the same time they can embrace the communities with an openness that those who grew up with such prejudices cannot always achieve. Cleber highlights the demographics of the visitors he receives: “99% are foreigners, and 1% is Brazilian. And of this 1%, there has never been a Carioca… until today, no one.” In his opinion, he continues, “Brazilians simply do not want to know about favelas.”

Indeed, some guides take it upon themselves to challenge myths and false narratives. Vitor uses his tours to draw attention to the issues that Santa Marta faces, primarily the lingering threat of house demolitions in the peak of Santa Marta, under the auspice of health and safety. His tours, he explains, are precisely to “give visibility to the threat of removals, something that has had a lot of repercussions,” fostering political consciousness among residents and outsiders alike, “and we manage to maintain [the peak] through this visibility.”

The Favela and the City

There is one final, worrying, implication of tourism in favelas. As observed, the UPPs were important for “opening up” the favelas to outside visitors. As a result, in addition to visiting as tourists, foreigners even began to live in favelas. A recent article, though likely overestimated, put the number of foreigners in Vidigal at 1000. What is the consequence of this? Residents have found their public spaces increasingly monopolized by outsiders, and parties for outsiders prioritized within their own communities, without clear alternatives for them. Simultaneously, Rio’s affordable housing market has not expanded to accommodate those displaced. 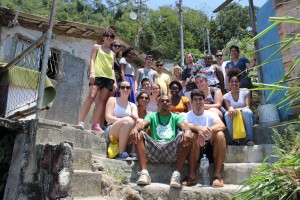 “[Outside] guides say this is a public space and they can do what they want,” says Vitor. “But if it were public, we would have to begin opening the luxury condominiums in Recreio and Barra, so favela residents could also go and explore… So why can they come here but we can’t go there? If it has to be this way then I don’t want anyone inside here.”

All this chimes with the increasingly pressing question of gentrification: as those with higher acquisitive power increasingly monopolize the community, residents see the cost of living rise and their lives become unmanageable. Tourism can undoubtedly be part of this process, for as much as those with an entrepreneurial spirit can capitalize on the economic benefits, it is not clear that these benefits will permeate to the rest of the community.

Ultimately, favela tourism is a complex, and problematic, topic. Yet it should not be dismissed out of hand. As much as it can be vulgar and exploitative, reproducing dangerous narratives and exoticizing the favelas, it can also help to break down these narratives and foster a healthy dialogue about the favela and the city.

In order to ensure that favela tourism is done properly, it is necessary that tourists search beyond big tour companies, and find alternative narratives–ones that aren’t reproduced in mainstream discourse, giving expression to the voices of the communities themselves. Tourists should take note of guides who, such as Vitor and Cleber, try to bring real benefits to their communities, engendering social consciousness and change–even if it means turning the very concept of tourism on its head. And policies, such as rent control in pacified favelas, should be pursued that allow communities to benefit from visitors without losing themselves in the process.

To contact Cleber visit the Turismo no Alemão Facebook page or to contact Vitor email vitor.toursantamarta@gmail.com. Catalytic Communities is also available to connect visitors with community-based guides and translators in a range of communities through this form.