For the original by Douglas Belchoir in Portuguese on his Carta Capital blog Negro Belchoir click here.

Everyone has seen the photo on the left. Brazilian soccer star Neymar with his son on his lap and two bananas, in support of Daniel Alves and in protest against the racism present in the soccer world.

The photo on the right is of the pigmy Ota Benga, who was put on display with the monkeys at the Bronx Zoo in New York in 1906. Ota was taken from the Congo to New York and exhibited to serve as an example of what scientists at the time declared a race that is of inferior evolution to the human race. Ota’s case served to inflame beliefs around the supremacy of the Arian race defended by Hitler. His story is told in the documentary The Human Zoo.

The comparison between blacks and monkeys is racist in its essence. However, many people don’t understand the seriousness of using the monkey as an offense, as an insult to black people.

I found this story in an excellent article I read recently, which also drew on the reflection of James Bradley, History of Medicine professor at the University of Melbourne, Australia. He wrote a paper with the title, “The Monkey as an Insult: A Short History of a Racist Idea.” He concludes with the statement: “The education system does not do enough to educate us on the science and history of the human being, because if it did, we would see the disappearance of the use of the monkey as an insult.”

No, dear Neymar, we are not all monkeys; at least not for the purposes of using this phrase or idea as a tool to combat racism. 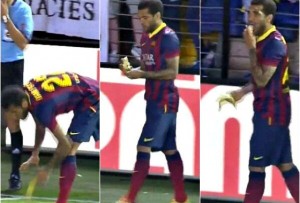 But it is good to separate the two: one thing is Daniel Alves’ reaction, eating the banana thrown on the pitch, a commonplace and evidently racist act by members of the crowd; another thing is the campaign, promoted by Neymar, in support of Daniel and to denounce racism.

In Brazil, the majority of soccer players come from poorer social classes. Even though this is changing, because soccer has changed, this is still true. Among these players, the majority of those that achieve great success are black. In their search to succeed in this career from an early age, few of them continue their studies. The “extremely talented ones” are increasingly discovered at earlier ages and after reaching the superstar stage they live in a different world, in a bubble. Few have been able to combine sporting genius with intelligence, and when the subject is racism, the tendency worsens.

And Daniel ate the banana! Irony? A form of protest? Intelligence? Well, he responded in an interview following the game:

“It has to be this way! We are not going to change. I’ve lived with the same thing for eleven years in Spain. We have to laugh at these idiots.”

It’s a stance. There is nothing to interpret. He elaborated an objective reaction to racism: let’s ignore it and laugh!

There is an African proverb that says: “Each person sees the midday sun through their own window.” From the place in which Daniel speaks, as a sports star who earns millions, who has a settled life in Europe, who has a place in the national Brazilian soccer team, this is the best response and the most comfortable one: ignore and laugh. Let’s make it a joke! Let’s look at these racist idiots and say: I am rich you idiot! I am famous! I have five Ferraris! You can throw as many bananas as you like!

Racism bothers and affects them, but how? After all, they are rich! There are those that say “become rich and the problem is resolved” or “it’s a class problem!” The economic element softens the effect of racism, but it does not eliminate it. In this sense, the racists and the bananas lend a service: they remind these boys that they are black and that money and fame do not make them white! 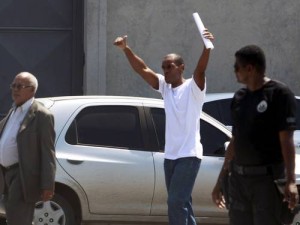 Daniel Alves, Neymar, Dante, Balotelli and other top, high-paid soccer players have very little chance of being confused for robbers and imprisoned for a few days like in the case of the actor Vinicius; very little chance that they will disappear, after being tortured and killed, like Amarildo the bricklayer; nothing indicates that their bodies will be dragged behind a police car like Cláudia, or even that they will have to run from the police and end their life with their bodies being thrown in a crèche. Despite the bananas, they will hardly be treated like animals in seeking a dignified life as refugees in a cordial country, with frank and real democracy, like the hundreds of Haitians have been doing in Acre or São Paulo.

Racism doesn’t affect them like that. But it does affect them. And their reaction is proportional. It falls to us to say that their reaction does not serve us! It is not possible for us black Brazilians, and blacks from all over the world, who do not have the talent (or luck?) to become superstars to eat the banana made of dynamite or suck on the sweetie guns, or to peel the skin off the knives. We can paraphrase Daniel inversely: “It does not have to be like this! We need to change! We have lived with the same thing here in Brazil for more than 500 years. We have to change these idiotic racists, especially those dressed in uniforms and ties.”

Regarding Neymar, he is great with the soccer ball. And like almost all soccer geniuses, he accumulates intelligence at the tip of his toes. He poses with his blonde son, without understanding that, by being blonde, even if you were to hang a bunch of bananas around him he would never be called a monkey. The offense in this case would not make sense. But we have to think: was his way of opposing racism a marketing trick or just goodwill? Whatever it is, it does not help us. 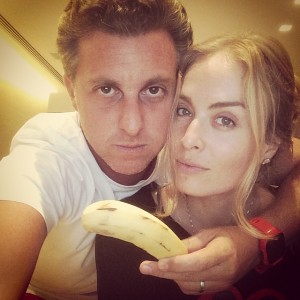 I am black, born in a country where violence and poverty are projected for the lives of the majority of the population, which is black. Dear Neymar—but no: Luciano Hulk, Angélica, Reinaldo Azevedo, Aécio Neves, President Dilma Rousseff, celebrities and the media who, in general, exalted the “devouring of the banana” and now are sharing photos grasping the delicious fruit–in this country, like in the rest of the world, the comparison of a black person to a monkey is culturally offensive.

As a black person, I do not allow it. The banana is not a weapon nor does it serve as a symbol to fight racism. On the contrary, it reaffirms racism in that it relates the target to a monkey and mainly in the extent to which it simplifies, disqualifies and, worse, makes fun of the debate about racism in Brazil and in the world.

Racism is very serious. We live with an astonishing escalation of racist violence in Brazil. This depoliticized and alienating reaction and stance by sports players, artists, opinion makers and politicians has a certain objective: cover up the real meaning of racism which is represented in bananas thrown on a football field to the genocide of black persons that continues all over the world.

I love bananas. We always have them here at home. And I think that monkeys are incredible animals, intelligent and strong. I love the film Planet of the Apes and every time I watch it, especially the first one, I think how much human beings deserve the same punishment. We came from monkeys and the history of evolution of our species is beautiful. But if it is to associate the origins, why not say #WeAreAllBlack? Why not say #WeAreAllFromAfrica? Why can we not remember that we all came from Africa, everyone and all colors? And, because of this, racism in all of its forms is stupid and incompatible with human evolution? And if we are, why do we treat each other this way?

But, no. And you people continue “looking over here, curious, of course. No, no, and no, no it is not the zoo.”

So no bananas, no monkeys, please!