For the original in Portuguese in O Dia click here.

Uproar as the first repossessions commence in the area disputed by 621 families.

Rio–The Brazilian Federal Government may reconsider the issue of occupation in the Jardim Botânico area by families descended from employees of the Botanical Gardens institution, who were allowed to live within the park limits at the beginning of the twentieth century. The Secretary General of the Presidency’s Cabinet, Gilberto Carvalho, confirmed on Monday May 5 that he intends to present the case to President Dilma Rousseff, for her consideration. 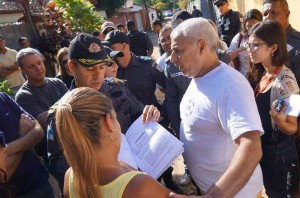 President of the Residents and Friends of Horto Association, Emilia Maria de Souza, said the idea was contemplated in a meeting with the Secretary General and community representatives last week, and was motivated by residents’ resistance.

“The minister told us that the government might change its opinion on the Horto removal,” said Emilia, who criticized the Botanical Gardens director: “but the president of the institution wants to accelerate the removals, contradicting a decision from the top.”

The first removals in the disputed area were carried out on Monday. Justice officials and Military Police performed the repossession of Caxinguelê Club, a leisure area built 60 years ago, used and administrated by the community living within the limits of the Botanical Gardens, inaugurated by Don João VI in 1808.

The legal dispute between residents and the Botanical Gardens, a federal institution, began in 1990. The area, located in the current district of Horto, was given to workers by the park’s administration at the beginning of last century. Since then, 621 families have settled in the community. 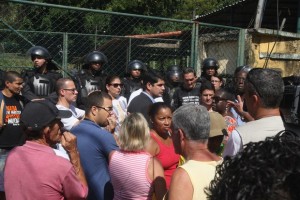 Horto residents fear their homes will be next in the line of fire. According to Emilia de Souza, 14 cases are passing through the courts and demolitions could happen this week.

During Monday’s operation, police used non-lethal weapons and pepper spray to disperse the crowd of residents and activists resisting. In the confusion, two protesters were injured by rubber bullets. “They used force unnecessarily, we were compliant,” said Leonardo Leal, a student who was hit in the armpit.

In a release, the Military Police alleged, “it was necessary to use non-lethal weapons to prevent people from reentering the area.” The president of the Botanical Gardens, Samyra Crespo, claimed the judicial decision had been issued a year ago. She also stated that an orchid greenhouse would be installed to replace the club.

The Alto Jardim Botânico Neighborhood Association did not respond to O DIA‘s requests for comment before the closing of this edition.