While finishing up a news story for my current employer, a foreign news agency emailed me asking if any vehicles were on fire because of that days’ bus strike. They’d seen footage from the last time the citizens of Rio made their feelings known and were looking for something in a similar shade of Angry Violent Brazilian. They didn’t mention the middle class workers who couldn’t afford their basic needs and focused on large things burning because, of course, “that’s what makes good TV.”

Though I couldn’t see anything on fire from my Copacabana hotel room, I checked some local sources to see if there was anything with wheels being burned anywhere and found that on this night, the protesters of Rio were keeping their anger to themselves. 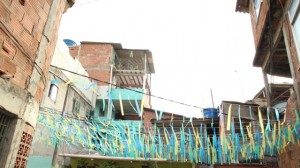 When I relayed to the foreign (let’s call it American) news agency that nothing relevant was on fire, but that I could probably get them an intimate portrait of one of the bus drivers on strike, the emails stopped. No carnage, no story.

As someone who only gets paid when someone buys the stories I’m selling, I thought about writing them back and pitching something using buzzwords like “favela violence” or “police shot/killed…” or simply “FAVELA!!!”, but I thought it best to finish the work I was currently being paid for.

Every journalist talked with regret and helplessness. There are stories here with more depth that deserve to be told, but that’s not what’s selling. 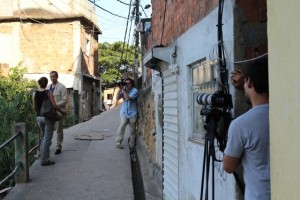 I’m not immune to this formula. I’ve interviewed several protesters, strikers and people simply upset with the Brazilian government. As I’m here to cover World Cup-related stories, I pushed them to mold their experience to the World Cup, even if all they really wanted to talk about was wondering how they were going to feed their kid the next day.

One journalist said the reason it’s like this is because television news feels it’s competing with reality television. If a majority of the country had to choose between a thoughtful profile of a family from another country trying to make ends meet and a faux-famous family on a luxury vacation, apparently they’ll always choose the latter.

But that’s not my taste and it doesn’t seem to be the taste of the journalists I spoke to. But are we the audience? Apparently not. News agencies and TV networks seem to only care about whether males aged 25 to 49 are going to look up from their iPhone for a few minutes and they believe the only way that’s going to happen is if something’s on fire or more importantly, something “could” potentially be on fire.

Has the media trained the viewing public or is this what the viewing public really wants? If all the news outlets decided to stop focusing on scaring us and turned their attention to a well-rounded, moderate telling of the facts, would the soccer moms in Iowa revolt? 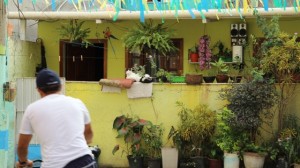 The truth is that while of course there are some terrible things happening in some of the hundreds of favelas in Rio and there have been necessary protests and there are threats of more, there are many, many more stories that can and should be told. For example, the Asa Branca favela is the happiest place I’ve been to in Rio yet it’s three decades of remarkable architectural progress is being threatened by wealthy developers. The recently evicted residents of the former Telerj complex I spoke to turned down the offer of Bolsa Família, Brazil’s cash transfer welfare program, because they didn’t want a handout, they just want a roof over their heads. And in Maré, the site of the latest police occupation, there is inspiring community organizing and engaging public security debates happening. 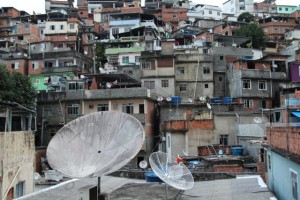 Would people around the world care about these stories? Isn’t part of our job to educate? When you look at the accompanying photo what do you see? Do the words “slum” or “poverty” come to mind? Or do you see history and culture and what can only be viewed as a remarkable architectural achievement?

Fear and sensationalism are easy to produce. Stories with depth take time. Take time to make. Take time to watch. News agencies want 15 seconds of a bus on fire, 10 seconds of someone yelling angrily into a camera, and a five second quote to put fear into World Cup tourists.

All of us–journalists, editors, and those with the remotes in our hands–owe it to the people on the ground and to ourselves to do much better.

Catalytic Communities offers support to journalists looking to cover Rio’s favelas and has compiled a list of community contacts across the city with story ideas and themes in a spreadsheet and map for contact during the World Cup. For more information click here or email worldcupmedia@catcomm.org