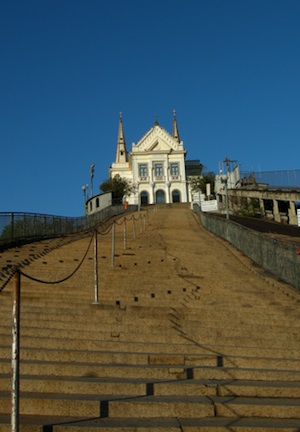 Visitors arriving in Rio de Janeiro are greeted not by Copacabana or Christ the Redeemer, as the postcards suggest, but by a white church perched atop a domed hill. It is the first landmark visible from the international airport, the Rio-Niteroi Bridge, and major freeways. The Santuário de Nossa Senhora da Penha, or simply the Igreja da Penha (Penha Church), was constructed in 1635. According to legend, a local landowner was hiking when a large snake appeared in his path. Fearing for his life, he prayed to the Virgin Mary, and an even larger lizard appeared and attacked the snake. He built the church on the spot to commemorate the miracle. In 1817 a patron built a staircase from the bottom of the hill to the church, carved into the face of the rock. The church became a world-renowned religious pilgrimage site; the faithful climb the stairs on their knees in a show of gratitude for granted prayers.

Despite its dramatic setting and accompanying legends, the Igreja da Penha is almost unknown to people outside the surrounding neighborhoods. Like Rio’s other iconic monuments, the statue of Christ the Redeemer and the tram to the Sugarloaf, it is a man-made wonder set atop a stone peak, with a stunning view of the city below. It used to be one of the most popular tourist attractions in Rio, and the only one in the North Zone. However, drug wars in Penha scared most visitors away.

The government’s “pacification force” invaded and occupied Penha and Vila Cruzeiro in late 2010 to drive out drug traffickers. The church played an interesting role in the drug trade and the pacification process. According to O Globo, Rio’s lagest daily, drug traffickers used its tower as a lookout point to monitor police movements in the favelas below, to the chagrin of the archdiocese. After the police force entered Penha, people began to return to the church. More than 5,000 people filled the temple for Christmas mass in December 2010, as compared to the meager 200 of 2009. Father Serafim Fernandes, the rector, sees the Igreja da Penha as central to the neighborhood’s renewed hope for peace. The church has hosted various vigils for peace in the past year, and attendance is steadily growing. 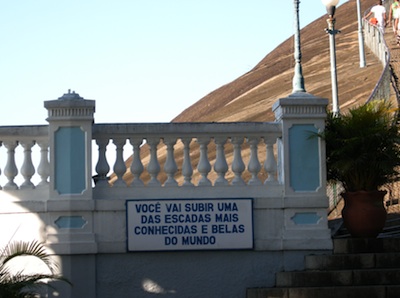 The Igreja da Penha is poised to regain its former popularity as Zona Norte’s key tourist attraction, but a recent action by the city government threatens it with visual as well as cultural obscurity. In June 2011, the City Council approved a bill introduced by Mayor Eduardo Paes to change the urban plan (Projeto de Estruturação Urbana) governing new development in Penha.

The new plan, intended to “revitalize” the neighborhood, allows the construction of buildings up to eight stories, and eliminates the area of special interest (Área de Especial Interesse) designation that protects the church as cultural patrimony. O Globo claims that taller buildings will not block views of the church, but according to City Councilwoman Sonia Rabello, the new plan radically alters the old one without residents’ consent. In addition to allowing taller buildings, it changes zoning designations to allow freer real estate speculation, and removes provisions for low-income housing. 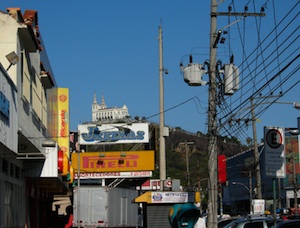 Members of the Penha-Leopoldina Resident’s Association demonstrated at City Hall in late July, demanding a voice in the procedure. They allege that the new plan was written in unnecessarily dense language to prevent anyone from understanding it and objecting (you can judge for yourself). Councilwoman Rabello’s blog details the problems with the new plan: it encourages inflated property values and speculation without making any provisions for public space, housing, or infrastructure. Rabello proposed a return to the original plan in early August, but the vote was delayed.

In the end, the aesthetic threat to the Igreja da Penha may not be the most significant element of the new plan, but it does crystallize the issues at stake. By removing the cultural protection from the Igreja da Penha, the government sends a clear message about whose heritage is worth protecting, and what deserves to be seen. It treats scenic views as a luxury unavailable to residents of the North Zone. In a city famed for its hilltop monuments, the new urban plan threatens to obscure the most visible icon in the largest and most populous part of the city, not to mention a symbol of recovered hope in a troubled region.