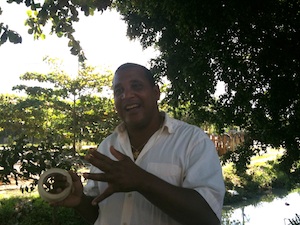 August 10, 2011–Debates on urban policy tend either to be basically theoretical–who wins, who loses, and why–or else technical: this regulation, that subsidy; this legal process, that funding source. But Carlos Alberto “Bezerra” Costa, President of the Neighborhood Association for the community of Asa Branca, is a reminder of how much urban development can be directed, not by theory or policy, but by personality.

As head of this self-built, self-contained neighborhood on a flat plain in Jacarepaguá, Bezerra is the resolute captain of a ship rocked by the first waves of the Olympics’ turbulent waters. A short walk to the south is the planned Olympic Park, slated to completely eradicate the homes of his neighbors in Vila Autódromo. To the west, on the other side of the Avenida Salvador Allende, loom the towers of Morada dos Passarinhos, yet another gated condominium development in the West Zone. And running up the Avenue itself, along the northwestern edge of the community, are plans for the TransOlímpica Bus Rapid Transit (BRT) line, which will connect the Olympic Park with another Olympics cluster at Deodoro, in the north. 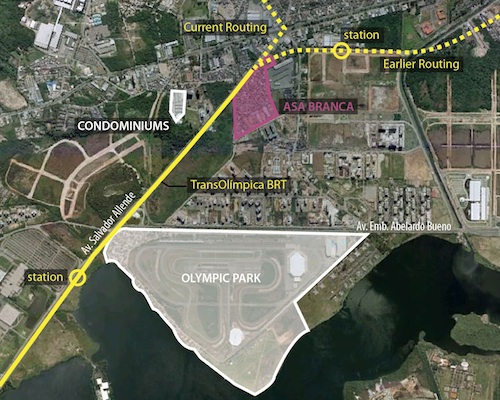 Bezerra’s wide-eyed, almost boyish affability softens his imposing frame as he stands at a crossroads of two of Asa Branca’s residential streets, and at a crossroads of the neighborhood’s future. Periodically pausing to let a boy zip by on his bike or an elderly passerby pontificate cheerfully, he reflects on some of the community’s recent and imminent changes. The city has informed the community that approximately thirty residences will be condemned to make way for the BRT route. (The exact rationale for these evictions is difficult to pin down. While an early promotional video shows the corridor shaving off part of Asa Branca’s northern-most territory, the route currently displayed on the official site for Olympics development shows no such intrusion.) Whatever the ultimate outcome, Bezerra is working to keep as many displaced residents within the community as possible. He is pragmatic in his dealings with the city: strategically combative when he thinks he can get concessions; cooperative when he is resigned to their position.

In addition to a mass transit artery being rolled out on its doorstep, other changes are in the works for Asa Branca. Because of its proximity to the Olympics Barra cluster, the community has been prioritized for urbanization through the Morar Carioca program. Planned for the community are health clinics, land titling, and improvements to the sewerage system. So far, the community has had little input into the formulation of these projects, and Bezerra’s stance has had to be mainly reactive. He plans to negotiate with the city to get the health center built outside the original footprint of the neighborhood, again to minimize relocations. 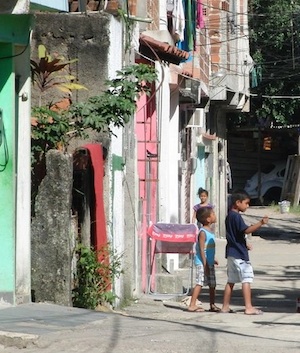 At face value, Morar Carioca will improve the quality of life in Asa Branca, but these improvements could be a mixed blessing. With urbanization and better services, the community becomes more conducive for formal development. With nearby sports venues and transportation infrastructure, it becomes attractive to middle class households. And with land titling, it becomes commoditized for property owners to sell on the open market. Together these ingredients constitute a recipe for gentrification, the displacement of lower-income households, and the breakdown of community cohesion and character.

Even today, there are signs the neighborhood is becoming less communitarian and more transactional. One example of this is the waning practice of mutirão. Mutirão is the word communities like Asa Branca use to describe the collective effort of construction, where residents band together, without monetary compensation, to build dwellings and local public works. In Asa Branca, many of the original private structures as well as the sewage system were built with a mutirão, which is today becoming less popular as the neighborhood becomes more established and residents prefer to pay fee-for-service when improving their properties. Fewer residents contribute to the upkeep of the sewage system, which has suffered as a result. 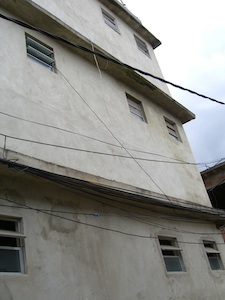 In a second trend suggesting a decline in community cohesion, Bezerra describes the increasing incidence of renters – specifically of the “kitchenette” dwelling type, where a property owner will construct efficiency apartments designed for singles. As many as 20 kitchenettes can be fit into a three story building on a standard sized lot, and many of these units are rented to laborers that have arrived from outside Rio to construct the condominium complex nearby.

Bezerra is trying to collect money to improve the Neighborhood Association Center, with a party area replete with barbeque grill on the roof, and renters are the most difficult to collect from, as they feel less of a stake in the community.

Still, Bezerra takes pride in what remains a strong community identity. He greets residents playing a game of cards along the main commercial corridor and promotes an upcoming show being staged by a local performance troupe. On his way to visiting the troupe’s rehearsal, he crosses the Av. Salvador Allende, today home to horses lapping water along its roadside trenches, and tomorrow home to one of Rio’s major transportation corridors. In the avenue’s median he stops suddenly in mid-sentence, his attention turning to a water main exposed by a hole dug in the ground. Before getting on his way, Bezerra squats down, reaches into the hole, and adjusts the valve. In his precarious position protecting Asa Branca from the maelstrom of the Olympics, everything will require a human touch.