More than 18 months after its completion, the cable car of Morro da Providência was finally launched Wednesday, July 2. Both Mayor Eduardo Paes and Governor Luiz Fernando Pezão were present at the opening ceremony.

Cable car for who? 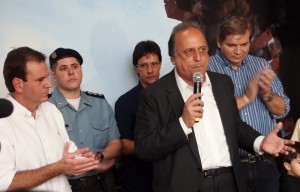 Paes opened the ceremony apologizing for the delay in launching the cable car. In his speech he admitted that dialogue with the community had not been properly conducted, and had provoked the halting of the Morar Carioca interventions in the community last year. He said he was however proud to be presenting the project to the city and excited about what it would mean for the Port region.

Both Paes and Pezão emphasized the touristic value of the new cable car. According to the Mayor: “Today, we are not only gaining an urban mobility service for the residents of Providência, but we are also gaining a new touristic service for the city.”

Pezão underlined how great it was to, at the height of the World Cup, give the city “this gift.” 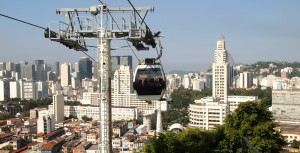 The timing of the launch has led many to question the intentions of the government. Other cable cars and large-scale infrastructure projects in favelas have been accused of being “para inglês ver.” They have benefited the public image of the city more than the affected communities.

Pezão said that while the launch coincided with the World Cup, the legacies–in terms of urban mobility and the new health clinic and digital center in the Gamboa station–will last forever. Still, there is no doubt that opening these projects now, with the world’s eyes on Brazil, is a great marketing opportunity for the City. In the words of Paes: “The tourists, foreigners, those who are visiting us now, are saying that this is proving to be one of the most organized World Cups in history. This is how we move forward, through showing off our country and our qualities, without forgetting our flaws and problems.” 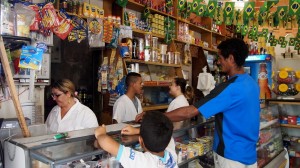 While the process surrounding the construction of the cable car in Providência has been long and conflictual, on Wednesday the atmosphere was one of anticipation. A long line of residents had lined up at the Praça Américo Brum in the center of the community to take the inaugural trip. One of the most eager passengers was Elson, certain the cable car would bring more work to the community. He was also sure it would improve mobility. He only had one fear, he said, looking teasingly at his friend who has a history of heart problems: “He’d better not have a heart attack on the way down!”

In the small bakery next to the Américo Brum station, people were cautiously optimistic. Shirley, who runs the bakery, is hopeful it will bring more customers. The station today is an enormous edifice that takes up the majority of the old Praça Américo Brum square. “Before, there was always life on the square; people would sit around for a couple of beers, something to eat. When construction started, business went down 70 or 80 percent,” she lamented. 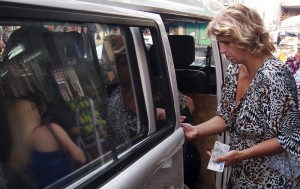 At the same time, prices went up. Providência received a Pacifying Police Unit (UPP) in 2010, and as with other pacified favelas, the cost of living has increased significantly. “Before, we did not pay much for electricity. Look at how much we have to pay now,” said Shirley, finding last month’s electricity bill. It was R$257 (US$115), higher than in many South Zone condos, and even more when considering that the average income in Providência according to the 2010 Census was R$439. Shirley therefore now hopes that the cable car can bring tourists and therefore more business for the small shop.

At the bottom of the hill, the mood was more pessimistic. Daisy, who works as a cash collector for the vans that drive passengers up and down to Providência, worried what the cable car would mean for their service. The vans will continue to run, but she has no doubt they will lose many clients.

Who gains in the long term?

Some has already been written about the process surrounding the construction of the cable car in Providência and the consequences of other government projects in the community. Because of its central location and fantastic views, the community has suffered rapidly increasing costs of living since the launch of the UPP. The cable car, linking the community to the Port Zone on the one hand and the city’s central transport hub on the other, will surely accelerate these trends. With the forced removals carried out for the cable car, loss of the community’s main public space, lack of participation, stalled necessary infrastructure works and increasing costs, critics and residents alike continue to question what the real intended legacy of the project is.