The Brazilian Federal government´s Growth Acceleration Program (Programa de Aceleração do Crescimento, or PAC) was launched in 2007, with the stated mission of aiding economic growth through a substantial investment in infrastructure. In Rio de Janeiro, among other things, the program urbanizes favelas by improving sanitation, housing, transportation, and access to utilities. 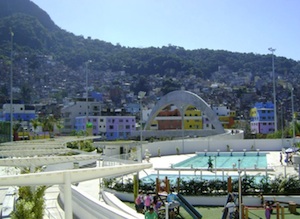 In the case of Rocinha, Rio’s (and the Americas’) largest favela, PAC set ambitious goals: to build an Olympic-standard sports complex and health clinic; replace the passarela, or footbridge, at the community’s entrance; widen main thoroughfares Rua 1, Rua 2, and Rua 4, to allow greater access between neighborhoods; redesign the popular market; and cover the open sewer known as the Valão (big valley).

PAC’s completed projects are visible from the Estrada Lagoa-Barra, the freeway that runs past Rocinha to São Conrado. Rocinha’s footbridge is now a graceful concrete parabola designed by Brazil’s most famous architect, Oscar Niemeyer, and the bright white-and-blue sports complex and clinic have been serving the community for a year and a half. The redevelopment of Rua 4 is one of the finest examples of urban renewal in Rio: new housing projects and public spaces complement the community’s architectural style, and fit seamlessly into the surrounding environment. Even the much-maligned rainbow paint job on the buildings facing the freeway looks pretty nice. 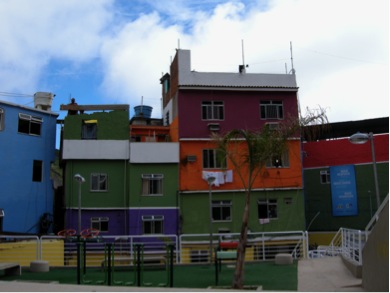 Not surprisingly, however, the projects that remain unfinished are less glamorous but more urgent.

In July 2011, O Globo announced that all projects in Rocinha would be put on hold until further notice, while the Rio de Janeiro State Department of Public Works waits for R$51 million in federal funding. PAC has spent R$219.3 million in Rocinha already. The Department claims that they went over budget because widening Rua 4 from a narrow alley to an open ramp created unforeseen drainage problems. The ramp connecting Rua 1, at the top of the hill, to the main street, will not be completed. Instead of connecting Rua 2 to the Rua do Valão, at the bottom of Rocinha, the government has proposed building a gondola similar to the teleférico in the Complexo do Alemão, but it gave no timeline for this project.

Carlos Pereira de Jesus, a longtime resident of Rua 2, was unaware that PAC had stopped its work in Rocinha because the government didn’t make an announcement. He was outraged that PAC spent R$15 million on the passarela before making improvements to his neighborhood and the Valão. Rua 2 remains narrow and congested, without a direct connection to the main streets of Rocinha.

The Valão (the word refers to the open sewer and the neighborhood around it) is in dire need of PAC’s help. The sewer is at the bottom of Rocinha, and the trash and waste from higher neighborhoods drain into it. It runs through a concrete channel about 12 feet deep and 15 feet across, and its flow is choked with trash and debris. The gray-brown water rises alarmingly after a rainfall. There are sporadic sections of rebar railing and plywood covers, but for the most part the sewer is totally open. It’s not uncommon to see kids jumping in after runaway balls and fishing for salvageable electronics. The neighborhood is steeped in the smell of sewage, making it one of the least desirable parts of Rocinha. Crews of city sanitation workers dredging the Valão have been a fixture for the last few months, but no real progress has been made. 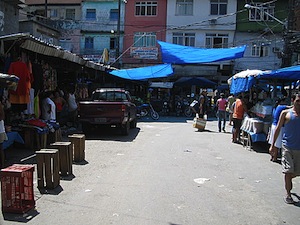 The redevelopment of the Boiadero, a large space between the Valão and Via Apia, is another project that never got started. On Sundays the Boiadero fills up with stalls selling produce, spices, freshly butchered meat, household goods, and pets; during the rest of the week it is packed with moto-taxis and food stands. The Boiadero in its current state is sufficient, but like much of Rocinha it needs new pavement and more frequent trash collection. After a Sunday market the streets are heaped with rotten fruit and cow bones because there aren’t any public waste receptacles.

At first glance, the Complexo Esportivo da Rocinha (Sports Complex) seems like one of PAC’s greatest achievements. It is part of a citywide initiative to improve sports facilities in honor of the 2016 Olympic Games in Rio. The complex houses a pool, football field, and outdoor gym, and offers free capoeira, judo, and boxing classes to kids and adults. The instructors, all from the community, are distinguished in their fields, and attendance is high. Unfortunately, bad design and disregard for instructors mars the complex.

Dionísio Lazário, former Brazilian middleweight boxing champion, teaches boxing at the complex. The fighter, known as “the Mike Tyson of Rocinha,” has had numerous conflicts with PAC’s administration. After inviting Lazário to be a part of the project, ostensibly to cultivate new champions and Olympic fighters, PAC officials told him that boxing was not a “viable” sport. They repeatedly changed the schedule or cancelled classes without warning. On one occasion when American and German fighters were visiting the class, an official told everyone to leave because the complex was closing. Lazário was not even trusted with the key to the gloves cabinet, forcing him to keep his students waiting. “They left me with my hands tied,” says Lazário.

Once again, the issue of sanitation was not properly addressed. The Valão drains under the Estrada Lagoa-Barra into a large uncovered sewer in the center of the sports complex, a few meters from the martial arts classrooms. Unpleasant on a winter day, the smell becomes nearly unbearable in the heat. Attendance has dropped because students feel too sick to exercise near the sewer, and instructors complain that the smell stays in their clothes all day. Most alarmingly, people have observed tapuru (a parasitic worm that enters through the foot) breeding in the sewer. To make matters worse, the septic tanks for the complex’s bathrooms are in the boxing classroom. Dionísio Lazário tried to discuss these design flaws with PAC engineers while the complex was under construction, but they ignored him.

PAC’s ambitions for Rocinha were impressive, but without funding or coherent plans, the program will fall far short of the community’s expectations.