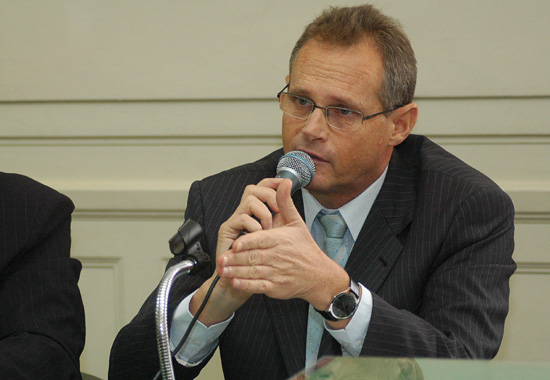 Secretary Beltrame spoke in a quiet, determined voice to a captivated audience. His confident manner and tone expressed his conviction that the pacification program was working, despite news of corruption, sustained trafficker operations, and continued violence.

“There are places where [the homicide rate] has dropped to zero…homicide influences human development…” Beltrame defended the process of pacification, and was adamant that the pacification program would be a permanent fixture, regardless of himself, making a distinction between himself and the office he currently holds, of the Secretary of Public Security.

Beltrame also discussed the pace of the pacification process: “I do not intend to launch more UPP communities if I am unable to build foundations first…we’ve been adjusting certain things since we started, that are just not right.”

Beltrame called for a complete transformation of the Rio Military police at the seminar–even to the point of changing their “war chants,” songs used to motivate recruits. He drew a hopeful picture of the future for the UPPs in Rio, and, while he acknowledged the difficult road ahead, he exhibited faith and determination in their ultimate success.

Percília da Silva Pereira, a community leader in Babilônia (one of the first four favelas to be pacified), sat on the panel with Beltrame. As she gave her account of how the community has been transformed since the UPP entered, she paused to thank the Secretary numerous times for the UPPs–and the sense of security that has stemmed from their presence in Babilônia.