Residents from Complexo do Alemão launched a Twitter campaign to alert the media of the shootouts that have been rampant in the community since the end of the 2014 FIFA World Cup. The event was planned by the Facebook page Complexo Alemão and promoted over several days after 3 people were shot dead and 19 hit by stray bullets in conflicts between police and drug traffickers over the course of 15 days.

The administrators of the Facebook page said they planned a social media event because they don’t feel safe enough to protest on the streets.

The hashtag #SOSComplexoDoAlemao was used to tell stories of police brutality and express frustration at the security policies currently implemented in Complexo do Alemão. The area has been occupied by the police since 2010 and has four Pacifying Police Units (UPP) that have as a mission to keep the peace within the 15 favelas that make up the favela complex.

Although in some favelas, particularly those with early implementations of the program in Rio’s South Zone, a greater number of residents than not view their UPP as successful, residents of Complexo do Alemão, in the historically marginalized North Zone have not had such a positive experience. There is widespread disapproval of the police’s presence in their community. Many say they felt safer four years ago, before pacification, and that gun violence is much worse now.

In a string of tweets, resident Thãina Medeiros said: “They promised that with the UPP, a new period of peace would come! THEY LIED! But they got votes! I’m tired of hearing reports of abuse of authority and lives taken away. The violence here is old, the first time I saw a dead body, it was of a dead ten year old. I was eight. I still see the same quantity of guns, but I think the frequency of shootouts is higher.”

Another resident, a mother whose son was shot dead, tweeted: “I want to know how a pacifying unit can be so violent. We want peace!”

Throughout the four principal hours of the event, the police were consistently described as “abusive,” “murderous” and other variations. Residents vented about their experiences with violence in their community and explained that their only “crime” was to live in a favela. Others questioned the status quo and how favelas are often used for the rich to profit, but forgotten when help is needed.

Alessandro Oliveira said: “We’ve been a stage for soap operas, documentaries, now we are the stage of a war where the victims are innocent.”

Many tweeted about the intersection of social status, race and violence.

Raull Santiago said: “In this society prejudice is disguised by ‘miscegenation,’ but the death of the poor is applauded. It’s sad. First time I saw a dead human being I wasn’t even seven years old… Today, I am 25 and I still see a lot! Police and drug traffickers, both armed, one in front of the other… killing each other for the #PEACE of the powerful’s money!”

Maycom Brum added: “The police is more racist than ever!”

According to the hashtag tracking website Keyhole, the hashtag #SOSComplexoDoAlemão had a reach of half a million people around the world. Tweets originated mainly from Brazil, but people from the United States, Portugal, Sweden and Australia also joined in to ask for peace.

The narrative remained the residents’ throughout the event, who are planning more social movements in the coming weeks to stop the violence in the Complexo. 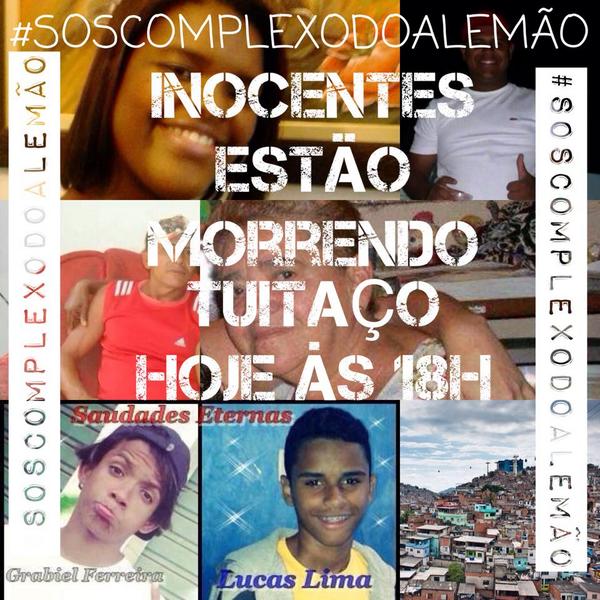